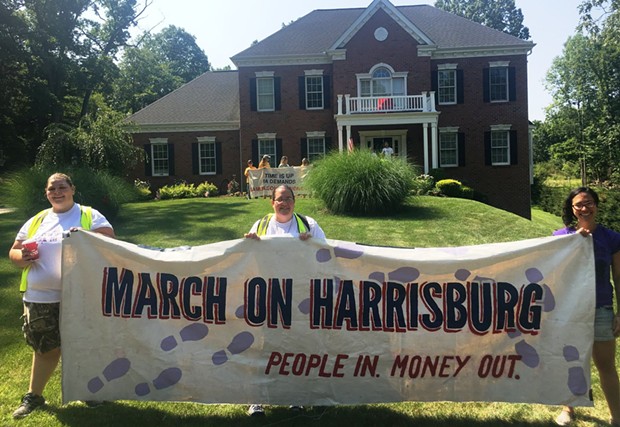 Photo courtesy March on Harrisburg
Protesters in front of Mike Turzai's home
The process to fix Pennsylvania’s gerrymandering problems has hit a snag. Over the last couple months, proposed bills have either been held up or completely rewritten.

On July 13, fair-district advocates protested at the home of Pennsylvania House Speaker Mike Turzai (R-Marshall). Six protesters were arrested, including one Turzai constituent, Carol Ballance of the North Hills.

“I have been fairly involved in this fight for fair districts all year,” says Ballance. “Speaker Turzai does not return our calls, and doesn't answer our emails. I am one of his constituents. I pay him. He is not doing his job.”

Turzai spokesperson Neal Lesher said the speaker has no comment for this story.

This was the first time Ballance has been arrested. She says she will continue to protest until Turzai calls the state House back into session and brings up Senate Bill 22, which would create a non-partisan group to draw district maps.

The six protesters were arrested by Northern Regional Police and charged with defiant trespass, according to news site The Incline. The group is part of March on Harrisburg, a grassroots coalition that is advocating for redistricting reform, but is separate from anti-gerrymander group FairDistricts PA. March on Harrisburg also recently protested in front of Democratic Gov. Tom Wolf’s home in York.

Ballance says she felt compelled to join the fight for fair districts because of her faith. She is a member of the Unitarian Universalist Church of the North Hills.

“I look toward building an equitable society and gerrymandering is the antithesis to that,” says Ballance. “It is so undemocratic and it has led to voter apathy.”

Ballance notes town governments within Turzai’s North Hills district have passed resolutions asking the state legislature to pass gerrymander reform. She says that if Turzai doesn’t help to move a clean fair-district bill through the state House, she will help support his political challenger, Emily Skopov.

“[Turzai] is up for election in November,” says Ballance. “We will be reminding folks that he was the opposition to getting this done.”