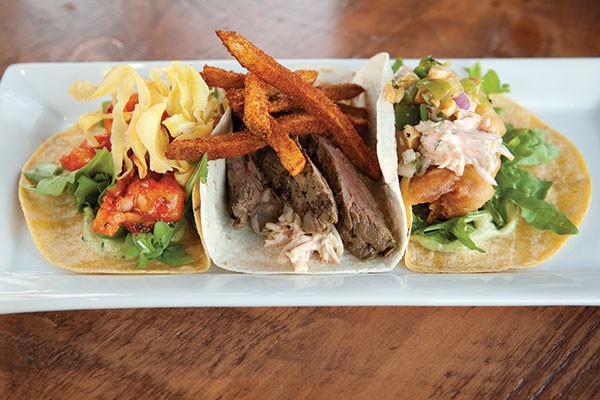 Like the enchanting sirena — mermaid — of legend, Sirena Taco Joint and Bar lured us to the shoals of suburban McMurray with its song of tacos. OK, maybe that's the song we wanted to hear, but it sure sounded good: Take some classic Mexi-Cali combos, add some trans-national twists (bulgogi, jerk chicken), and the humble, hand-held taco — already one of the world's most glorious and versatile street foods — becomes a palette for recombining world cuisines, one tortilla at a time.

Sirena's location in far-flung McMurray didn't faze us in the least. Not only have we grown accustomed to finding culinary sophistication even pretty deep in the suburbs, but we've also eaten at a couple of pretty great restaurants within a stone's throw of Sirena. With local diners accustomed to excellence, it seemed reasonable to expect that standards would be high.

The decor did its part to keep those expectations afloat. Its location off an interior "Main Street" inside a strip mall (complete with faux Victorian lampposts) rang hollow to those of us accustomed to authentic city streets, but Sirena's own space was as hip as any urban cantina, with bold, turquoise-and-coral colored walls and a wittily executed undersea theme including pendant lights made from dried blowfish.

It came as a shock, then, to discover that there was nothing authentic about our first order: margaritas, of course. Sirena's are available in a surprising panoply of fruit flavors, including blueberry. We ordered the classic lime, but its syrupy sweetness belied any contact with actual citrus fruit and masked the flavor of whatever tequila may have been involved. Cocktails aren't made in the kitchen, and food isn't prepared at the bar, but still ... it gave us pause.

The chips and salsa weren't reassuring. Actually, the chips were perfectly good, crunchy and well-salted, but the salsa had little character beyond that of puréed tomato, watery-tasting and lacking in herbal or spice notes. The side of guacamole was a better match for the chips, its citrus-laced flavor revealing that the kitchen, at least, knows how to deploy a lime, and crumbled cotija cheese sprinkled on top adding an extra bit of salty, creamy goodness. We note, however, that the list of ingredients, including poblano pepper, tomatillo, pico de gallo and watercress, led us to expect a guacamole that was chunky and complex, but most of those things served as mere garnishes parsimoniously laid on top.

Crispy pork belly didn't live up to its name. The thick cubes of succulent meat and rich fat were deep brown on top, but crispy? Not so much. But the chorizo salt on the plate added savory zing to each bite, while mango-smoked jalapeño chutney very effectively balanced sweetness, smokiness and spice. Empanadas, filled with reasonably tasty pork, were made with bland pastry, and the additional filling of roasted corn didn't add much flavor. They came with a black-bean salsa that was inexplicably sweet and a one-note, faintly bitter ancho-chili sauce.

At last, it was time for tacos. While Sirena isn't trying to compete with the new crop of excellent taquerias (and at $8-12 a pair, it shouldn't), its tacos share their crucial qualities: tasty meat, complementary and sometimes inventive condiments, and tortillas that bring something to the table in terms of texture and taste. In the jerk-chicken taco, juicy chunks of poultry, mildly spiced, took main stage, while mango chutney, pickled jalapeños, pico de gallo and crema contributed sweetness, spice and richness, respectively. The Pittsburgh taco could have been a mere stunt, but well-seasoned fries and sriracha-ranch slaw combined well with respectable strips of grilled steak. Fritos did not make the chicken-enchilada tacos especially enchilada-like, but were another fun touch that worked.

We also liked the crispy-oyster taco. The shellfish were big and wore crunchy coats of breading, but their distinctive ocean-floor flavor wasn't obscured by the other fillings: a creamy, tangy slaw, a healthy slather of beer mustard, and the cilantro and lime that kept things at least faintly Mexican.

Note that we have yet to repeat an ingredient, and that might be the most impressive thing about Sirena. It could have taken a mix-and-match approach to garnishing its 24 very distinct tacos, from traditional carne asada to fried mac-and-cheese, but instead each filling is custom-combined with salsas, sauces, slaws and other garnishes that complement it best. And while this might have been a recipe for hit-and-miss results, muddled flavors or ill-conceived combos, we didn't taste any of that in our sampling of fully one-third of the choices.

While Sirena's execution of some basic Mexican items was rocky, the siren song of its nontraditional tacos rang true.