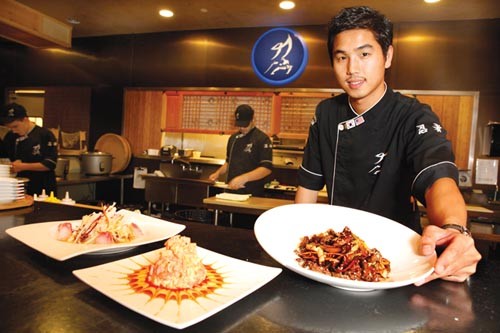 With their corporate chains and national brands, malls are all about meeting your expectations. So it was a surprise when we went to Pittsburgh Mills and were wowed by a wholly original venue for eating food from Japan.

And Korea. Like many local Japanese dining venues, Sinobi is owned and run by Koreans. Unlike some other Japanese restaurants, Sinobi gives a wide berth to grill-chopping, shaker-tossing hibachi dinner-theater. Instead, its menu focuses entirely on traditional Japanese and Korean dishes, sometimes Americanized or fusionized, but never as dumbed-down as strip steak with soy sauce.

We were further intrigued to note the philosophy underlying the enterprise, setting forth concepts like "Sincerity," "Nobility" and "Optimum" to guide the workers. Indeed, in this paradigm, "Bravery" is supposed to apply both to the restaurateurs, for bringing this food to America, and to the diners, for "leaving their inhibition" to appreciate it. These concepts extend, somewhat puzzlingly but charmingly, to become the organizing principles of the menu: Apparently, "Integrity" is embodied by the nigiri sushi.

More of Sinobi's initial charm derives from a space that has been transformed from the classical Mediterranean décor of its previous tenant, an Italian restaurant, to East Asian fantasia, with half-walls topped by blue-glazed roof tiles, a suit of armor and a straw-matted banquet room that beautifully approximates traditional Japanese enkai rooms, even as Korean art adorns the walls. The Asian conceit even extends to the menus, which are printed on fabric and rolled and tied into scrolls. It could all seem tacky, but something about it -- perhaps the Sincerity -- made it entirely enjoyable.

It also led us to a rare indulgence: ordering one of those wooden boats full of sushi. (Actually, scratch indulgence; we prefer to think of it in terms of Nobility, as it is categorized on the menu.) The smaller boat featured four varieties of sushi rolls, a couple of nigiri, and two goon ggang; the last, an unfamiliar Korean term, turned out to be a large ball of rice, rolled in seaweed and topped with a little heap of diced fish. It was more than a mouthful, and rather a challenge to handle with chopsticks. But it did give us a chance to try some morsels of tuna and salmon without other, distracting flavors. The salmon was rich, but the tuna was merely OK, somewhere between good, meaty sashimi and the washed-out, frozen flavor typical of lower-end sushi joints. The rolls were all inside-out style -- we would have preferred more variety in their preparation -- and the rice was on the wet side. But judicious use of sesame seeds and varied julienned vegetables helped out. The salmon roll was especially well balanced, with the butteriness of the fish coming through.

Once that boat had sailed, most of our other dishes were exceptional. The Sincere seaweed salad was perfect, lightly dressed and offering a fine balance among the crisper and chewier strands of bright-green kelp. Deep-fried gyoza dumplings took on a fascinating character, their edges eggroll-crisp even while their wrappers remained pillowy; the meat within was distinctly beefier than what is typical in Japanese or Chinese dumplings.

Innovation includes intriguing items like Cornsnow -- sweet corn baked with asiago cheese -- and sliced red snapper with pesto and house sauce, but we stuck with more straightforward innovations. The volcano blossom was a generous ball of diced tuna, salmon, cucumber and avocado tossed together in a spicy sauce. It was then arranged in a conical pile, and surrounded on the plate with a fiery ring of a creamier, spicy sauce. It reminded us of a spicy tuna roll re-diced -- in a good way, to its essence -- and it was addictively delicious. In particular, the two kinds of spicy sauce, neither one overwhelming, added up to more than the sum of their parts, offering distinct notes that complemented one another rather than merely ratcheting up the heat.

Koibitto was much like those now-ubiquitous lettuce wraps, but with two key distinctions: One, the meat was beef bulgogi, and two, the meat was integral to a salad of shredded cabbage and scallions, topped with an unidentified white powder (possibly the ground rice that makes Thai larb salad so irresistible?). The menu describes the meat as "kissed with Korean barbecue," and we found this completely apt: Where bulgogi can be a bit heavy, this sauce was light and slightly sweet, and the presence of lots of crunchy vegetables made for a nicely balanced dish.

Take note, mall shoppers: You need no longer submit to mass-marketed, indifferently produced food. Sinobi is a treat for the senses. We're sincere about that.