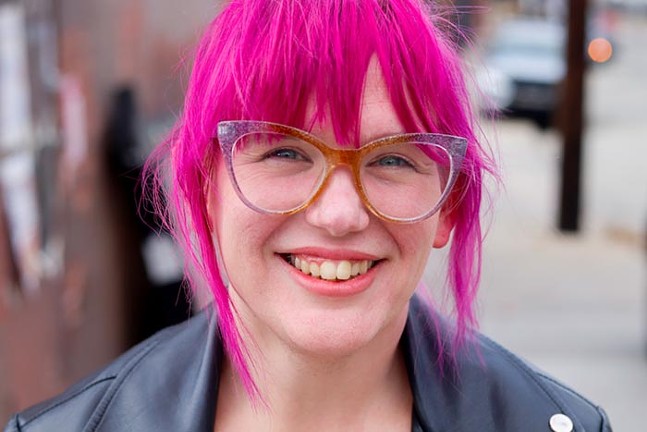 A local group will present a new stage adaptation of a 1990s thriller, only with fewer thrills and a whole lot more song and dance.

“The response was so positive, and we filled that place beyond capacity, so we decided we should do this again,” says Fear of Rosemary’s Baby: The Musical, which took place at the now-defunct Glitterbox Theater. “Basically, anyone who expressed interest, I tried to make room for.”

Single White Female: The Musical promises to be chock-full of outrageous kills and melodrama that the music helps bring to the stage. But behind the show’s absurd premise is a serious mission. Just like with Rosemary’s Baby: The Musical, proceeds from the show will go toward the Western Pennsylvania Fund For Choice, an abortion fund that helps financially support people seeking abortions. Half of the ticket proceeds and all donations will help people afford transportation and other costs that act as barriers to getting a safe abortion.

“With abortion access being severely compromised in neighboring states like West Virginia and Ohio, abortion funds like these are absolutely essential to help people get the reproductive care they need,” Fear says. “We hope to generate at least [$1,000] for the organization and support like this will go a long way in helping us reach that goal.”

Although the show has sold out, those interested are encouraged to check in with Bottlerocket the night of the performance in case of canceled or refunded tickets. Even if you can’t make the show, Fear encourages people to make a donation of $15 to Western Pennsylvania Fund For Choice.

Nowadays, people are more familiar with the term “single white female” being used to describe an obsessive or manipulative female friend or partner, but not the movie itself, Fear says.

“It’s a property that not everybody has seen but a lot of people are aware of because the term is so much in the pop cultural lexicon,” Fears says. “People have an idea of what that entails.”

In the show, the “SWF” is the deceptive Hedra Carlson (Kait Wittig), who moves in with newly single New Yorker Allison “Allie” Jones (Camille Goleb) after her split from her fiancé Sam (Mike Baltzer). Following a series of impersonations, a copycat haircut, and one particularly grisly stiletto heel murder, Allie realizes that her roommate is not who she claims.

Fear considered adapting other movies — Jurassic Park and The Stepford Wives were also on the table — but after rewatching Single White Female in 2020, she says she felt drawn to its storyline.

“It was a movie I had seen on cable TV when I was probably way too young to get it,” Fear says. “It covered a lot of the same ground as Rosemary’s Baby in that there are females at the center of the story, and a lot of it has to do with fighting against oppressive forces, especially misogynistic forces.”

Tessa Barber serves as the show’s musical director and says she came to the movie as an adult. She adds that she was excited by the prospect of fleshing out the characters through the music.

An eclectic live band made up of local musicians and friends, including Barber, Mike Baltzer, Eric Frankenberg, Canyon Cole, and Zach Nussbaum, will bring the show’s tunes to life. Expect some surprises, such as an accordion and electric ukulele, to make an appearance.

“It's gonna be something a little different from what people have seen that still has some traditional music touches,” Barber says.

One major way the stage musical differs from the movie is the addition of a Greek-style chorus, which sees three women narrate, comment, and poke fun at the scenes as the show goes on.

“They’re saying what everybody is thinking, like when you’re watching a movie with your friends and you’re like, “I can’t believe they’re doing that” or “that’s so gross,” Barber says.

Fear says she’s excited to highlight the movie for audiences who have never seen it, or haven’t seen it in a long time, especially through such a silly lens.

“It’s fun to reintroduce the idea to people,” Fears says. “It’s something that had its moment in the ‘90s, but 30 years later — how does it age, how do we adapt it, and how do we update it, like, how do we make it relevant?”