Singin' in the Rain at Pittsburgh CLO

Is a movie the highest to which a play can aspire? 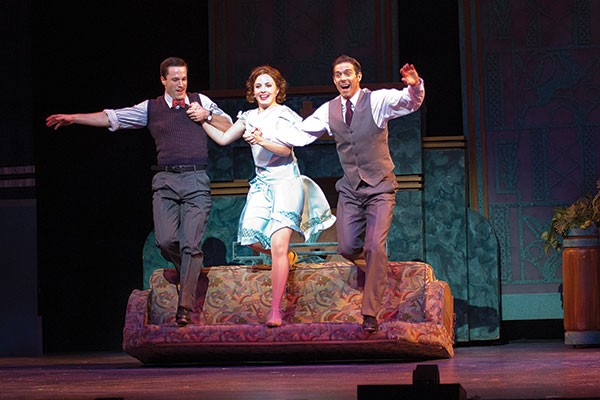 SINGIN' IN THE RAIN

"All singin', all dancin', all splashin'!" is my description of CLO's Singin' in the Rain, the stage-musical version of the MGM classic about the birth of the Hollywood talkie.

All splashin'? Yes, indeed: There's a thunderstorm happening right on stage at the Benedum. In a scene lifted from the movie, and presented as the first-act finale, the curtain rises to reveal a 1920s street. David Elder starts singing the title tune, and thousands of gallons of water began showering the stage.

Elder, the epitome of the suave performer, recreates Kelly's iconic number with help from director and choreographer Linda Goodrich. And the rain it raineth for a good 10 minutes.

And the audience went nuts! They cheered when the set came into view, they cheered when Elder started singing, and they almost stroked out when — in a reconstruction of the movie's most famous image — he jumped up onto the lamppost, with his face turned toward the deluge.

And then, at intermission, a fleet of stagehands came out and spent 15 minutes mopping up the floor. (Though the set, by Michael Anania, is designed to collect the water, physics being what it is, there was plenty still on the ground.)

Other scenes were recrafted with loving hands. Elder, Cary Tedder and a very charming Mary Michael Patterson turn in an enjoyable "Good Mornin'." And Tedder couldn't have been a bigger crowd-pleaser with "Make 'Em Laugh." In fact, Elder, Patterson and Tedder are astonishing dancers, as is Kristine Bendul. Their performances are even more impressive when you consider that they're doing in "one take" what originally took weeks to film.

It may seem that, for a theater review, I'm invoking the movie an awful lot. Believe me, it's nothing compared to what the musical itself does. This is a show with only one purpose: to recreate famous movie scenes and numbers on stage.

I'm not sure what the theatrical purpose of that is. Is a movie the highest to which a play can aspire? But I am in the decided minority. The audience loved it ... and the more like the film it was, the more they applauded. Good for them, but haven't they ever heard of Netflix?