Dar Williams explored coffeehouse folk on her first two albums, turned up the amps on 1997's End of the Summer, dialed them back on the subsequent The Green World, and tried richer, more varied arrangements with some '70s pop-rock style on her past two albums. For her latest, Promised Land, Williams was trying for something more straightforward, but still compelling.

"I'm going out as a trio for a band, so it's kind of spare, [but] with no sacrifice of impact," says Williams by phone from her upstate New York home. She chose producer Brad Wood (Liz Phair, Pete Yorn), who helped crystallize a sound she compares to the first Violent Femmes album. "It's a lot of lyrics but the voice has a lot of personality, so it's still kind of punk. This kind of, 'Why can't this have the same attitude, or even more, for it being so spare?'"

The album kicks off with the jangly, anthemic resolve of "It's Alright," in which she promises "it's time and I'm changing ... I'm my own sovereign nation, dedicated to transformation." Williams calls it her "windshield-wiper rock" song, comparing it to the Jackson Browne/Eagles classic, "Take It Easy." Though she acknowledges her husband questioned the album title's similarity to the famous Bruce Springsteen redemption song, her Promised Land is more question than reward.

"It's important to feel a love for your land, and at the same time, if you feel entitled about it, and you don't work to earn it in some ways, then the only way you express yourself is by fighting over it," she says.

That attitude is conveyed in songs like "The Easy Way," where she sings, "we don't want to be the ones to lie and cheat and slander, so we hold each other up to a higher standard," and "Buzzer," whose single mother participates in Stanley Milgram's famous electroshock experiment, turning up the voltage for the sake of her kids. Another, the gothic-folk ode, "Holly Tree," features a midwife hung as a witch for using herbs to ease a baby's delivery.

"Instead of presenting a solution, I present stories of people I know are trying to weather it," Williams says. Her characters face constant decisions about how to "not do the right thing, but how to be in the story of believing," she says. "That's why the other thing I wanted to call the album was Women Trouble, because there are so many women stories, [but] there was a resounding 'please don't do this to your label.'" 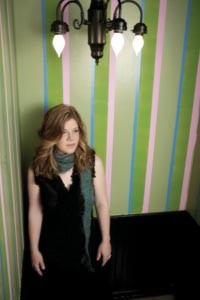 Turn up the voltage: Dar Williams