Stop me if you've heard this one before: "Don't let us hang around this town / And let what others say come true / We're just good for nothing they all figure ..." Of course -- that's the Curtis Mayfield classic, "We People Who Are Darker Than Blue."

But Sinéad O'Connor took at least one liberty when covering the song for her soon-to-be released double album, Theology: The next line is "A boyish grown up shiftless jizzer." Maybe that's some Irish slang I'm not privy to, but on the surface it seems odd that, for someone who will tear up a photo of the Pope on national TV, even the mention of a racial slur is taboo. But "jizzer"?

Mayfield isn't the only one O'Connor borrows and adapts from on the new record, her first since 2005's Sly & Robbie-produced reggae album, Throw Down Your Arms. There's also a re-write of the traditional "The Rivers of Babylon," one of several Rastaesque numbers here, and an icky Andrew Lloyd Webber song, "I Don't Know How to Love Him," (Yes, that would be from Jesus Christ Superstar.)

And the original songs, to a large degree, rip off God. The influence of gospel music has long infused the roots of rock 'n' roll with Biblical themes and language, and as no one knows better than Nick Cave, a little fire and brimstone can add gothic resonance and drama to, you know, songs about girls and cars. The sense with Theology is that O'Connor is after the gravitas and grandeur of the language as much as the content, and many songs directly adapt or quote scripture. There's "33," an adaptation of a psalm, and "If You Had a Vineyard," which mines Old Testament prophesy for lyrics like "Oh, that my eyes were a fountain of tears / That I might weep for my poor people / For every boot stamped with fierceness / For every cloak rolled in blood." Intense stuff.

The two-disc Theology began as a single, spare acoustic album, recorded in Dublin by Steve Cooney with only vocals and guitar. But during that process, she started working in London with DJ and producer Ron Tom, and another CD was born. But with some minor reshuffling, drum machines, strings, horns -- the full soft-rock sheen -- it's re-recordings of the same songs. (Of the two discs, the pristine Dublin Sessions is probably destined to age more gracefully; the London Sessions already sounds a bit dated.)

While some of this may sound critical (seriously, Andrew Lloyd Webber?), taken as a whole, Theology is a strong album, with even the mirrored versions of the songs adding to the thematic and musical consistency and weight. And that kind of a statement, for better or worse, is classic Sinéad. As is the use of "U" for "you," and, of course, that voice. Whether whisper-soft and otherworldly or that strident, warbly sound Dolores O'Riordan tried so desperately to appropriate, O'Connor's voice is as intense, idiosyncratic and evocative as it was on The Lion and the Cobra and I Do Not Want What I Haven't Got. And that's probably what people really listen to her records for.

O'Connor is in Pittsburgh for two performances on Sat., June 23. First, she's taping a sold-out performance and interview at The Warhol for the World Café public radio broadcast. Then she's playing WYEP's free outdoor concert at Allegheny Landing, on the North Side. Also taping segments and performing at the festival are moe., Kim Richey, Ike Reilly Assassination and -- in quite a coup -- Pittsburgh-based singer-songwriter Jon Check. 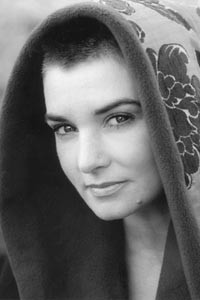