The South Side's popularity with twentysomethings first evinced itself in a near-ubiquity of bars and nightclubs. Now, this is being followed in natural succession by post-closing-time establishments with menus designed to feed the revelers before they stumble home to sleep. What was once the province of the occasional food truck is fast becoming a full-fledged restaurant niche, in which serving snacks to the late-night crowd ranks right up with providing lunch and dinner.

Perhaps no place on East Carson embodies this quite like Silvi's Mexican Restaurant, named after owner Dimitri Avila's wife, Silvia, a native of Guanajuato who learned traditional Mexican cooking in her grandmother's kitchen. By day (and evening) Silvi's offers a fairly typical menu of selected Mexican dishes and American sandwiches and other standards. But at 9 p.m. on Friday and Saturday, a switchover occurs, and the restaurant becomes a taqueria. Featuring limited meat options on house-made tortillas until 3 a.m., this is Taco Time at Silvi's, and it draws quite a crowd of devotees.

Early on a weekday evening, there was no sign of the crowd to come, with only a few other customers besides us. We scanned the menu; what it lacked in extent, it made up for in eccentricity. Alongside commonplace Mex-American fare like quesadillas and enchiladas were less familiar items such as a citrus and avocado salad, and sopes — smaller, thicker tortillas (known as gorditas) stacked with toppings like a tostada. The American side of the menu ranged from bar-and-grill standards like chili-cheese fries and burgers to reubens and other deli favorites. It's common enough to see such a wide range at a bigger restaurant, but among only five starters, three salads and fifteen entrees, it was hard to figure out what the kitchen would do best.

Considering the popularity of Taco Time, we assumed that Silvi's tacos were a must-try, but we were underwhelmed by the ones we ordered. The menu offered only steak, chicken or pork, while a sign on the wall noted specials of chorizo and tongue. The tortillas, apparently made from white corn, had great texture, hearty yet tender, but very little flavor. The meat within was overpowered by heaps of shredded lettuce, pico de gallo, guacamole, sour cream and queso fresco. The pork was shredded and, when separated from all the taco's other fillings, had pretty good flavor; it's likely that, served with just some diced onion, cilantro and a lime wedge, it would have been more of a standout. Crumbled chorizo had a bit of kick, but was simply too meager to compete with all those toppings. The tongue taco we ordered never arrived. 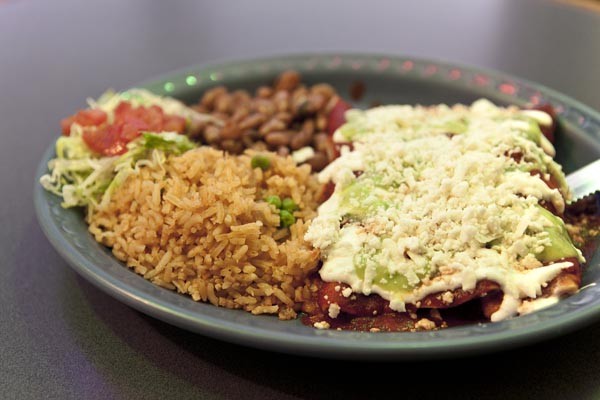 Our order of sopes only amplified these problems. The thicker gorditas were unseasoned and only slightly crisp, making them alarmingly like white bread, and the steak, minced to near invisibility, was tough and flavorless.

Silvi's "R"less burger isn't part of the Taco Time selection, but it should be: It might be the best post-bar ballast this side of a Primanti's sandwich. A decent-quality burger was topped with shredded pork, pepper-jack cheese, fried pickle slices and shredded lettuce mixed with pico de gallo. This time the meat had ample presence, and the spicy cheese overcame the slightly washed-out lettuce. Here, the pickles, which are often so cold and crispy that they distract from a burger, harmonized and added vinegary dimension to the overall flavor.

Chicken Acapulco was a full entrée plate, complete with sides of Mexican rice and beans. A pan-fried chicken breast had a tender, succulent texture, if not much flavor on its own, but sautéed peppers and onions plus slices of fresh avocado supplied a satisfying combination of hot and cool notes. A light queso sauce lent extra moisture and savor without actually blanketing the dish in creamy cheese. The beans were the surprising star of this plate, however.  Their cooking broth of greens and smoked pork still clung to them, giving them a complex depth of flavor; far from the indifferent beans on most Mexican platters, these were worth eating, every one.

Among both Mexican and American options, there are some satisfying choices at Silvi's, and we applaud the Avilas for making a conscious effort to keep them all affordable at under $10. As for tacos, we're happy that Pittsburgh is now a city with enough cheap taco options to be able to pick and choose the best. 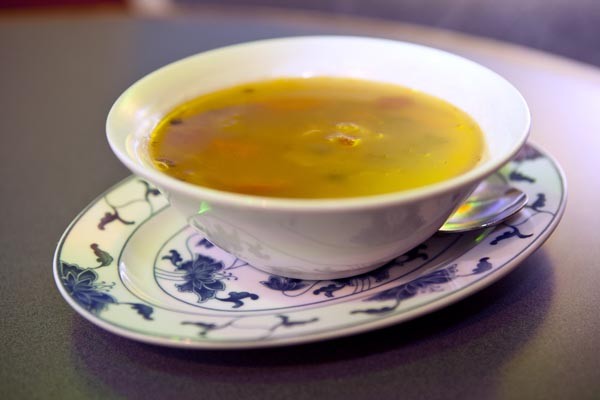