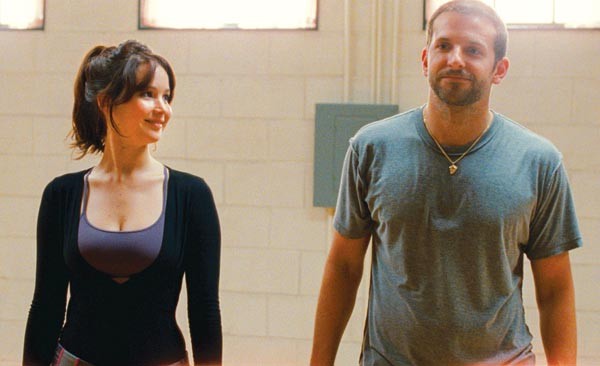 Well, first, let's get one thing out of the way. Silver Linings Playbook: worst ending ever. Now don't worry: Nobody dies. (I wish.) It just has one of those cowardly Hollywood third acts (i.e., the last half hour) that wants to sell more tickets to an otherwise challenging and difficult film.

And that's a shame, because most of the time, it's one of the most poignant and incisive dramas about mental illness I can remember. In scene after scene, director David O. Russell (Flirting With Disaster), adapting Matthew Quick's novel, creates beautifully measured mayhem before bringing each situation to a sort of livable resolve, just like the troubled mind of Patrick Solitano (Bradley Cooper), his bipolar protagonist.

Silver Linings Playbook is not a comedy, although some people in the audience when I saw it laughed at some things. I'll give them the benefit of the doubt and assume they were merely uncomfortable with the movie's swings from disquieting pathos to misbegotten farce. That, in fact, is what Patrick does: Just out of a mental hospital, where he was committed after a violent breakup with his wife, whom he seems to think will want him back, he searches frantically for something positive in every situation that confronts him. But of course, if you have to search that hard, it isn't there.

His affable father (Robert DeNiro) is obsessive-compulsive and a gambler; his beleaguered mother (Jacki Weaver) does her best to keep them both grounded. Then, Patrick meets Tiffany (Jennifer Lawrence), a young widow with mental-health issues of her own. Needless to say, they're a better cure for each other than all that silly medication and therapy.

Much of Silver Linings Playbook illustrates what mental illness looks like in everyday life, and it's unnerving to watch on screen, just as it is from across the dinner table. There's some gentle humor that works, but also a lot of terrible storytelling choices. The acting is superb, and I can't remember ever liking Cooper this much: You don't know what his character will do next, an effect he achieves with effortless concentration. DeNiro, too, has rarely been this touching. It's his best work since Taxi Driver. Together they tell the story of a struggling family that (in real life, at least) will probably never fully find peace, but that has an immutable instinct to try.