Drama about military pilots' wives can't quite take off. 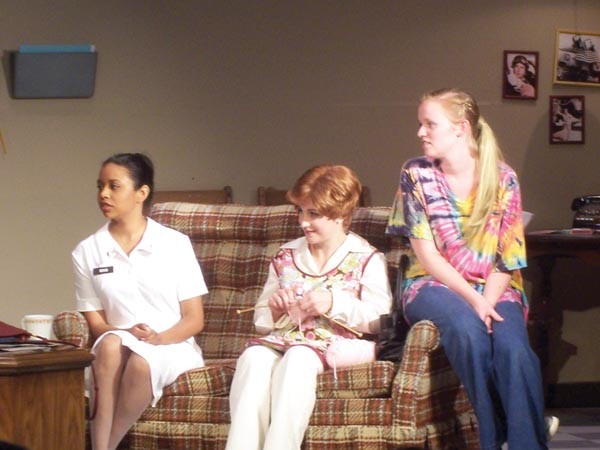 Playwriting's a son-of-a-bitch. There's so much to do: keep the story moving but let the drama breathe; stay ahead of the audience but only so far; develop characters unique and organic; write with insight and wit ... It's no wonder playwrights drink.

It's 1975 on a U.S. Marine Corps airbase. A plane has gone down and six pilots' wives sit together, waiting to learn who is now a widow. At first they're focused on the husbands and their work, and you think it's going to be a play where onstage characters talk about people and events offstage.

But Price's innate sense of theater steps in, and she creates conflict, and drama, for the audience to see. There are too many characters — two of the wives should be cut — but she's still written four fleshed-out, believably individualized women. There's a certain hermetically sealed quality to each of them; they live in a culture far removed from mainstream life. But Price manages to bring in some of the outside world: domestic violence; the African-American color line in the armed forces; and the nascent stirrings of feminism.

In the play's second half, she's designed a clever schematic, the manner in which each woman finds out whether her husband is alive. It would be a coup d'theatre if she didn't drag it out so long. As it is, because of some overwriting and clichéd plot development, the play runs aground in Act II.

Director Kate Neubert-Lechner has assembled a cast of six very hard-working women. Lynne Franks, Joyce Miller and Carla Clark have the most developed characters, and play them with plenty of strength. Meanwhile, Lauren McCaffrey, Erin McAuley and, especially, Ariel Leasure do what they can to bring their characters to life.

There may be another reason Silent Heroes doesn't land like it should: This play is fueled by an unabashedly pro-American "love it or leave it" worldview. That's certainly Price's right. (She grew up in a Marine Corps family.) But much of the drama she tries to create involves tension between five pro-military wives and one who isn't ... and Price has made this woman so naïve, hapless and helpless, it's no theatrical contest.

Her barely concealed contempt for the dissenter's opinions scuttles the second act. Price advances the idea that the students killed at Kent State were traitors and the people who killed them are patriots — certainly a viewpoint which should lead to some dramatic fireworks. But Price doesn't allow an informed rebuttal to take place.

It's also hideously clear that these women have been emotionally paralyzed by the transient, lonely lives they're forced to live. But Price isn't going to irrevocably condemn military life, so the issue bubbling under the entire play is negated.