The friendly, family-restaurant vibe and its Irish-inflected pub grub is more than good enough to accompany a night of pint hoisting 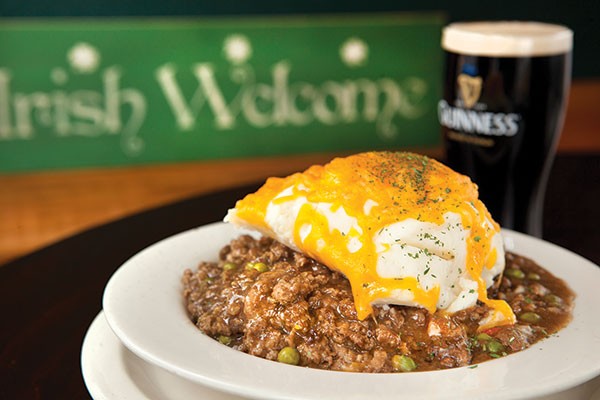 Popular images of Irish culture seem divided between familial bonds and drinking, except, of course, for when they're combined. Sieb's Pub, in the North Hills, is a family-run bar and restaurant whose sign proclaims "Love, Loyalty and Friendship," doubling down on the Irish iconography with both a shamrock and a Claddagh ring (which itself is said to represent those three virtues).

Walking in, we weren't sure at first whether our family would feel welcome: We were in a big bar area, dominated by TVs and Hiberniana, off the lobby. But a smiling server brought us through the bar to the dining room, a brightly lit space with plaid wallpaper, plaques with folksy sayings on the walls, and tables that doubled as scrapbooks of the Siebert family. The tabletop at each booth was essentially a giant shadow box, filled with memorabilia: one of sports of the North Hills (including an old Pony League baseball and some antique team photos), another displaying tchotchkes from a recent trip to the Grammys. Our table documented the musical life that preceded this, filled as it was with pictures, programs and newspaper clippings of the Bel Airs, evidently the teen band of owner Kenneth Siebert. We found these time capsules a welcome change from ubiquitous stock pictures of old Pittsburgh or the Auld Sod.

Sieb's kitchen pairs pub grub with Irish fare, a menu section that's recently been expanded. Overall, it is, as Angelique describes the German cooking of her own forebears, brown food: Green, that most Celtic of colors, was limited to the (iceberg) salads and the (overcooked, underseasoned) vegetable of the day. Authentic or not, it's certainly typical of Irish fare in America, and we set aside any high-falutin' notions of a healthy, plant-based diet to dig in.

Our first serving of potatoes arrived in the form of "Crispy Pub Chips," thick slices fried deep-brown and flavored with garlic and parmesan. These were addictively delicious — even the potato-chip resisters at our table found themselves reaching back for more — and uniformly browned and crisp, with no soggy or blackened specimens in a generously sized basket. Next up came a rather less-Irish item, fried pierogies. Again, they were uniformly toasty brown, but this resulted in the wrappers becoming tough cases rather than crispy shells for their fluffy potato-and-cheese interiors. A fine distinction, perhaps, but one that made the difference between dividing the last pierogie to share and leaving it uneaten on the plate. Too-salty butter-fried onions didn't help much.

A pleasing cross between modern trends and classically Irish flavors came in the form of corned-beef sliders. Tender, griddle-warmed beef was sandwiched between split halves of superb little rye rolls and seasoned with tangy dijonnaise. A stack of these would make a fine St. Patrick's centerpiece.

New to Sieb's menu, bangers-and-mash ought to become a popular dish. The mild sausages were split and grilled, then served atop creamy mashed potatoes amid a rich gravy that was deeply seasoned without being spicy, and that featured a consistency well balanced between thick and thin. This was a comfortable classic, well executed.

Guinness beef pot pie was much less successful, with beef that was tender but a touch dry, indifferently cut vegetables and a thin gravy that offered no hint of the rich stout supposedly forming its base. The crust on top was also generic. The best news was more potatoes — a few hunks of redskin reposed at the bottom of the bowl.

One non-Irish item was serviceable, bordering on satisfying. Sieb's burgers are half-pounders, "hand-packed." This term from the menu, unfortunately, accurately conveyed the too-dense beef that wasn't bad, but failed to impress on any level: It was neither juicy nor charred, and far from tender. We did like the bacon and Swiss topping, and applauded the unusual but wholly appropriate choice of a soft pretzel bun, as it was hearty enough to hold the substantial patty. The side of fries was a cut above bar-average, thick-cut but fluffy within and slightly crisp without.

We liked Sieb's friendly, family-restaurant vibe, and its Irish-inflected pub grub is more than good enough to accompany a night of pint-hoisting. If only hops counted as a vegetable.