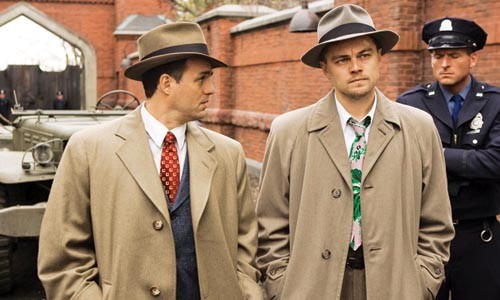 All aboard for Crazy Island! It's 1954, and on a boat off the coast of Massachusetts is a pair of federal marshals, the seasick Teddy Daniels (Leonardo DiCaprio) and his new partner (Mark Ruffalo). Their destination: Shutter Island, a home for the criminally insane, from which a murderess has gone missing.

Seems simple enough, but nobody at the facility -- the guards, the patients or the head honcho, Dr. Cawley (Ben Kingsley) -- is very helpful. And when the two Feds get trapped on the island by a hurricane, things go from odd to odder to downright alarming.

Daniels grows increasingly suspicious about what's really going on at the island, but the harder he searches, the more elusive the truth seems. It's as if he has fallen into a real-life jigsaw puzzle, the solution to which is further complicated literally and metaphorically by mazes, dead-ends, cages and psychotropic experiences.

Shutter Island, directed by Martin Scorsese and based on a novel by Dennis Lehane, is certainly entertaining -- at least up to a point: It could have been shorter than its 138 minutes. The actors, who also include Michelle William, Jackie Earle Haley and Max Von Sydow, play the material seriously. And the film displays plenty of craft: interesting camera angles, artful colors (oooh, pretty blood pooling ...) and the sort of meticulous lighting that defines perfectly illuminated murk.

But there's just too much about the film that reads of a cheesy movie made well. As with an over-decorated Christmas tree, Scorsese appends every bit of thriller bling -- doors bang open, hallways end in darkness, lightning crashes, electric lights buzz and flicker, cryptic messages are passed. (This island is set in a sea of red herrings.) Obfuscation can be expected from the island's authority figures and the weather. Fire -- both literal and allegorical (oh, that burning passion!) -- is a frequent motif. Also, a lot of things fall from the sky in this film -- tree limbs, rain, ashes, snow, Nazi paperwork -- and if they look better tumbling downward in slow motion, all the better.

Less forgivable is that every bit of drama or sudden thrill is well telegraphed, so seasoned movie-goers won't be the least bit vicariously anxious. (This film employs a lot of frantic cellists and kettle-drummers.) It all leads up to a big reveal that, even if it strikes you as a surprise, doesn't really make much sense.

Throughout the film are frequently dropped allusions to bigger topics, such as: the lingering trauma of World War II's atrocities; the urgency for post-war normal; the growing Cold War paranoia infecting the homefront; and landmark shifts in psychiatry and the treatment of mental illness.

Yet, none of these ideas gels into an instructive broader context. Scorsese stuffs Daniels' pockets with these tensions, but they just fall out willy-nilly. Is Daniels a mid-century everyman irreparably damaged by what his country once asked of him? Is his flag of righteousness just a feeble cover for innate violence? Are we all crazy and faking normal? Or all normal and faking crazy? If a crazy person is telling the truth, how can we know? What if the truth is crazy? Is my head aching for real -- or have I been slipped a mickey? All I know is: If they offer you a trip to an Island of Crazy and there are a lot of cellos sawing away, don't get on the boat.