Shut Out: PennDOT to spend $240,000 to fence off homeless camps under highways

"They have money to fence the bridges off; why not fund shelters?" 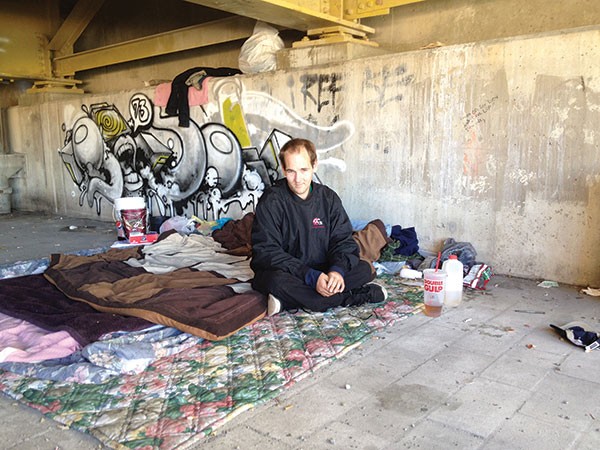 Photo by Alex Zimmerman
Tony Ferguson relocated to under Bigelow Boulevard after being evicted from a North Side encampment.

For the second time in four months, Tony Ferguson is facing eviction from his home — a spot he's found beneath a highway overpass. And in both cases, the reason has been the same: a PennDOT decision to fence off homeless camps Downtown.

"In a way, I can understand why they do that," says Ferguson, who has been homeless for five months. Still, he asks, "They have money to fence the bridges off; why not [fund] shelters?"

According to spokesman Steve Cowan, PennDOT will spend a total of $240,000 to fence off areas around bridges and highways near the Veterans Bridge, Crosstown Boulevard, Bigelow Boulevard and along ramps near Route 579, including some on the North Side. The project should be mostly complete by Oct. 16.

The eviction of seven new areas comes after PennDOT cleared camps on the North Side in July. That sweep included one of the city's most populous encampments, which was located under Route 579 near Anderson Street and drew 30 people some nights. Cowan cited public-health concerns as a reason for the evictions, saying the camps are often unsanitary and can pose structural problems, especially when people light fires.

There has been an increase in complaints about the homeless camps, Cowan says: "There are obviously some spots where encampments are visible from the roadway ... especially close to PNC Park. There's lots of garbage generated under the bridges — that's where people walk."

Homeless advocates and American Civil Liberties Union lawyers acknowledge PennDOT can evict people from its property. But they contend that the homeless pose little risk, while moving them could disrupt efforts at providing services — especially because there is little coordination between PennDOT and social-service agencies in the region.

"It's certainly within [PennDOT's] rights," says Jim Withers, the founder of Operation Safety Net, which helps provide medical care to the homeless through the Pittsburgh Mercy Health System. "But the thing is, you take their stuff and they just end up somewhere else in the same circumstances."

Ferguson hopes his and his wife's days of living outdoors are numbered. They are banking on help from Operation Safety Net, which offers six months of rental assistance to get people off the streets.

Breanna Jay, the housing-crisis coordinator for Community Human Services, says evictions affect the agency's ability to offer such services. Once people are scattered, she says, they often lose medications, IDs and other important documents, which can make enrolling in medical and housing programs more difficult.

PennDOT isn't all to blame, says Mac McMahon, director of homeless assistance programs at Community Human Services. He says social-service agencies haven't always adequately managed the camps, and they should play a role in starting conversations with local leaders to coordinate their efforts.

McMahon plans to create a quarterly meeting between social-service organizations and officials with the city, county, public works, police and PennDOT, to find ways of responding to problems like homelessness beyond "putting people in jail or moving them around like a chess board."

Cowan says he sees no reason why PennDOT wouldn't participate.

Concerns about the legality of the eviction process were the basis of an ACLU lawsuit against the city 10 years ago, and have recently drawn the attention of the federal courts.

"There were sweeps going on and we got complaints that people were losing medications, important family photographs," says Witold Walczak, legal director for the Pennsylvania ACLU. "The government can't just take the belongings of people off the streets and destroy them."

In a settlement agreement, the city said it would give seven days' notice before clearing camps. It also agreed to store personal property of value for a year.

That agreement has expired, and wouldn't have applied to PennDOT anyway. But it is based on a legal theory that has gained traction. A federal court ruled last year, for example, that the city of Los Angeles erred when it destroyed the property of homeless individuals.

For its part, PennDOT plans to leave all personal property in the camps for at least several months after the fences are installed, Cowan says. Those who want to retrieve their property from behind the fence will have to call PennDOT.

PennDOT has posted signs to that effect, but the sign at Ferguson's camp doesn't make the process clear. It reads: "Area to be cleared and fenced ... your belongings will be removed and thrown away. For items of value contact Operation Safety Net [or] PennDOT."

ACLU staff attorney Sara Rose says the language is problematic. "They're not saying your items will be stored and here's how to collect them. They're saying, ‘We'll throw them away.'"