CP Illustration: Lucy Chen
One of the things I have learned as a member of the LGBTQ community is that we love alternative ways of seeing and knowing things. Whether it's astrology, personality type quizzes, or tarot, we are often calling on new ways of understanding ourselves. So when my editor suggested I get a reading from local queer tarot reader Aurora Dawning, I jumped at the chance.

Dawning came to tarot almost a decade ago during a crossroads in her life. After renting some books on tarot and astrology to dip her toe into the “woo-woo,” she says she sat on the floor and meditated, asking the universe to send her a teacher. A few weeks later, one came, and so began her relationship with her mentor and the art of tarot.

Pittsburghers might recognize Dawning, who has a day job in tech, as the former tarot card reader at Biddle’s Escape in Regent Square. She now operates out of her home office, where curious seekers can book Dawning to read their cards over Zoom for $50-100, depending on the length of the session. (Her website says she also offers options for low-income folks.)

After logging on to the video chat for my reading, I was immediately met with Dawning’s warm and energetic presence. I’ve had my cards read before, but it was during a time when things in my life were far more dire and distressing, so I was excited to ask the cards about my new life venture: moving away from Pittsburgh in a few months. After talking with Dawning about my situation as she shuffled the cards and channeled my energy into them, we drew the first card.

The style of reading we did was the Celtic Cross, with a traditional Rider-Waite deck. According to Dawning, the first card in this spread — the Ace of Swords reversed, in my case — represents the inner realm and what I was experiencing right then in the moment of the reading around my decision to move.

Dawning told me that often reversed cards are read as opposites or even bad omens, but this is not how she interprets the cards. The Ace of Swords is seen as the beginning or inspiration for something, a catalyst for a big change in one’s life.

“Within this context, it seems like when you first get there, there might be this inspiration and understanding that does come but I think that it's going to have to be something that you either consciously work to allow and accept to surface or it's going to take a minute for it to pop up,” she says.

The next card pulled, the Ten of Cups, crosses the inner life with the outer circumstances. In conjunction with the Ace of Swords, Dawning says this card can be read as the inner questioning of circumstances coupled with the outer reality of everything coming together. She explains that this card is often read as the “Happy Family Card,” which was a good sign for me because I am moving to be closer to family.

On her website, Dawning says her intention as a tarot reader is to “empower the seeker,” explaining that “tarot triggers emotions, which serve as a personal system of guidance: your feelings from the reading allow you to give yourself the best advice available in the moment.”

When Dawning pulls my next card, the reversed Page of Wands, she says is supposed to represent the grounding force, something that will stabilize me and give me structure as I move forward with this life change. Dawning describes it as the “toddler” card.

“The kid that's, like, really excited and might not do it right,” she says, “but it's going to try and doesn't mind failing because of the wonder and the engagement with that energy.”

Because the card is reversed, Dawning says there might be a struggle to grab on to that child-like energy and feel the wonder associated with it; not that feeling that emotion is unreachable, but that it might take some work.

Over the course of the reading, 11 cards were pulled. After the reversed Page of Wands, I got a few more reversed cards, and what I appreciated about Dawning’s reading is that she did not interpret these cards in a negative light. Instead, she made sure that I understood they could represent a struggle but ultimately aren’t something to fear or dread.

On her website, Dawning clarifies that she’s not a doctor or therapist and that a reading “should not be utilized in lieu of medical or therapeutic advice.” But former clients praise her readings in her reviews, including one who wrote, “So glad to have a Tarot reader who has a queer perspective.”

Two cards that were pulled toward the end of my reading were the reversed The Sun card and the Justice card. These were pulled after I got the reversed Queen of Cups, which represents my self-perception after moving, and was an overall positive interpretation of the card.

“The Queen is the one that is most intimately connected with their power,” says Dawning. 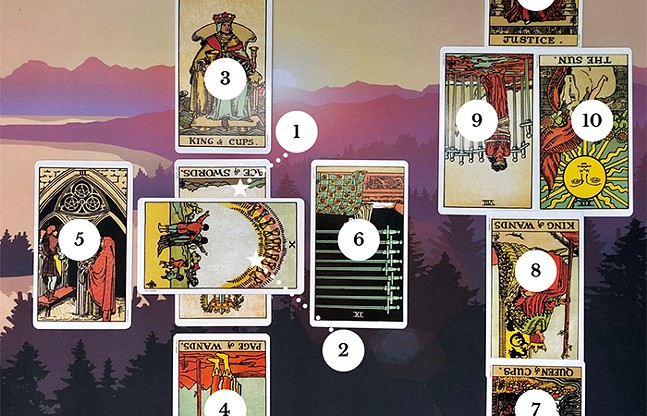 The spread of the cards during the reading
She adds that the reversed The Sun card represented the advice that I should take moving forward with the move, and that, overall, the card represents a childlike joy, so it was wonderful to see it pop up in my reading. The advice given by the card was to hold on to that joy when things get rocky.

The last card pulled was Justice, which meant a lot to me for personal reasons. I left the reading feeling even more empowered in my decision to move, and it affirmed things I already knew about myself and made me hopeful for the things to come.

Dawning says that tarot is a huge part of the person she is today. “It really helped me to unpack a lot of trauma and baggage I used to deal with, but it also helped me reclaim my power,” she says, adding that she believes that tarot has the capability to do this for anyone who engages with it. Aurora Dawning. auroradawning.com