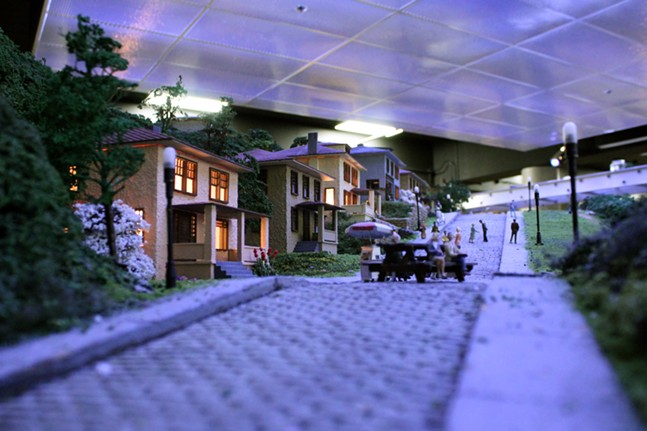 You probably know me as “the funniest guy in my office.” What you may not know is I am also Pittsburgh City Paper’s preeminent model railroad enthusiast. If I had a beat, it would be the Carnegie Science Center’s Miniature Railroad and Village,® having covered the past two yearly additions to the 100-year-old model: Donora’s Cement City and Kaufmann’s Clock. So you could imagine how details of the model’s 100th anniversary fundraising campaign almost derailed me.

CP Photo: Josh Oswald
The Grand Depot was opened by Kaufmann brothers Jacob and Isaac on Smithfield St. in 1885.

Carnegie Science Center is offering a tiered reward system for those who donate to the upkeep and modernization of the railroad, which includes motion-activated digital text panels and a digitized publication of the 100-year-old archive that features photos and letters from creator Charles Bowdish. The donation tiers are set at $10 to $2,500 (I’d assume you could donate more). Pretty standard. What is not standard is that at the $1,000 and $2,500 levels, donors will get one custom miniature figure, painted in your or a loved one’s likeness, that will be placed in the railroad for 10 years!


What?!? I’ve never been so convinced I can pull off a Madoff-esque Ponzi scheme or lobby one of you selfless, dedicated readers to set up a GoFundMe for me to get myself immortalized in one of Western Pennsylvania’s finest treasures. The clothing and positioning of miniature me would, of course, be decided by you. Dress me up like a member of Los Del Rios and have me dance the Macarena. Donate $2,500 and get two versions of me, each wearing an “I’m with stupid” T-shirt that points at the other figurine. The possibilities are endless.