Should the Abrams House in Squirrel Hill be preserved or demolished? | Features | Pittsburgh | Pittsburgh City Paper 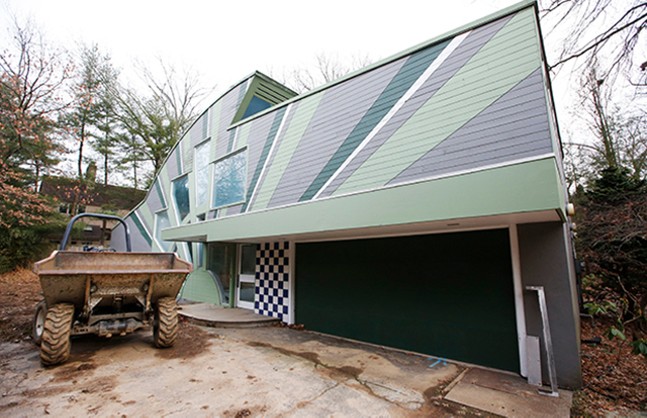 The Abrams House, the eccentric postmodern residence of 1982 by architects Robert Venturi and Denise Scott Brown, is either a costly and dilapidated eyesore or a masterpiece of design, depending on whom you ask. The building is tucked away off a private driveway on Woodland Road through Chatham University, but it is gaining notable visibility as a preservation controversy.

The grey house with multi-hued radiating green stripes features an arched roofline that breaks midway through its curve and returns to a flat profile, creating an angled clerestory window that lights a dramatic twenty-foot high living space. Rectilinear windows jockey for position among arches and curves. It’s a brainy rumination on sun, landscape, and the adjacent bridge. Venturi and Scott Brown’s work is always provocative, but the old joke is that their most interesting buildings are the ugliest.

Yet, there should objectively be no doubt that it is worthy of preservation. The architects, as pioneers of postmodern architecture, were enormously influential for their writings and buildings. Anything of theirs meets at least one criterion for historical significance. Period. The Abrams House is also regarded as the first example of postmodern architecture in Pittsburgh, checking the box on a second category. “It meets several criteria that the city identifies,” remarks Pittsburgh’s Historic Review Commission (HRC) member Matthew Falcone, who is also president of Preservation Pittsburgh. 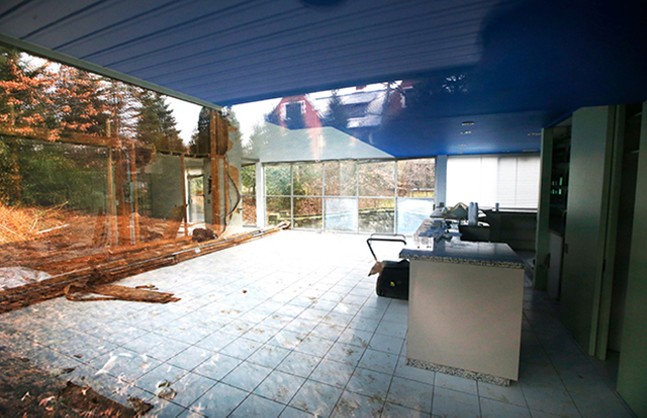 Yet the new owners of the house began to destroy its interior on July 23, only three days after they purchased it from the estate of original owner Betty Abrams. Right away, Pittsburgh History & Landmarks Foundation (PHLF) submitted a nomination to the HRC, which necessitated a halt to the demolition while the preservation debate makes its way to a vote in City Council.

Not long ago, the house’s fate seemed secure. At one point, Betty Abrams agreed to give the house to PHLF. Under a proposed agreement, PHLF would put an easement on the house, guaranteeing its preservation, and then sell it, with a commitment to provide an annuity to Abrams’ two daughters, according to Don Kortlandt, General Counsel of PHLF.

He notes that the deal fell apart over a low appraisal that couldn’t generate the needed revenue for the annuities. The Abrams daughters elected simply to sell the house, “which was their right,” Kortlandt allows. The mere availability of a Venturi House for sale was news in the architecture world, as were reports of subsequent damage, as detailed in New York-based Architects’ Newspaper.

Buyers William and Patricia Snyder are also owners of the adjacent house, the Giovannitti Residence, a modernist masterpiece by acclaimed architect Richard Meier, which they are restoring at considerable expense. The choice to preserve one house and demolish the other has befuddled observers.

The Snyders, who have refrained from speaking directly to the press, have commented through advisors and lawyers’ public hearings. The Abrams House is in a terrible state of repair, with mold, broken windows, rotting wood, and other damage, their attorney Stanley Levine said before the HRC in November. Contractor Joel Senchur, also speaking for the Snyders before the HRC, said it would cost more to repair the house than to rebuild it.

PHLF has discussed a plan to disassemble the house and rebuild it on a different site. Polymath Park in Acme, Pa., is the home of Frank Lloyd Wright’s Duncan House, a prefabricated building which was moved from its original site in Lyle, Ill. That plan faces significant technical challenges, as well as a shortage of what Kortland describes as around $200,000 just for disassembly and storage. 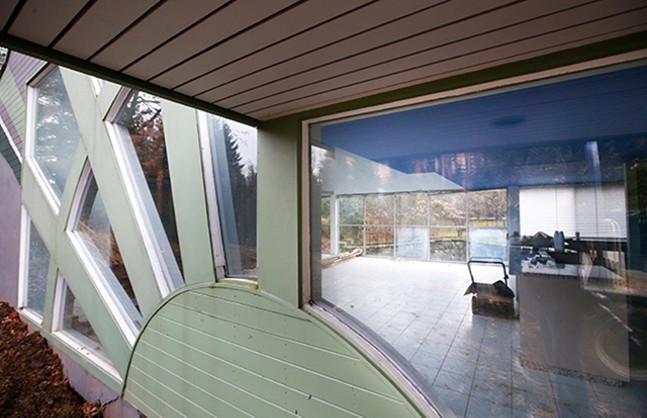 The Abrams House was always a challenge. Its site, over a pond, is undersized and precarious, contributing to the water damage that now plagues the structure. And the build quality was never good. Its architects were renowned for intellectually-charged design rather than sturdy construction. Yet the Giovannitti residence has its own ongoing history of unusually expensive construction failures and maintenance costs.

The final fate of the Abrams House will depend on a City Council vote, which will come after a public hearing. Though neither has yet been scheduled, a city administrator commented that these should take place in February and March. Kortlandt points out that because the owners are against preservation, a Council vote to secure historic designation will require a super-majority of six out of nine votes.

Debates over how it might be preserved will be contentious; but if the house is lost, regret will be widespread.