Should “micro transit” have to play by the same rules as PAT?

“They are filling a need where we do not have service.”

While many locals haven’t heard of them, these tiny transportation groups provide a crucial service. And some see them as the future of public transit in outlying suburban areas.

“If they are being seen as public transit, then they need to act like public transit,” says Molly Nichols of Pittsburghers for Public Transportation, a transit advocacy group. 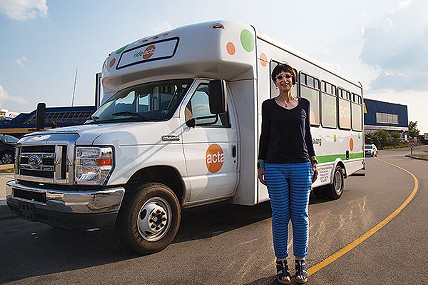 Nyesha Neal lives in Duquesne and works at Firehouse Subs, in Robinson. She commutes more than 90 minutes each way on two PAT buses, the second of which drops her off about a mile from work. Without the Ride ACTA shuttle, she would have to walk over the 376 overpass and up two hills, all with no sidewalks to separate her from the cars that speed between shops in Robinson Town Centre.

“There are a lot of jobs out here that are really hiring, but I wouldn’t travel all the way out here without the shuttle,” says Neal.

Ride ACTA and Heritage were both created in the early 2000s as nonprofit social-service organizations, in part to transport workers and fill gaps left by canceled Port Authority routes. Ride ACTA, the transit arm of the Airport Corridor Transportation Association, serves the pedestrian-unfriendly airport-corridor area of Robinson, Findlay and Moon. It picks up riders at the IKEA Port Authority stop, then the driver plans the trip based on the destinations requested by riders (most of whom get dropped off at one of two large call centers, Fed Ex or Wal-Mart. Heritage (part of Heritage Community Initiatives) serves the Mon Valley on fixed routes, with many stops connecting to PAT buses. Both services contract out to local transportation companies that provide the drivers and shuttles.

Lynn Manion, director of ACTA, says that more than 70 percent of the nonprofit’s ridership is lower-income riders, and that 96 percent of all Ride ACTA riders use the service to get to work.

“Just because these jobs are in a middle-income area, does not mean the workers are middle-income,” says Manion.

Heritage CEO Paula McWilliams says that more than 60 percent of her service’s riders have an annual household income of less than $10,000. About 97 percent of Heritage riders would not have means to get to work without the service, according to its website.

Originally, Ride ACTA and Heritage (formerly Work Link) were funded through the federal Job Access Reverse Commute program, which provided transportation to low-income workers. After that funding was cut, in 2013, the state began providing funding through transportation bill Act 89, the same bill that boosted PAT funds.

As required by Act 89, the micro-transit agencies began to act more like public-transportation entities and less like special, federal-funded programs. The state provides about 85 percent of the funding for both Ride ACTA and Heritage’s transportation services; the rest must be secured through a 15 percent local match. (PAT also receives more than half of its operating funds from the state.) All agencies funded under Act 89 must also charge fares; both Heritage and Ride ACTA are instituting a 25-cent fare come October. Until now, fares have been free.

Photo courtesy of www.rideacta.org
All riders take shuttle from the IKEA Port Authority stop (green bubble). The driver then takes them to their places of work (red dots), which include Wal-Mart, Fed Ex and the Robinson Mall.

But Pittsburghers for Public Transportation’s Nichols questions why substantial differences remain between PAT and micro-transit services. While she acknowledges that Ride ACTA and Heritage provide an important service, she feels that ultimately, that service should be provided by public-transit agencies.

“All transit workers deserve living wages and benefits and an adequate voice over their workplace,” says Nichols. “If many local transit providers can start to form around the region and receive public funding, that seems much less efficient than having a centralized agency run the service.”

Ride ACTA drivers work for Pittsburgh Transportation Group and belong to Amalgamated Transit Union Local 1743. Diane Stambaugh, Local 1743 rep, says that Ride ACTA drivers make a bit less than $14 an hour and receive some holidays off and a contribution to their medical care, but no paid sick days. She says she has not fielded grievances from Ride ACTA drivers, but adds that they “are not paid enough for the work they do.”

“I think Port Authority has the only drivers that are fairly compensated,” says Stambaugh. (PAT drivers belong to ATU 85.)

Heritage drivers work for the transportation arm of P.R.N Health Service, according to McWilliams. She says she is not sure how much its drivers are paid. But Mike Harms, a transit-union organizer in Pittsburgh, says that drivers for companies like P.R.N typically make around $10 an hour.

McWilliams says that while Heritage’s drivers are not employees of the nonprofit, they are “fully committed to what we do at Heritage.”

PAT drivers start out at $15 an hour, but after five years make up to $28 an hour, says PAT spokesman Jim Ritchie. Drivers also receive full benefits and pensions.

Additionally, because Ride ACTA and Heritage are private nonprofits, they are not required to hold public meetings, nor do they.

According to PennDOT press secretary Rich Fitzpatrick, the state does suggest that micro-transit agencies “communicate with their riders about fares and changes to fares.”

McWilliams says she reached out to riders and received mostly positive feedback about Heritage’s new fare. But when City Paper rode the Ride ACTA shuttle on Sept. 10, no rider out of a dozen informally surveyed was aware that a new fare would be instituted on Oct. 15.


While such issues have some critics crying foul, others see these two micro-transit agencies as public-transportation allies.

“They are filling a need where we do not have service,” says PAT spokesman Ritchie. “We think that those [micro-transit] systems make it possible for people to ride our systems who would otherwise not have a way to ride our system.” 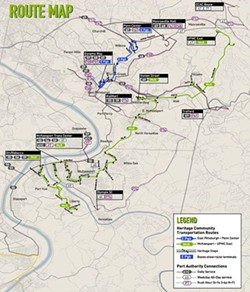 Another issue is budget. Ride ACTA and Heritage receive a combined $1.7 million from the state and county; that largely pays for services including the three fixed routes Heritage will have starting in October. At PAT, that $1.7 million “might get one small route, one with limited operating times,” says Ritchie.

Sandvig says that another major obstacle to Port Authority running services like a micro transit is how these suburbs are laid out. He says that large buses can’t navigate some of the small suburban streets of the Mon Valley, and have an even harder time driving between the retail shops and other businesses in the airport corridor.

“A private developer built [the Robinson retail site] without transit in mind,” says Sandvig, “but businesses realized they could not get workers to the jobs.”

Could micro-transit nonprofits be the future of suburban public transit in Allegheny County?

It appears that county officials might be starting to think so. County spokesperson Amie Downs issued this statement to CP: “These micro transit entities have thus far enhanced overall public transportation accessibility in their respective areas. Accordingly, we would consider providing matching funds to other micro transit units on a case by case basis.”

However, that future is potentially rocky, says Sandvig. “If ACTA and Heritage could get out of the transit, they would. It is expensive and difficult.” (While ACTA focuses on transportation, Heritage also provides services like day care and a holiday food bank.)

While Heritage receives its entire local funding match from the county, Ride ACTA also seeks funding from other sources. This year, it raised around $30,000 in donations from two of its largest-served businesses, Ibex call center and Fed Ex, and from the governments of two of the townships in its service area, Moon and Findlay.

Sandvig cautions, however, that such funding could easily dry up.

Manion says this fear of losing funding is part of the job. “We have to approach the county and townships and businesses every year; of course it is scary.”

But McWilliams believes this is the sort of drive micro-transit agencies need to stay afloat. Just like PAT, both Heritage and Ride ACTA must submit ridership reports to the state that meet certain metrics to continue to receive funding.

“If we don’t run our nonprofit like a business, and if it is not worth the investment, then we should question its use,” says McWilliams. “It is my responsibility. If I don’t do that then I will be letting thousands of families down.”