For political progressives, Jim Hightower is a "what he said" guy: someone who puts the cause in terms (almost) anyone can rally behind. The Austin, Texas-based Hightower is a former Texas agriculture commissioner who's spent two decades as a nationally syndicated radio commentator, author (Swim Against The Current: Even a Dead Fish Can Go With the Flow) and tireless advocate for regular folk. In this era of bailouts and unemployment, and this season of the Tea Party, his horse sense is more welcome than ever. "Progressives are as mad about what's going on as are the Tea Party folks. But we've been separated by about 180 degrees of bullshit," says Hightower by phone. "The fight in American politics is not over ideology -- conservative versus liberal -- but over money and power." Or, as he argues in his widely read monthly newsletter, The Hightower Lowdown, it's not right and left that matters, but top and bottom: "The populists are fighting the corporatists and are seeking structural changes that democratize control of our nation's money and power." Tea Party types, he says, are unwitting fronts for that movement's corporatist backers, like the billionarie Koch brothers. Meanwhile, Obama's Democratic Party has failed to put things like health-care reform in terms people can understand. Worse, he says, Obama hasn't been bold enough. (Hightower favors "Medicare for all"; fundamental financial reforms guaranteeing that nobody's "too big to fail"; and "Rooseveltian" programs to create jobs directly, rather than tax breaks that mostly just enrich corporate middlemen.) Hightower's free Oct. 20 talk at Point Park University is titled The Meaning of Populism (True and False). "The issue," he says, "is not big government, it is good government." Bill O'Driscoll 6 p.m. (7 p.m. reception and signing). GRW Theater, University Center, Wood St., Downtown. Free. 412-392-3938 or www.pointpark.edu/ces

Sebastian Maniscalco is at heart a man's man who is genuinely confused by the flip-flop-wearing, apple-martini-sipping "Trevors" of the world. He might look like a Jersey Shore kind of guy, but his playful character (think Joey from Friends) endears him to his audience. Maniscalco has appeared on Leno as a comedic style correspondent, had his own Comedy Central special, and done Vince Vaughn's Wild West Comedy Show. He brings his manly act to the Pittsburgh Improv for six shows starting tonight. Weenta Girmay 8 p.m. Continues through Sun., Oct. 17. 166 E. Bridge St., Homestead. $16-18. www.improv.com

Pittsburgh Playwrights Theatre Co. opens its eighth season with the return of the Theatre Festival in Black & White. This unique venture (on hiatus last year) matches white playwrights with black directors, and vice versa, in two programs of four one-act plays each. Notable in Program A is "The Janitor," an early August Wilson one-act, directed by Randy Kovitz. Program B features playwrights including Andrew Ade and Wali Jamal. Bill O'Driscoll Program A: 8 p.m. Program B: 8 p.m. Fri., Oct. 15. Both programs continue through Sat., Oct. 30. 542 Penn Ave., Downtown. $13.50. 412-394-3353 or www.pghplaywrights.com

Folk-music society Calliope has a long and varied influence on Pittsburgh's musical culture -- an influence you've probably experienced whether you attend Calliope's concerts, learn from its educational programs, or hit up the plentiful (and usually free) jam nights and other community events. Tonight's the society's annual fundraiser, an evening of barbecue and blues with Mike Dowling, an acoustic guitarist who draws on blues, swing, ragtime and more. The event takes place at the Pittsburgh Center for the Arts. Aaron Jentzen 6 p.m. 6300 Fifth Ave., Shadyside. $75. 412-361-1915 or www.calliopehouse.org

Add racism to the list of Cuban controversy. When the first half of Queloids: Race and Racism in Cuban Contemporary Art debuted in Havana this past April, it was the first time the word "racism" had appeared at an art show in the city post-revolution. Subsequently, The Mattress Factory gathered the 13 artists whose work is represented in the exhibition's second half. Thankfully, all 11 who are living can attend in person: A 2004 attempt to bring Cuban artists to the museum was barred by Bush administration policies. Tonight is the show's opening reception. WG 6 p.m. Show continues through Feb. 27. 500 Sampsonia Way, North Side. $10. 412-231-3169 or www.mattress.org

M.K. Asante grew up partly in Philadelphia, studied at the University of London, and became a poet, author and award-winning filmmaker. At 27, the Morgan State University professor is something of a spokesman for his generation, busy on U.S. airwaves and with speaking engagements worldwide. His 2008 book It's Bigger Than Hip-Hop mixes politics, history and personal narrative; his film Black Candle explores Kwanzaa. Tonight, Asante visits the August Wilson Center for Duquesne University's Black Aesthetic as Politics Conference. BO 6:30 p.m. 980 Liberty Ave., Downtown. Free. 412-258-2700

Today, in 50 cities in 16 countries, lovers of home movies will gather to share their little strips of history. No less than Martin Scorsese, Ken Burns and John Waters are among the advocates for Home Movie Day, an annual chance to watch -- and learn how to preserve -- yours and other people's home movies on 8 mm, Super 8 or 16 mm film. (No video, please.) Pittsburgh's open-house-style Home Movie Day is hosted by the now-venerable Orgone Archive at the Sen. John Heinz History Center. BO 4-10 p.m. 1212 Smallman St., Strip District. Free. 412-454-6367 or www.homemovieday.com

Now in its 20th year making music, Maryland's Clutch has long toed the line between cult popularity and the mainstream. The rock-metal-stoner-funk hybrid is touring in support of its latest, last year's Strange Cousins From the West, but loyalists can expect tunes stretching back to its first few albums, from the early to mid-'90s. The band's recently released live album features a recreation of its second, self-titled record in its entirety. Tonight, Clutch plays the Trib Total Media Amphitheatre on a tour that also features Zakk Wylde's Black Label Society, Children of Bodom and 2 Cents. Andy Mulkerin 6 p.m. Station Square. $35-40. All ages. 412-642-1100 or tribtotalmediaamp.com

Hans Tammen plays what he calls "endangered guitar," but his setup isn't what you'd expect. It's a guitar, yes, but also computer and a set of electronics that process and react to what he plays on the fretboard. It's not a completely determined process; the computer has its role, just as the human player does. The German improv artist recently released Oxide, an album he recorded with violinist Christoph Irmer. The duo performs tonight in a show set up by frequent CP contributor Manny Theiner at Garfield Artworks, along with a local guy who knows a thing or two about manipulating electronics, Michael Johnsen. AM 8 p.m. 4931 Penn Ave., Garfield. $7. All ages. 412-361-2262 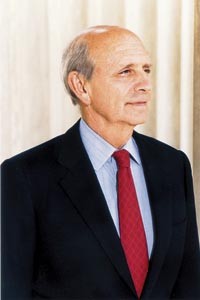 It's unusual to find a sitting Supreme Court justice talking jurisprudence out in public, but Stephen Breyer is doing just that. His new book, Making our Democracy Work: Through the Eyes of a Judge, is his second arguing against adherents of "original intent" in favor of a more pragmatic approach to interpreting the Constitution. The book is "perhaps the most honest discussion of what a judge should do that you will ever find," says the Washington Post. Breyer visits as a part of the Drue Heinz Lecture Series. WG 7:30 p.m., Carnegie Music Hall, 4400 Forbes Ave., Oakland. $10-25. 412-622-8866 or pittsburghlectures.org

Women's liberation might seem like just a history lesson for women in developed countries, but Phil Borges' photography depicts women who aren't so fortunate. Borges travels the world taking striking photos of indigenous cultures. His "Women Empowered" series depicts women in the developing world who overcame gender discrimination to become leaders in their communities. Tonight at Manchester Craftsman Guild Youth and Arts is the opening reception and artist lecture. WG 6 p.m. 1815 Metropolitan St., North Side. Free. 412-322-1773 or www.mcgyouthandarts.org