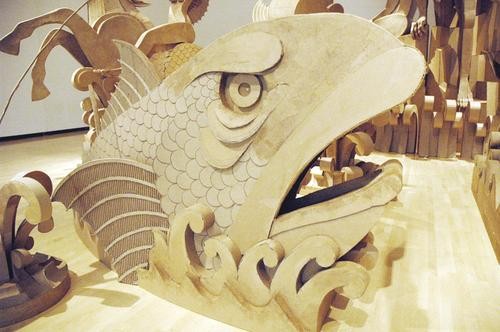 The Dollar Bank Three Rivers Arts Festival is June 3-12, it's free, and you know where to find it: Downtown, mostly within a few blocks of Point State Park. The park houses the main music stage, with acts from the Blind Boys of Alabama (June 3) to the Tom Tom Club (June 4) -- and even, after a 34-year absence, Pittsburgh Symphony Orchestra (June 5). June 3-5, there's also the affiliated JazzLive International festival, at a couple dozen Downtown venues and outdoor stages. Alongside the arts fest's crafts and food vendors, new wrinkles include cash prizes for honorees among the more than 50 artists in the Juried Visual Art Exhibition (at 805-07 Liberty Ave.); an "Art on Film" series at the Harris Theater; and chances to watch artists at work (including the "sudden art performance" 180mins) and even to make art yourself. Other highlights courtesy of the Pittsburgh Cultural Trust include celebrated Connecticut-based artist James Grashow's "Corrugated Fountain" (detail above), an homage to Rome's famed Trevi Fountain -- complete with Neptune -- that's made entirely from cardboard (709 Penn Gallery). Moreover, says festival coordinator Marguerite Jarrett Marks, festival greening initiatives continue, now including free bike-valet parking and expanded commitment both to avoiding waste (with water stations for your refillable drink container) and to recycling or composting the rest. Bill O'Driscoll Festival opens at noon daily, June 3-12. Downtown. www.3riversartsfest.org

Pittsburgh Pride, the Delta Foundation's annual festival of LGBT events, kicks off with an advocacy rally at 6 p.m. today on the steps of the City-County Building, Downtown. Other highlights in the 10-day fest include Sunday's interfaith worship service at Community House Church, on the North Side; multiple performances by Renaissance City Choir; workshops like "Legal and Financial Planning for Gay Couples," on Tue., June 7, at WQED Studios, in Oakland; and a June 9 TransPride celebration at Cattivo, in Lawrenceville. It all leads up to June 11's Pride in the Streets festival, headlined by Patti LaBelle, and the June 12 Pride Awareness March and Pridefest. Lauren Daley Full schedule at www.pittsburghpride.org

It's hard times for school funding in California, says Paula Poundstone: "In order to have a science teacher in our elementary school this year, each student has been asked to bring in a body part. And they're gonna assemble it, and he, she or it will be the science teacher." Poundstone, the sartorially eccentric comedy vet whose ability to improvise makes her a favorite on radio's Wait Wait ... Don't Tell Me, brings her popular standup act to Carnegie Music Hall in Munhall, tonight. BO 7:30 p.m. 510 E. 10th Ave., Munhall. $29.50-39. 412-368-5225 or www.LibraryMusicHall.com

The bassoon is often a forgotten member of an orchestra, but tonight it will be front and center. In this season's penultimate performance program, Pittsburgh Symphony Orchestra principal bassoon Nancy Goeres premieres a work commissioned for her by the PSO and written by the former head of Carnegie Mellon University's School of Music, Alan Fletcher. There's also work by Wagner, Bartók and Ravel. Next week, conductor Manfred Honeck leads the orchestra through its finale of Braunfels, Brahms and Beethoven with unparalleled guest pianist Emanuel Ax. BS 8 p.m. Also 8 p.m. Sat., June 4. Heinz Hall, 600 Penn Ave., Downtown. $20-93. 412-392-4900 or www.pittsburghsymphony.org

Tom Rocco has come full circle. After premiering his cabaret show My Big Fat Proposition 8 Wedding at the Cabaret at Theater Square last year, the area native (now based in New York) returns home to perform the show again today and celebrate its release on CD. Called "blissfully brilliant" by NiteLifeExchange.com, Rocco and his band lead his audience through song and story along his unique path to the grail of marital happiness, reaffirming the fact that no matter the partner you choose, marriage is still marriage, and marriage can be hilarious. BS 5:30 p.m. 655 Penn Ave., Downtown. $18 ($10 students). www.pgharts.org

"People wonder where I get my eccentric characters," says author Craig Johnson, "but if they lived in Wyoming they wouldn't ask me that question." Johnson created a detective-novel series starring Sheriff Walt Longmire, and visits Mystery Lovers Bookshop tonight to promote book No. 7, Hell Is Empty, in which Longmire tracks a sociopath through the icy landscape of the Bighorn Mountains, relying only on Indian mysticism and hard-boiled resolve. Catch Johnson in time for the TV series Longmire, currently in the works for A&E. BS 7 p.m. 514 Allegheny River Boulevard, Oakmont.Free  www.mysterylovers.com