The Pittsburgh CLO's summer gets in full swing. Tonight's the world premiere of 'S Wonderful: The New Gershwin Musical. The revue, tailor-made for fans of the Great American Songbook, comprises five "mini-musicals" showcasing local talents interpreting George and Ira, from "Shall We Dance" to "Rhapsody in Blue," in a summer-long run. Then, on Tue., June 22, the CLO presents the Pittsburgh premiere of 2007 Broadway hit Curtains. This "musical comedy whodunnit" by Kander & Ebb (of Cabaret and Chicago fame) stars Malcolm Gets and Sally Struthers in eight shows at the Benedum. Bill O'Driscoll 'S Wonderful: 7:30 p.m. Continues through Sept. 5 (CLO Cabaret, 655 Penn Ave., Downtown; $34.50-44.50). Curtains: Tue., June 22-27 (719 Liberty Ave., Downtown; $26.50-70.50). 412-456-6666 or www.pgharts.org 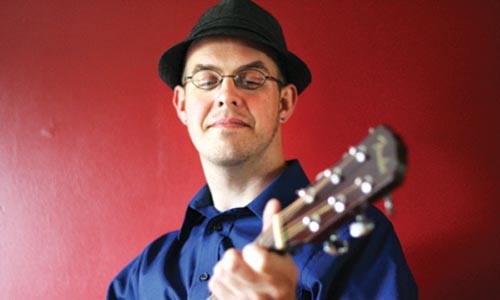 The term "alt-country" might be pigeonholing Seán O'Donnell a bit too much: The Hempfield native, bagpiper-for-hire and songwriter presents a lineup of sweet pop-inflected tunes ranging from folk to psych-rock on his debut album, Emotional Apocrypha of the Bubblegum Gospel. He describes it as lo-fi, but he does a lot with a little, filling out the tracks with vocal harmonies. He releases the album officially tonight at Club Café with help from Chet Vincent & the Big Bend, The Anti-Job and Larkin Mayberry IV. Andy Mulkerin 7:30 p.m. 56-58 S. 12th St., South Side. $7. 412-431-4950 or www.clubcafelive.com

Robert Schimmel says he's heard that cats are so smart you can teach them to use the toilet. "Yeah," predicts Schimmel. "Great when you have to go and the cat's in there." The comic is nationally known for self-deprecating wit and an act partly built around having survived cancer. (His DVDs include Life Since Then.) Schimmel visits The Improv for six shows starting tonight. BO 8 p.m. Continues through Sun., June 20. The Waterfront, West Homestead. $20. 412-462-5233

Mates of State return to Pittsburgh this week, stopping by Mr. Small's Theatre. The indie electro-pop duo will be playing songs off its new album, Crushes, which seems like a silly name for a husband and wife band who have been married for 9 years. Todd Barry and rising SXSW stars Free Energy will open. Fun will be a must, dancing guaranteed. Kelsey Shea 8 p.m. (doors at 7 p.m.). 400 Lincoln Ave., Millvale. $15. All ages. 412-821-4447 or mrsmalls.com

One medium inspires another in two weekends of performance at Space Gallery. Choreographer Mary Miller and her long-running Mary Miller Dance Company use the story quilts of Pittsburgh-based, nationally exhibited fiber artist Tina William Brewer as the starting point for a show called I look at you and I see myself. The modern-dance work is set to music by composer Charles Hall. Brewer's work often explores African themes; it should be interesting to see how that plays alongside the gallery's current Congo/Women photo exhibit, documenting conflict on the continent. BO 8:30 p.m. seating. Also Sat., June 19, and June 25 and 26. Space Gallery, 812 Liberty Ave., Downtown. $15. www.marymillerdanceco.org

Life has existed on Earth for more than 3 billion years, starting with single-celled bacteria and making its way to such late-comers as vertebrates. Evolution continues, but in Life: A Journey Through Time, nature photographer Frans Lanting sums up that history till now in a succinct 64 images. During a six-year journey around the planet, Lanting photographed minute and monumental moments, from museum collections to Russia's Valley of Geysers. The Carnegie Museum of Natural History exhibit, which opens today, includes scientific commentary on life's origins taken from Lanting's photographic book of the same name. Jenelle Pifer 10 a.m.-5 p.m. Exhibit continues through Jan. 9. 4400 Forbes Ave., Oakland. $11-15. 412-622-3131 or www.carnegiemnh.org

Every couple of years we highlight Western Pennsylvania's premier showcase for kick-ass Paleolithic technology. That's right, sports fans, it's the Meadowcroft Atlatl Competition. The weekend-long contest at the Meadowcroft Rockshelter and Historical Village pits competitors from around the nation in hurling slender, 6-foot darts with spear-throwers modeled on the ones Native Americans hunted with millennia ago. But anyone's welcome to try his hand -- and, after you've perforated a few hay bales, to explore Meadowcroft's prehistoric rockshelter, Indian village and more. BO Noon-5 p.m.; also 1-5 p.m. Sun., June 20. Avella, Pa. Free with admission. 724-587-3412 or www.heinzhistorycenter.org

We're months out from the next visit from the Browns, but never fear: This weekend is full of chances to hate on Cleveland. Not only do the Indians play the Bucs in interleague play; the Burning River Roller Girls take on Steel Hurtin', the all-star team from the Steel City Derby Demons, tonight at Romp 'N Roll. In what's slightly less of a grudge match, the Blitzburgh Bombers take on Akron's Neo Rock and Roller Girls to open the night. The Derby Demons request that you wear a black shirt to show your team pride this time around. AM 6:30 p.m. 1661 E. Sutter Road, Glenshaw. $10-15 (kids under 10 free). 412-486-4117 or www.steelcityderbydemons.com

Hold onto your beards: Blitzen Trapper is back with a brand-new album, Destroyer of the Void, featuring the almost ELO-smooth ballad "Heaven and Earth." Started in Portland, Ore., in 2000, the indie-Americana sextet combines lo-fi rock, wooly folk, AM-radio gold and some mystical boogie reminiscent of the Dead. Blitzen Trapper caught fire with its third self-released album, 2007's lauded Wild Mountain Nation, and in short order signed with Sub Pop. The band plays Diesel tonight with openers The Moondoggies. Aaron Jentzen 7 p.m. (doors at 6 p.m.). 1601 E. Carson St., South Side. $14 ($16 day of show). All ages. 412-431-8800 or www.dieselpgh.com

Australia's Eddy Current Suppression Ring plays rock music that belongs on the rougher edges of the '60s garage scene, but could properly be considered punk as well. Jangly, messy guitars and fuzzy bass provide a backdrop for singer Brendan Suppression (they all have electrical engineering noms de guerre) to bark out often-staccato, gruff vocals. Fans of Nuggets-style '60s garage and bands like The Modern Lovers should take note -- the Melbourne quartet plays the garage of Pittsburgh rock bars, Gooski's, tonight with Kim Phuc and Dark Lingo. AM 9 p.m. 3117 Brereton St., Polish Hill. 412-681-1658

Break out that black eyeliner, put on your fav tight jeans and post a big "OMG" in instant messenger profile -- the third annual Bamboozle Roadshow is coming to town. With Boys Like Girls, All Time Low, LMFAO, Good Charlotte and Simple Plan headlining the concert, and many other pop-punk and soft-core punk bands, it's a show made in MySpace heaven. The all-day event begins at noon at The Trib Total Media Amphitheatre at Station Square. KS 125 W. Station Square Drive, Station Square. $32.50. All ages. 412-368-1631 or www.tribtotalmediaamp.com

In the crazy theatrical world of playwright Amy Hartman, characters pushed to the edge reveal their humanity, and everyone else's. On the darkly comic heels of Disinfecting Edwin and The Chicken Snake, the latest Pittsburgh premiere by locally based Hartman is Mad Honey, in which a 1950s high school geek gets a taste of the hallucinogenic sweet with which he poisoned some bullies. That summons an oracle who sends him on an odyssey of his own. The Unseam'd Shakespeare production stars Autumn Ayers, Laurie Klatscher and Matt McNear; it's directed by Robin Walsh, herself one of Pittsburgh's top stage actors. It opens tonight. BO 8 p.m. Continues through July 18. Cathedral of Learning, Forbes Avenue at Bigelow, Oakland. $18-25. 412-394-3353 or www.unseamd.org