Because Naomi Iizuka's 36 Views is set partly in the loft of a shrewd art dealer with an affinity for Japanese antiques, the play supplies its audience with oodles of lovely props to admire. Quantum Theatre's new production, opening Thu., July 30, showcases ancient scrolls and woodcuts, too. But the real visual treat, says director Karla Boos, is the performance space --Washington's Landing. The audience sits in an amphitheater built into a hillside, and, weather permitting, should enjoy sunset views. "The island is just beautiful," says Boos. "It has a very formal Asian feel to it." Some of the action takes place in the 11th-century Japan chronicled in a forged journal-like "pillow book." (The production features Rebecca Hirota, pictured.) So the island, which evokes traditional Japanese landscaping, seemed an ideal backdrop. The book, full of the romantic secrets of a royal courtesan, becomes a catalyst for the characters' musings about what really constitutes a work of art; personally, too, the characters struggle with authenticity. The play's intricate plot swims with deceptions between art-maker and art-dealer, journalist and subject, lover and lover. And it "asks the question ever more deeply, 'What makes something real?'" says Boos. The play debuted in 2001, at the Berkley Repertory Theatre, and like many of Iizuka's plays, it blends ancient Japanese and contemporary Western theatrical elements. Though it's set largely in contemporary Boston, the play has many "Kabuki moments," accompanied by ancient Japanese instruments. After sunset, Shoji screens on the darkened stage will be lit by projected images. "We can only present real objects for one hour of daylight," says Boos. "The objects become less real as it gets darker." While this lighting trick was the hardest challenge for Quantum, says Boos, for audiences the trick is uncovering the play's mystery. "I think the audience will have an active sense of trying to figure it out," she says. Andrea Bullard Thu., July 30 through Aug. 30. Washington's Landing. $16-40. 412-394-3353 or quantumtheatre.com.

Efforts to use the arts to grow Braddock continue with the grand opening of the Neighborhood Silk Screen Studio, a community resource facilitated by the artist collective known as Transformazium. The collective is based in an old church it's renovating as an art center, but the silk-screen studio is in the ever-more-bustling Braddock Carnegie Library. At tonight's reception, enjoy silk-screening demos, an open house at the library's ceramic studio, and a conversation about art in the neighborhood featuring Transformazium's Swoon. A renowned, New York-based street artist, Swoon's beautiful life-sized portraits graced underused Pittsburgh buildings for months after an exhibit she did in Braddock a couple years back. Bill O'Driscoll 5:30-8:30 p.m. 419 Library St., Braddock. Free. 412-351-5357 or www.transformazium.org

You might have experienced "guitar church," but the Acme Church of Universal Love and Music takes it to a whole other level, with its decidedly hippie vibe and frequent large-scale concerts. This weekend, the Church hosts a Funk Fest featuring heavy hitters on the funk and jam-band scene, including 420 Funk Mob, The New Mastersounds, Ivan Neville's Dumpstaphunk and Pittsburgh's own Jazzam. The love may be universal, but it ain't free: Weekend passes are $80, which includes camping, or $100 at the gate (kids under 14 free with adult). But get your ass to Acme, and your mind will follow. Aaron Jentzen 4-11 p.m. Also noon-11 p.m. Sat., Aug. 1, and noon-9 p.m. Sun., Aug. 2. 371 Bear Rocks Road, Acme, Pa. 724-547-2525 or www.ilovemusicchurch.org

Inspired in part by Studs Terkel, writer and researcher Chuck Lanigan collects stories told by everyday people. Like scholar Mike Rose, Lanigan focuses on stories about work, past and present. And like the late Spalding Gray, Lanigan weaves those stories with fiction and memoir to explore who we are as individuals and a community. Join Lanigan tonight and tomorrow for the premiere performance (audience feedback encouraged) of To Be Of Use: Stories of Labor and Identity in Southwestern PA. It's part of Future Tenant gallery's Trespass series. BO 7 p.m. Also 7 p.m. Sat., Aug. 1. 819 Penn Ave., Downtown. $5. 412-325-7037 or www.futuretenant.org

Pardon the pun, but it's hard to believe the Hard Rock Café has been here for seven years already -- I remember attending the grand opening, which included a set by Butch Walker. (I wonder if they have any of his stuff on the walls ...) Tonight, the global institution celebrates its local anniversary with a show featuring Buffalo's Son of the Sun, a five-piece band that glories in the lush sounds of '60s pop on its new EP, Before the After. AJ 10 p.m. (doors at 9 p.m.). 230 W. Station Square Drive, Station Square. $5. 412-481-ROCK

It's another resurrection of Dormont's Hollywood Theater. The latest hometown plot twist is that the classic, single-screen neighborhood venue will be managed by Bruce Lentz, who for years ran the nearby Incredibly Strange Video store. Lentz is working for Motion Picture Heritage, a Franklin, Ind., an outfit whose principals include B-movie-maker Jim Wynorski. The new Hollywood reflects their shared aesthetic, with a projected roster of classics (Casablanca screens tomorrow), B titles (Rocky Horror returns next week) and contemporary indie fare. Tonight's grand reopening features live music by Weird Paul Petroskey plus a B-fest of screenings: Vampire in Vegas, Cry of the Winged Serpent, and Wynorski's own Chopping Mall. BO Pre-party at 6 p.m.; screenings follow. 1449 Potomac St., Dormont. $6 per film ($4 kids). 412-344-1245 or www.hollywooddormont.com

It was clear a few years back that local young guns Meltdown had the thrash thing down, from the blazing guitar solos to the muscle-T-and-tight-jeans aesthetic. For those who lost track when they moved to L.A.: The band signed with Nuclear Blast Records, changed its name to Mantic Ritual, and rode the boomerang back to Pittsburgh, where its members live today. Its acclaimed debut album, Executioner, is at once nostalgic and fresh -- no pretense, just awesome shredding from some dudes who love metal. They play 31st Street Pub tonight along with Satan's Sidekick, Rattlehead and Devastator. Andy Mulkerin 9 p.m. 3101 Penn Ave., Strip District. $5. 412-391-8334 or www.31stpub.com 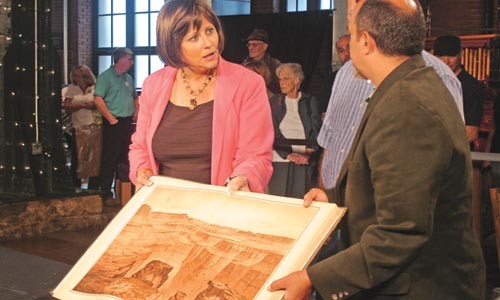 Everyone's looking for a way to get a few extra bucks right now. Invest in gold. Divest of gold. Busk with your ukulele on roller skates. The Senator John Heinz History Center has an alternative: Figure out how much that stuff in the attic is worth. KDKA-TV's Pittsburgh Hidden Treasures, an appraisal show, begins its second season there today. The episodes shot today will air in the fall; local folks are encouraged to bring memorabilia, furniture, old books and art. If you're lucky, you and your antiquities might end up on TV. AM 10 a.m.-4 p.m. 1212 Smallman St., Strip District. Free with museum admission ($10). 412-454-6000 or www.heinzhistorycenter.org

Jazz seems the perfect accent to lazy summer evenings, and it's coming free to a park near you every Sunday this month. Citiparks has corralled some of the city's finest jazz musicians for its annual Reservoir of Jazz series. Tonight's guest is The Gerald "Shotgun" Haymon Collaboration, one of the top contemporary jazz ensembles in Pittsburgh. The foursome plays the Highland Park lawn, where picnic food is welcome, so long as it doesn't require an open flame. AB 5-7 p.m. Highland Avenue and Reservoir Drive, Highland Park. Free. 412-255-8975

Into the Woods begins with "once upon a time," but the fairy-tale clichés end there. The musical has Cinderella summoning her dead mother in a graveyard, Rapunzel wandering the desert and Little Red Riding Hood donning a wolf-skin cape. Opening tonight at the Benedum, a new Pittsburgh CLO production of the Stephen Sondheim classic reconfigures several of Grimm's fairy tales into a cautionary tale about a baker's quest to break the infertility curse placed on his wife. AB 8 p.m. Continues through Aug. 9. 719 Liberty Ave., Downtown. $24.50-70.50. 412-456-6666 or pittsburghclo.org

Eclectic brother-and-sister indie darlings The Fiery Furnaces returned with their latest studio album, I'm Going Away, an easygoing listen that delves into a number of classic pop idioms. The storytelling lyricism is the most notable aspect of an otherwise middling effort and has managed to garner the record some swell reviews and even a few Dylan comparisons -- which, in the case of several tracks, aren't so far off. The band plays Brillobox tonight in an "Evening with ..." setup, with no openers. AM 9:30 p.m. 4104 Penn Ave., Bloomfield. $15. 412-621-4900 or www.brillobox.net