In February, no one blames you for staying in. Well, actually we do. Winter's halfway over -- get used to it, already. And on Fri., Feb. 5, hone your acclimation skills by ducking in and out of the East End's plethora of art galleries and theaters. The biggest concentration is, as usual, along Penn Avenue, up Friendship/Garfield way. At the monthly Unblurred gallery crawl (www.paai.org), Pittsburgh Glass Center goes photographic with Behind the Lens; the month-long show features more than 75 photographs by Nathan J. Shaulis, who since 2005 has documented artists working with molten glass and more there. Down the street, ongoing shows include Most Wanted Fine Art's provocatively titled Guests Undressed -- referring not to you, cold person, but to the subjects of paintings by Lauren Toohey and Sam Thorp (viewed to live music by Grand Snafu and His Girl Friday). Meanwhile, Dance Alloy Theatre hosts student dancers from three regional performing-arts high schools: Pittsburgh's CAPA, Cleveland's CAPA and Midland, Pa.'s Lincoln Park Performing Arts Charter School. (Tickets are $7.) Another new wrinkle is Unstill'd, at the house/studio known as Schmutz Lodge (just up the hill, at 5405 Broad St.). This is where participants in the Brew House's Distillery Program landed when that South Side institution shut down indefinitely last fall. Now eight artists, including Dave English, Heather Pinson and Becky Slemmons, unveil the site-specific fruits of their one-month residency. Blocks away, in East Liberty, the Kelly-Strayhorn Theater hosts Go East! This showcase for local talent ($5) is headlined by the inimitable Squonk Opera, in a cabaret-style performance. If it's more free art you want, over in Shadyside, the Pittsburgh Center for the Arts opens Cluster, a huge, full-house group show for local artists working in every conceivable medium ($5 donation requested; www.pittsburgharts.org). Meanwhile, Ellsworth Avenue's First Fridays Artwalk features the opening of AAP in 3D. The show at Morgan Contemporary Glass Gallery (www.morganglassgallery.com), part of the Associated Artists of Pittsburgh's year of centennial exhibitions, is a multimedia sculptural group show with names like Atticus Adams and Judi Charlson. And downhill, in Lawrenceville, doings include Zombo Gallery's opening reception for Where's My Huffy? (www.zomboworld.com). Artist Jason Woolslare's paintings address "freedom, freedom lost, childhood exploration, societal ills and adventure," as inspired by a bike he once owned. Awwww. Bill O'Driscoll Fri., Feb. 5; most events begin at 6 p.m. and run until 9 p.m. or later.

A classic 17th-century comedy is made over with help from the 16th and 20th in University of Pittsburgh Repertory's production of Scapin. Moliere's title character is a servant scheming to aid four mixed-up lovers. He's played by Gale McNeeley, a star of commedia dell'arte, which originated as Italian street theater in the 1500s. Staging a script adapted by Bill Irwin and Mark O'Donnell, director Holly Thuma sets the action as if in a vintage American slapstick movie. McNeeley, in baggy pants, is supported by a mostly student cast of Keystone Kops and more. First-week performances continue tonight. BO 8 p.m. Continues through Feb. 14. Studio Theatre (Cathedral of Learning basement), Forbes Avenue at Bigelow, Oakland. $12-22. 412-624-7529

It's the first local staging in years for Buried Child, the Sam Shepard drama that won the 1979 Pulitzer. Point Park REP's John Shepard directs this dark look at a Midwestern family with a secret -- and a whole lot of crazy happening, from ranting, alcoholic grandparents to a son who's lost a leg to a chainsaw. L.A.-based actors Steve Mendillo and Lisa Richards join a production featuring locally based actors Jeffrey Carpenter and Patrick Jordan. Tonight is the first performance. BO 8 p.m. Continues through Feb. 21. Pittsburgh Playhouse, 222 Craft Ave., Oakland. $24-27. 412-621-4445 or www.pittsburghplayhouse.com

Ernie Hawkins' performance tonight at the Pittsburgh Center for the Arts -- presented by the Calliope folk-music society -- is just the latest chapter in a relationship that goes back to the mid-1960s, when a teen-age Hawkins and friends started a folk concert series there called Shady Grove. Tonight, the renowned blues and ragtime guitarist performs in the PCA's newly renovated Simmons Hall, with a full band, featuring the Boilermaker Jazz Band's Paul Consentino on clarinet, percussionist Rich Strong, harmonica player Marc Reisman, and Roger Day on tuba. Aaron Jentzen 7:30 p.m. 6300 Fifth Ave., Shadyside. $17 ($15 members). 412-361-1915 or www.calliopehouse.org

The entertainment at d'vine Bar & Lounge is usually local, but if you head there tonight, you'll be met with a Baltimore post-rock band with a familiar face. The eclectic ...soihadto... stakes its claim as a mathy post-emo band with nods to bands like Shotmaker, and features Duff Goldman, of Food Network's Ace of Cakes, on bass. The band's album, Adventure Stories (Not Based On Fact?), just released on Chicago's Grape Juice Records, was recorded by well-known engineer J. Robbins. Part of the album's sales go to a fund for Robbins' son, Cal, who has spinal muscular atrophy. With Dos Osos, Willis Tree. Andy Mulkerin 9 p.m. 12017 Perry Hwy., Wexford. $3. 724-933-5533 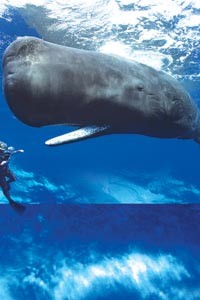 Performers and conservationists come together today for A Whale of a Day, an educational ode to the graceful giants of the sea that swim alongside the Carnegie Museum of Natural History's Whales/Tohorā exhibit. IUP's Dance Theater presents a performance piece that uses music, poetry and movement to illustrate connections between whales and humans. And award-winning conservationist Angelia Vanderlaan lectures on whaling history and protection efforts. Anna Reilly 10 a.m.-4 p.m. 4400 Forbes Ave., Oakland. Free with museum admission ($11-15). 412-622-3131 or www.carnegiemnh.org

There was a time (middle school) when being in the orchestra was social suicide. Now, David Bernard Roumain, a Haitian-American violinist and composer, has made strings cool again. Roumain blends genres -- classical, hip hop, jazz -- to create multilayered pieces that are dreamy, soulful, energetic and passionate. His stylistic range finds footholds with traditionalists and trendsters alike; the man just played American Idol with Lady Gaga, folks. Plus, he's got some wild dreads. Looks like the days of the dork-estra are over. AR 8 p.m. August Wilson Center Theater, 980 Liberty Ave., Downtown. $28-30 412-456-6666 or www.pgharts.org

Nick Oliveri is known as many things -- frontman for Mondo Generator, and bassist for The Dwarves and desert-rockers Kyuss, among many others. One doesn't acquire a hard-rock discography as extensive as Oliveri's by being shy; in Pittsburgh, he left an indelible imprint when he took the stage at Laga with Queens of the Stone Age ... completely naked. Tonight, though, Oliveri plays a solo acoustic show at Garfield Artworks (presented by frequent CP contributor Manny Theiner), in support of his Death Acoustic collection of home recordings. Hopefully, there won't be a skin-flute solo this time. Also performing are Chrononaut and Andrew Fitz. AJ 8 p.m. 4931 Penn Ave., Garfield. $7. All ages. 412-361-2262 or www.garfieldartworks.com

Fans of the offbeat, take note: Maniacal Pittsburgh artist, performer and wordsmith Alexi Morrissey is creating an original stage work. It incorporates theater, street theater and sculpture. ("BIG sculpture" is the actual claim.) Morrissey is currently an artist-in-residence at the New Hazlett Theater. Take a Letter, which explores communication in the modern world, doesn't open until May. But at tonight's free open rehearsal of Morrissey's script for two actors, you can catch art-in-the-making. BO 8 p.m. Allegheny Square East, North Side. Free. 412-320-4610 or newhazletttheater@gmail.com

Become a Tree Tender, and speak for the trees! In three hands-on sessions, you'll learn all that you need. From mulching and naming to pruning and staking, you'll know all the knows for young-tree care-taking. Sign up online for the Tree Tender class; you can help Friends of the Pittsburgh Urban Forest once you pass. So join this nonprofit and save our town's trees (and keep them away from Once-lers and Thneeds!). AR The first of four courses consisting of three evening classes each begins Feb. 17, in the Strip District; future courses are in various locations. Single-day weekend courses are offered in June and July. $40. 412-362-6360 or www.pittsburghforest.org