Maybe we can't stop wars yet. But we can make a difference on global peace and justice. Amnesty International's Human Rights Write-a-thon, an annual evening of letter-writing at Calvary Episcopal Church, targets public officials at home and abroad on everything from the death penalty to individual rights violations. Ten cases are available -- write on one or all 10 as Amnesty seeks to send 300,000 letters from Write-a-thons nationally. Refreshments are included. Bill O'Driscoll 6:30-9 p.m. 315 Shady Ave., Shadyside. 412-404-2849 or info@amnesty.org

It's an unholidayesque event for a holiday cause as Jimmy Cvetic hosts his annual toys-for-kids benefit for the Western Pennsylvania Police Athletic League. The retired narcotics detective and boxing coach, along with a cop known as The Monk, will offer harrowing, darkly comic tales from the underbelly of police work. Leavening the atmosphere at the Steelhouse are live painting by Kevin "The Nerve" Wenner and classic-rock covers by Bon Journey. BO 7 p.m. Station Square, South Side. Donation: $20 or toy. 412-434-1372

The practice of DJing -- in the sense of "playing songs for other people" -- has become infinitely easier with recent technological developments. But the art of DJing -- which is more than just hitting "random" on your iTunes -- remains somewhat esoteric. Beatmatching, mixing and general cultural command and pastiche all figure in tonight's Go DJ Go! Workshop for Teens. The hands-on lesson for kids ages 13 to 19, from local DJs Mary Mack, Thermos and James Gyre, is sponsored by Arts Greenhouse, a hip-hop education program associated with Carnegie Mellon. Andy Mulkerin 5 p.m. Young Men and Women's African Heritage Association, 1205 Boyle St., North Side. Free. www.pghbeatmakers.com

The No Name Players return with the local premiere of Breaking Up. The 1990 drama by Michael Cristofer (who won 1977's Pulitzer for The Shadow Box), is a two-hander following an Everycouple through the twists and turns of their relationship. It's staged Downtown starting tonight in a production featuring original work by 11 local artists (one artwork per scene). Tressa Glover and Jody O'Donnell star; No Name artistic director Don DiGiulio directs. BO 8 p.m. Show continues through Dec. 19. 937 Liberty Ave. (Bricolage space), Downtown. $12. 412-207-7111 or reservations@nonameplayers.org

Fin Fang Foom, despite its silly-sounding name, is a behemoth of post-rock, creating tracks of epic size and depth since the mid-'90s. The Chapel Hill-based band's new record, Monomyth, balances the heavy with the airy (vibraphones figure in) and recalls the post-rock dabblings of another Chapel Hill band, Milemarker, whose Dave Laney appears on the record. Eddie Sanchez's deep, nearly monotone vocals mute the effects of wandering guitars, making for a beautiful sonic topography. The band plays tonight at Smiling Moose with Knot Feeder, Token Black Guy and Peregrine. AM 9:30 p.m. 1306 E. Carson St., South Side. $7. 412-431-4668 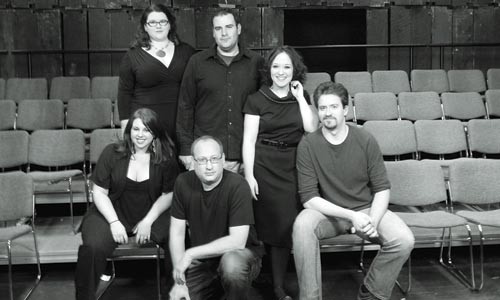 Friday Nite Improv celebrates 20 years of no-budget, late-night comedy in a basement by moving upstairs to a real theater for a Saturday evening of laughs. As Pittsburgh's longest-running comedy event, FNI has amassed quite the collection of hosts and performers. Tonight, several of them (including Chris Potocki and Jeff DeVincent) return from around the country to the informal setting where they honed the audience-participation comedy skills that some alumni have employed writing for 30 Rock, Funny or Die.com and Saturday Night Live. LL 8 p.m. Henry Heyman Theater, Stephen Foster Memorial, Forbes Avenue at Bigelow, Oakland. $5. www.fnipgh.com

Just last month, Pittsburgh roots-rock hero Joe Grushecky released his 13th album, with the South Side shout-out title, East Carson Street. Tonight, though, you can catch him in the Strip, and under a different banner: The original Iron City Houserockers -- the legendary Pittsburgh band that got Grushecky started in the late '70s -- is staging a reunion show at Altar Bar. Have a good time, but get out alive. Aaron Jentzen 9 p.m. (doors at 8 p.m.). 1620 Penn Ave., Strip District. $12. 412-263-2877 or www.altarbarpittsburgh.com

The Round Corner Cantina is a bittersweet experience for those who can't visit this new nightspot without shedding a tear for the un-classy attitude and cheap drinks at Sufak's, the neighborhood bar Cantina replaced. But if you're not some cranky Lawrencevillian -- or just need to get over it already -- come dance the night away at SnowBall: A Winter Prom, a celebration of a different kind of nostalgia. DJs Ed Um and J. Malls will spin tunes evocative of '80s proms, and prom attire gets you half off the $10 cover. AJ 10 p.m. 3720 Butler St., Lawrenceville. 412-904-2279 or roundcornercantina.com

With the long winter months looming ahead, many of us will prepare to hibernate, spending long periods in the same enclosed spaces. Start training for the season today at Winter Void 2, a sprawling musical showcase at ModernFormations, presented by Dynamo Sound Collective. The performers are too numerous to list, but include Midnite Snake, Melissa St. Pierre,  Margaret Cox, Josh Beyer and Black Forest, Black Sea. With any luck, you'll leave with some new music to fill a winter void of your own. AJ 3-10 p.m. 4919 Penn Ave., Garfield. $7. All ages. 412-362-0274 or www.modernformations.com

We can't fault you if you've never heard of The Guest List, but the local pop-punk band's got a blitz of events coming up that should ensure that you know its name. The band, fronted by the nasally voiced Aaron Hopelyss, releases an EP, My Dear Dead Natalie, tonight at Brillobox. Then, next month the group hits up Belvedere's to release a live DVD recorded at Shadow Lounge last month. Armed with noms de guerre, straight-ahead punk tunes and a multimedia catalog, The Guest List is serious about 2010. Mason Summers and The Deadmites open. AM 9 p.m. 4104 Penn Ave., Bloomfield. $5. 412-621-4900