Anybody feeling "radically optimistic" about the future? Us neither. But those are the words with which the Miller Gallery describes the visionary proposals in its new exhibit, 29 Chains to the Moon: Artists' Schemes for a Fantastic Future. Inspired by an old Buckminster Fuller quote about conserving resources through better design and more human cooperation, guest curator Andrea Grover gathers work from three artists. At least one sounds like the Full Bucky: the "living architecture" of Open_Sailing's "seasteads." Stephanie Smith, meanwhile, suggests the nonmonetary exchange of resources via a network of online and meatspace communes. And Terreform ONE co-founder Mitchell Joachim offers ideas for integrating ecological principles in urban environments. The show's up today; further stoke your optimism (or challenge your pessimism) with the free gallery tour and opening reception on Sept. 11. Bill O'Driscoll Noon-6 p.m. Carnegie Mellon campus, Oakland. Free. 412-268-2900 or www.cmu.edu/millergallery 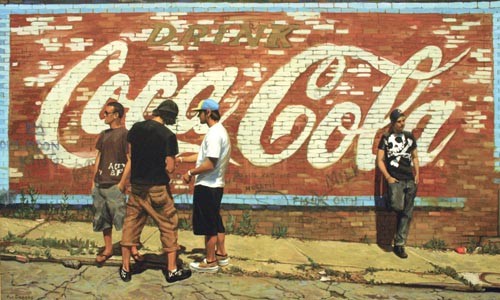 When your name is Justin Townes Earle, you've got a lot to live up to. But when your father is Steve Earle, chances are you've also got the genes to help out. The younger Earle is a member of the Bloodshot Records roster and a consummate songwriter in his own right: Classic country twang is the currency he deals in, and he does it well. He also doesn't go out of his way to avoid references to his lineage; in the song "Mama's Eyes," he wrestles with his life with his father, just as many with not-so-famous dads have. He plays Diesel tonight; local songster T. Mitchell Bell opens. Andy Mulkerin 7 p.m. 1601 E. Carson St., South Side. $14 ($16 at the door). 412-431-8800

Nantes, France, may not be where you'd expect to find a finger-pickin' singer-songwriter obsessed with American folk, but the world is a funny place. That singer would be Vincent Dupas, whose bittersweet melodies draw on the likes of Will Oldham and Leonard Cohen. Dupas visits Morning Glory Coffeehouse tonight with his project My Name Is Nobody. Also performing is local singer-songwriter Maura McAndrew. Aaron Jentzen 7:30-10 p.m. 1806 Chislett St., Morningside. Donation requested. All ages. 412-450-1050 or www.moglocoffee.com

August is too hot for suits of armor. Even vassals and knaves can get a bit sweaty. But that won't stop the Pittsburgh Renaissance Festival. The amiable amusement-park-style celebration of all things medieval (well, all fun things medieval) returns to its accustomed encampment for six weekends. There's live music (including an act featuring a four-ton carillon) and live mounted jousting. The stage acts range from fire-eaters and acrobatic comedians to the "Teutonic rapping duo" The German Brothers. The corny merriment -- no Inquisitions, promise -- commences today. BO 10:30 a.m.-6 p.m. Route 31, West Newton, Westmoreland County. $14.95 ($6 kids; free for kids under 12). 724-872-1670 or www.PittsburghRenFest.com

Twenty-five bands, one day, one stage -- that's the mission of the second annual Steel City Music Festival, at the Irish Centre of Pittsburgh. The all-ages blowout features Asking Alexandria, Let's Get It, Dr. Acula, and We Came as Romans, plus many more; the unifying theme seems to be MySpace hair -- you know the sort -- rocked by 80 percent of the musicians. Headlining is Attack Attack!, a young band from Columbus, Ohio, that combines screamo, techno and Auto-Tune vocals; hilarity ensues. The band has achieved more notoriety for the musicians' crouching, crab-like stance while playing -- on display in the "Stick Stickly" online video -- dubbed "crab-core." AJ 11 a.m. 6886 Forward Ave., Squirrel Hill. $14 ($16 day of show. 888-690-9875 or www.myspace.com/steelcitymusicfest

If Jack Kerouac were yet wandering, he'd find nowhere for a person of his budget and temperament to stay in Pittsburgh. OK, there's always crash pads -- but the city's lone hostel closed in 2004. The Pittsburgh Hostel Project wants to change that. Tonight at Viaduct Studios, the independent group (which includes former managers of the old hostel) hosts Sleeping with Strangers: An Economic Stimulator. The benefit and discussion forum includes live music, DJs, and free food and beer. There are also raffles and a Chinese auction. AB 5-11 p.m. 622 Second Ave., Downtown. Sliding scale: $5-50 at the door. 412-241-0675 or www.pittsburghhostel.org

Japan, Venezuela and North Africa may exist in different hemispheres, but tonight at the Union Project they'll be side by side. The Biggest Diversity Event in Pittsburgh gathers the cultures of 21 countries to line the inside of the Union Project with booths offering ethnic food and crafts. Performers in traditional costumes exhibit Japanese sword dancing, Middle Eastern belly dancing, and dance from every coast of Africa. Representatives from regional businesses also speak about diversity in the workplace. AB 5-9 p.m. 801 N. Negley Ave., Highland Park. Free. 412-759-4565

If you attend the Sprout Fund's Hothouse fundraiser party tonight, expect to feel like a kid at a carnival. Effervescent lighting, a smorgasbord of local culinary favorites and spontaneous pavement performances transform the new Bakery Square complex. If you feel like dancing, the live music pulses all night, including a set by local rock duo Zombi -- its first in over two years. (See here.) Inside you'll find installations by local art groups, displays by area publishers, and theater and dance on a cabaret stage. They're all grassroots community projects that Sprout funds, and proceeds are plowed back into the effort. AB 7-11:55 p.m. 6501 Penn Ave., Larimer. $50 ($150 VIP; $25 students). 412-325-0646 or sproutfund.org

Screening series Jefferson Presents ... returns with a half-dozen shorts, most from a heyday of American cinematic experimentation. Highlights include selections from For Life, Against the War, a 1967 compilation of work made for the Vietnam-era Week of the Angry Arts, and featuring such luminaries as Robert Breer, Storm de Hirsch and Stan Vanderbeek. Also: Alain Berliner's "Color Wheel" (1977) evokes the changing light of a full year; Nancy Graves' "Isy Boukir" (1971) is an aesthetic study of camels; and the "illustrated funky blues" animate Mike Henderson's "Dufus" (1970). As always, all films screen at Garfield Artworks in their original 16 mm glory. BO 9 p.m. 4931 Penn Ave., Garfield. $5 ($4 students). presents.jefferson@gmail.com

Just when you thought the controversy had finally quieted down, the King of Pop is back in the news because today would have been Michael Jackson's 51st birthday. Celebrate his musical legacy at Down & Derby, Belvederes' monthly roller-disco party. The tribute features DJs Hank D and Ollie 6.0 FM, giving you an excuse to wear one sparkly glove or some other crazy outfit. Which MJ will you emulate on the skates? Don't stop 'til you get enough. Lydia Heyliger 9 p.m.-2 a.m. 4016 Butler St., Lawrenceville. $6 with RSVP at www.downandderby.com; $10 at the door. 21 and over. 412-687-2555

It's more high-concept from the TypewriterGirls Poetry Cabaret. No, we don't mean the "classic and punk rock burlesque dancing" (by The Bridge City Bombshells); the magic (by Mark Swindler); readings from poets Sandra Beasley and Nancy Krygowski, and fiction writer Sherrie Flick; or even the music by veteran performance artist Steve Pellegrino. Rather, we refer to your dada-inspired hosts, Margaret Bashaar and Crystal Hoffman, in Typewriter Girls Gone Biblical, "fixing" Bible stories like the one where Jesus damns that helpless fig tree. The whiskey and typewriter games, too, are begotten at Howlers Coyote Café. BO 7 p.m. 4509 Liberty Ave., Bloomfield. $5. www.typewritergirls.net

Designed with both the athletic and the uncoordinated in mind, hydrobikes can provide brisk exercise yet are easy to pedal even if you can't ride a regular bicycle. Today at Raccoon Creek State Park, Venture Outdoors hosts a hydrobike excursion across the 101-acre Raccoon Lake. The bikes don't make much noise either, so you can soak in mountain views untroubled. AB 9-11 a.m. 3000 State Rt. 18, Hookstown, Pa. $15. 412-255-0564 or ventureoutdoors.org

Maddox became an Internet celebrity back before most people even knew what blogging was. His site, The Best Page in the Universe, rose to fame nearly a decade ago with his post, "I am better than your kids," which harshly graded children's artwork. His book, The Alphabet of Manliness, adorned the New York Times best-seller list for months. Today at Borders Eastside, Maddox plugs and signs a revised edition, featuring new "fratire" about feminism, plus statistics about men. A must for those into sophomoric humor, gratuitous swearing and complaints about everything. LH 6 p.m. 5986 Penn Circle South, East Liberty. Free. 412-441-1080