If you like bike lanes and other signs of bike-friendliness, thank, in large part, Bike Pittsburgh. And if you like some socializing with your two-wheeling, check out the group's seventh annual Bikefest. It's 10 days of rides and other independently organized doings under BikePGH's umbrella. The roughly 70 events include: bike tours of local pools and cemeteries; costumed theme rides, from zombies to Batman (including the Sun., Aug. 14 ride to Downtown's Dark Knight set); bike-polo matches; and repair classes. Most events are free, though tonight's kickoff fundraising party is ticketed. The party, at Pittsburgh Opera, features Balkan-influenced, horn-driven dance band Lungs Face Feet. Bill O'Driscoll Party: 6-8 p.m. (VIP; $100) and 8 p.m.-midnight ($20-40). 2425 Liberty Ave., Strip District. Bikefest continues through Aug. 21. www.bike-pgh.org

The Kelly-Strayhorn Theater's summer of dance residencies continues tonight with Staycee Pearl dance project's Interim ONE: b sides. Pearl and a half-dozen featured dancers present a mixed of re-envisioned previous works as well as some brand-new short pieces. Of note is a partial preview of upcoming evening-length work Octavia, based on the life and work of famed science-fiction author Octavia Butler. Also notable: The evening's soundtrack will be mixed live by Herman Pearl (a.k.a. DJ Soy Sos). BO 8 p.m. 5941 Penn Ave., East Liberty. Pay what you can. www.kelly-strayhorn.org

For fans of the cult-classic film Basket Case -- and we know you're out there -- tonight's program at the Hollywood Theater is almost too big to fit in one basket. Naturally, the 1982 horror comedy about the man who keeps his ill-formed twin in a basket will screen. Before the film, take in a Q&A with Joshua Emerick, who's illustrating Fangoria's upcoming "Basket Case: The Comic." After the movie is the world premiere of Beverly Bonner's stage show, Casey -- 30 Years Later, that catches up with Bonner's character from the film. To be followed by another Q&A, and cake! Al Hoff 8 p.m. 1449 Potomac Ave., Dormont. $10. www.hollywooddormont.org

The UMOJA African Arts in the Park festival, "Celebrating Africa's Impact on Diverse Cultures," is in a new location this year: Downtown at Point State Park. The day-long event features African and African-diaspora music on the main stage, and a vendor marketplace -- the "Soko," in Swahili -- for arts, crafts and clothing. Other festival huts offer: interactive demonstrations of traditional African art forms like drum-making and head-wrapping; health education; and entertainment for the kids. BS 11 a.m. -8 p.m. Free. 412-224-4086 or www.africanartsinthepark.org

In the early '60s, the south of England was subjected to a rash of gang violence between motorcycle-riding Rockers and slick Mods on scooters. The rumbles in Bristol and Brighton caused a moral panic about the nation's youth, but a half-century later, in Pittsburgh, at the second annual Steel City Mods vs Rockers Vintage Motorcycle and Scooter Rally, switchblades and brawls have been traded in for contests for pin-up models and best bikes. The party on four blocks of Liberty Avenue in Bloomfield also features live music and an afterparty at Howlers Coyote Cafe. BS Noon-9 p.m. Liberty between Edmond and Pearl. $10. www.steelcitymodsvsrockers.com or 412-215-5532

When the Hazlett Theater closed, in 2003, it left a gaping hole in the local performing-arts scene. It was a big boost when, in 2006, the venerable North Side venue was reborn as the New Hazlett Theater. Today, fete the New Hazlett with a free all-day Community Celebration. The indoor/outdoor festival includes a live broadcast by radio's Saturday Light Brigade. Children's activities include a Puppet Happening show, hands-on art, and a 6 p.m. screening of the film Diary of a Wimpy Kid. There's also live music (on a solar-powered sound system) by the likes of soul/R&B performer Jerel Webster. BO 10 a.m.-10 p.m. 6 Allegheny Square East, North Side. Free. 412-320-4610 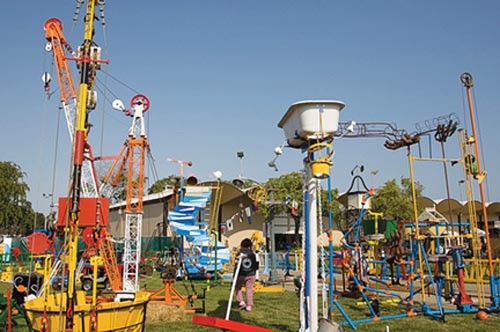 If one phrase captures the appeal of the touring spectacle known as the Life-Size Mousetrap, that phrase is "clown engineers." This 25-ton kinetic sculpture -- inspired by the classic board game -- and its attendant circus-style performers send a bowling ball through a Rube Goldberg contraption for the sole purpose of dropping a two-ton safe from a 30-foot crane. Physics? You bet! That's why the Mousetrap visits the Carnegie Science Center (co-sponsored by The Toonseum). While the Mousetrap's multiple daily performances are family-friendly, tonight's opener is a 21-and-over show featuring local vaudevillians Phat Man Dee, Andrew the Impaled and Guaracha Latin Dance band. BO 7:30-10:30 p.m. ($40-45; includes refreshments). Performances continue through Aug. 21. North Side. 412-237-3400