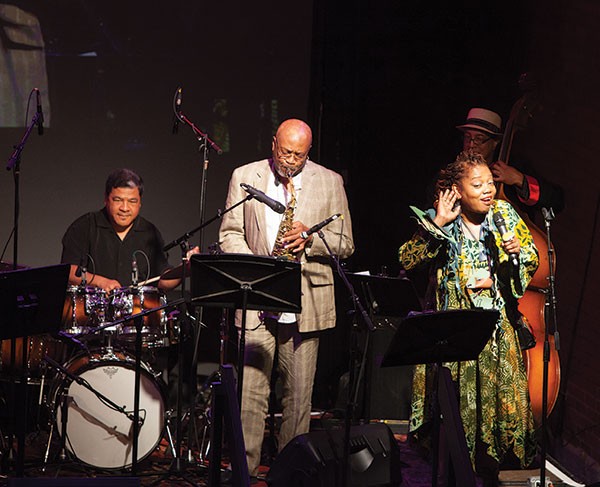 City of Asylum/Pittsburgh's Jazz Poetry Concert has been a hit since its inception. It annually draws hundreds for a free — and free-of-charge — blend of the two art forms, overseen by bandleader Oliver Lake and featuring internationally known poets. But its outdoors North Side venue left it frequently running for cover from rain, over to the New Hazlett Theater. So this year, COAP is pitching a giant tent in West Park and continuing rain or shine. And for its 10th anniversary, the group (which shelters writers persecuted in their home countries) plans a reunion concert of musicians and poets from years past. The Oliver Lake Big Band will be bigger than ever, with no fewer than 17 musicians, including saxophonist Lake himself (pictured at left), drummer Chris Beck, trumpeter Josh Evans, trombonist Terry Green and pianist Yoichi Uzeki. Most of the international array of poets are encoring, too, including T.J. Dema (a native of Botswana), Kei Miller (Jamaica) and Pittsburgh-born Gerald Stern, winner of honors including a National Book Award and induction into the American Academy of Arts and Letters. Joining them is newcomer Ali Cobby Eckerman, of aboriginal Australia. And while there'll be plenty of seats, don't be surprised if they fill up early. Bill O'Driscoll 7:45-9:45 p.m. Sat., Sept. 6. West Park (near the National Aviary), North Side. Free. Reserve seats at 412-323-0278 or www.cityofasylumpittsburgh.org.

The REP begins its season tonight with Of Mice and Men. Adapted by John Steinbeck from his own novel, the play follows migrant workers George and Lennie in their uphill struggle to find peace and stability in Depression-era America. Robert Miller, a frequent guest director at the REP, takes the story from your English-class memories to the Rauh Theatre stage with help from Leandro Cano, as Lennie, and Jarrod DiGiorgi, as George. Danielle Fox 8 p.m. Continues through Sept. 21. Pittsburgh Playhouse. 222 Craft Ave., Oakland. $15-27. 412-392-8000 or www.pittsburghplayhouse.com

In the centennial of the Great War, PICT Classic Theatre stages Observe the Sons of Ulster Marching Towards the Somme. Frank McGuinness' 1985 play tells the story of eight young Irishman, Protestant and Catholic, in the British Army and on an inexorable path to an infamous battle. Matt Torney, who comes from Belfast, Northern Ireland, directs a cast including such local favorites as Martin Giles, Jason McCune, Jonathan Visser and Tony Bingham. The first performance at the Charity Randall Theatre is tonight. BO 8 p.m. Continues through Sept. 20. Stephen Foster Memorial, 4301 Forbes Ave., Oakland. $15-54. 412-561-6000 or www.picttheatre.org

In his New York studio, artist and designer Sebastian Errazuriz draws while seated beneath a piano hung from the ceiling. Creations by this wildly imaginative, Chilean-born art-world star include: a floating coffin with an outboard motor (pictured); a functional wooden cabinet that guards its contents with countless bamboo spikes; and a graffiti wall juxtaposing a count of U.S. service members dead from suicide with the tally of those killed in combat in Iraq. Errazuriz's work has been exhibited throughout the U.S. and Europe; now the Carnegie Museum of Art hosts his first solo museum exhibition. Look Again incorporates found and repurposed objects, furniture, products, sketches, prototypes — and one dangling piano, in the museum's Hall of Architecture. Tonight's free opening party includes an artist talk. BO 6:30-9 p.m. (free). Exhibit continues through Jan. 12. 4400 Forbes Ave., Oakland. 412-622-3131 or www.cmoa.org

"It's home so we better make the best of it / I wanna make this country what it says it is," raps Brother Ali on his new album Mourning in America and Dreaming in Color. On the eve of a national tour, the socially conscious hip-hop artist and activist is uniquely suited to speak at tonight's Pittsburgh Hip Hop Collective discussion titled "Race, Religion and Hip Hop": He's an albino, born into a white family, who converted to Islam at age 15 and says he's always felt most at home among African-Americans. The event at Alloy Studios is hosted by local rapper and activist Jasiri X. The opening act is Blak Rapp Madusa. BO 7:30 p.m. 5530 Penn Ave., Friendship. Suggested donation: $5. www.rarenation.com

The Pittsburgh Irish Festival turns 24 with a three-day party at the Riverplex. Attractions include beverage tastings (you don't say), an Irish marketplace, food and dance. The musical acts, ranging from traditional to contemporary, include Scythian, Screaming Orphans, Makem & Spain and Pittsburgh's own Bastard Bearded Irishmen. The history-themed programming includes an appearance by David McDonnell, who is touring nationally with his new book ClanDonnell, about ancestors who started as mercenaries and whose story reflects Ireland's strife-filled history. BO 4-11 p.m. Also 11 a.m.-11 p.m. Sat., Sept. 6, and 9 a.m.-5 p.m. Sun., Sept. 7. 1000 Sandcastle Drive, Homestead. $8-14 (free for kids under 12). www.pghirishfestival.org

In 2005, Pittsburgh Shakespeare in the Parks debuted with two free weekends of As You Like It in Frick Park. PSIP has branched out: For its 10th season, the troupe has cast four city parks as the Forest of Arden in its reprise of Shakespeare's romantic comedy, with eight daylight performances over four weekends. It all starts this afternoon at Frick Park's Blue Slide Playground. (The other parks are West, Arsenal and Schenley.) PSIP artistic director and seasoned actress Jennifer Tober stars as Rosalind; the show's directed by Lisa Ann Goldsmith. For audiences, blankets and chairs are smart gear; picnics are welcome. BO 2 p.m. Also 2 p.m. Sun., Sept. 7. (Beechwood Boulevard and Nicholson Street, Squirrel Hill). Continues weekends through Sept. 28 (various venues). Free. www.pittsburghshakespeare.com

Six weeks back, we told you about the Lovelace Puppet Festival, created to honor the legacy of Margo Lovelace and her Shadyside-based puppet theater that enchanted generations of Pittsburghers. Well, a rainy summer intervened, and the fest was moved to today. At Shadyside Nursery, The Margo Lovelace Project presents performances by six local troupes, including Creative Citizen Studios, The Schmutz Company and 4th Wall Puppets. BO 5-9 p.m. 510 Maryland Ave., Shadyside. $10 (includes beverage with ID; free for kids). www.margolovelaceproject.wordpress.com

If you're not giving up on summer just because Labor Day is past — and really, why should you? — Venture Outdoors asks, "Why not learn kayaking?" Today's Family Beginner Paddle, at Kayak Pittsburgh in North Park, offers the basics. Participants 12 and older can paddle solo; younger kids can go tandem with an adult, and small toddlers can ride with two adults. BO 6-8:30 p.m. $10-29 ($50 per family). 412-255-0564 or www.ventureoutdoors.org