As a college student, Khet Mar (pictured) participated in the Burmese liberation movement. For distributing her political poems, Khet spent a year in jail, where she was tortured; after her release, her writings were censored by the military dictatorship. In 2009, she became a writer in residence at City of Asylum/Pittsburgh — the third of five writers persecuted in their home countries whom the group has sheltered to date. (North Side-based COAP, headed by Henry Reese, provides residents a stipend and health care for two years, and free housing for up to four.) Khet spent three years here with her husband and two sons; she says via email that she was for the first time free to write her short stories, essays and poems. (Her work has since been published in Myanmar/Burma, too.) Khet now works as a broadcaster and translator for Radio Free Asia in Washington, D.C. On Oct. 18, COAP marks its 10th anniversary with Exiled Voices 2014. The free event includes readings by all five COAP residents of writings that got them persecuted. Joining Khet are famed dissident Chinese poet Huang Xiang (who now lives in New Jersey); Salvadoran novelist Horacio Castellanos Moya (now teaching at the University of Iowa); and current residents Israel Centeno (Venezuela) and Yaghoub Yadali (Iran). The readings will be assisted by local talent including poet Toi Derricotte and Quantum Theatre's Karla Boos. Bill O'Driscoll 8 p.m. 318 Sampsonia Way, North Side. Free. www.cityofasylumpittsburgh.org

Alki Steriopoulos grew up in Pittsburgh and went on to a career in music, notably as a conductor on Broadway and off-Broadway. But now he's written and composed his first musical, and it harks to his Pittsburgh roots: 21 recounts the often-turbulent life and tragic death of Roberto Clemente, the Pirates' Hall of Fame outfielder and humanitarian. The world premiere, staged by Point Park's Conservatory Theatre Company, is directed by veteran actor and director Richard Sabellico. Tonight's opening night for the show, which focuses on Clemente's relationship with the women in his life, including his mother, his wife and his sister Anairis. "This is not a show about baseball," Steriopoulos has said. "This is a show about love, about honor, about integrity, about respect." Bill O'Driscoll 8 p.m. Show continues through Oct. 26. Pittsburgh Playhouse, 222 Craft Ave., Oakland. $18-20. 412-392-8000 or www.pittsburghplayhouse.com

French-Canadian playwright Carole Fréchette's The Small Room at the Top of the Stairs is a modern take on Charles Perrault's folk tale "Bluebeard." The 2012 play — Off the Wall Productions's season-opener — finds Grace (Daina Michelle Griffith) drawn to the one room in their 28-room mansion that her new husband Henry (Ken Bolden) forbade her to enter. But ringing voices and curiosity beckon. Ingrid Sonnichsen directs the play's Pittsburgh premiere. DF 8 p.m. Show continues through Nov. 1. 25 W. Main Street, Carnegie. $5-35. 724-873-3576 or www.insideoffthewall.com

Looking for affordable fun for kids? Pittsburgh Musical Theater offers Tales and Treats. These Saturday-afternoon productions of classic kids' tales, targeted at ages 4-10, are performed by PMT's student actors in the group's West End theater. Today's the final performance of October's installment, Jungle Book Kids. The hour-long event includes the show, a meet-and-greet with the cast, and a treat from local businesses. And it's free for kids. BO Noon-1 p.m. 327 S. Main St., West End. Free ($3 for adults). 412-539-0900 or www.pittsburghmusicals.com

The Duhks are back. The eclectic and rootsy Winnipeg-based band comes off a two-year hiatus with three new musicians joining founder Leonard Podolak and returning vocalist Jessee Havey. New album Beyond the Blue (produced by Mike Merenda and Ruth Unger of The Mammals) furthers the group's blend of old-time, French-Canadian and Celtic music with contemporary sounds, from waltzes to Afro-Cuban rhythms The band employs everything from lap steel, fiddles and banjos to drums and electric guitars. The Duhks (say it "ducks") hit Carnegie Lecture Hall tonight courtesy of Calliope. BO 7:30 p.m. 4400 Forbes Ave., Oakland. $23-39. 412-361-1915 or www.calliopehouse.org

Among the many things Americans needlessly send to landfills, one of the most egregious is food: We reportedly discard 40 percent of the food we buy. It's especially wasteful because even food you don't eat needn't be uselessly entombed; it can become compost. (That's fertilizer, son.) Learn how decomposition can work for you — and your garden — even on a porch or in a small urban backyard, in DIY Backyard Composting. The free class at the East End Food Co-op is taught by Travis Leivo, a composting pro from Shadyside Worms. BO 6:30 p.m. 7516 Meade St., Point Breeze. Free. Reservations at 412-242-3598

RAW Pittsburgh holds its latest monthly showcase for artists in everything from visual art, film and fashion to the performing arts. Tonight, Pittsburgh's iteration of the national RAW Artists network fills Xtaza Nightclub (formerly Club Zoo) with artists displaying their creations and live music and dance on stage. It's a festival-like atmosphere; Kellee Maize hosts, and the soundtrack's by DJ duo Tracksploitation. BO 7 p.m.-midnight. 1630 Smallman St., Strip District. $15-20 (21 and up). www.rawartists.org/pittsburgh 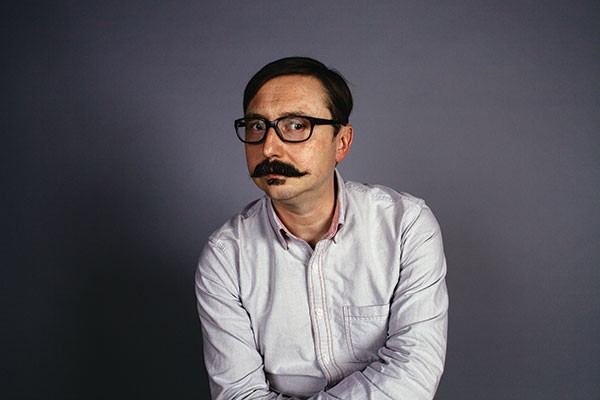 John Hodgman returns to Pittsburgh with new comedy material and the spectacles that earned him his role as "the person wearing glasses" in a number of hit TV shows. Hodgman was a New York-based journalist before he wrote a book of fabricated trivia, The Areas of My Expertise. His made-up facts earned him a spot on The Daily Show With Jon Stewart as, what else, the Resident Expert. Hodgman has also played "the PC" in a series of TV ads for Apple computers, gotten his own Netflix special and done two main-stage appearances at TED conferences. He's at the Rex Theater tonight. DF 8 p.m. 1602 E. Carson St., South Side. $25. 412-381-6811 or www.rextheater.com