Richard Blanco calls Pittsburgh “the faraway home … I’ve never been to.” Indeed, the search for home is a key theme for the 2013 inaugural poet. Born in Madrid to Cuban emigrants, Blanco grew up in Miami, and his work has been heavily colored by his family’s sense of a lost homeland. In 1998, his poetry found a home at the University of Pittsburgh Press — which also published 2012’s Looking for the Gulf Motel, the collection that preceded his surprise selection as the fifth inaugural poet, and the first to be Latino, an immigrant or openly gay. Blanco, 47, lives in Maine, but hasn’t been home much since that frigid January day. Reached by phone in Connecticut, where he’s currently teaching at Wesleyan University, he says he now spends 80 percent of his time traveling to readings at venues from hospices to the historic reopening of the U.S. embassy in Havana. On Oct. 2, the Madwomen Reading Series hosts Blanco’s first-ever Pittsburgh reading, at Carlow University. Expect poetry and readings from his 2014 memoir The Prince of Los Cocuyos. And he’ll pursue his mission as the Academy of American Poets’ first education ambassador: “I’m delighted for poetry itself as much as for my own career, just how the doors have opened up for poetry because of those seven minutes at the inauguration.” Bill O’Driscoll 7:30 p.m. Fri., Oct. 2. Antonian Hall, Carlow campus, Oakland. Free. 412-578-6346

If you’re into indie film, you’re almost guaranteed to see something you love at the touring Ann Arbor Film Festival. In its 53rd year, the Michigan-based fest’s touring program includes a rich international selection of shorts, from experimental pieces to animation, documentary and narrative work. At Pittsburgh Filmmakers’ Melwood Screening Room, the showcase is divided into two programs, each shown nightly today and tomorrow. And thanks to the Allegheny Regional Asset District’s RADical Days, all four screenings are free. BO 7 and 8:30 p.m. Also 7 and 8:30 p.m. Sat., Oct. 3. 477 Melwood Ave., Oakland. Free. www.cinema.pfpca.org

McKees Rocks’ plucky Parkway Theater is soliciting interest in three recent documentaries by offering multiple free screenings of each this weekend. Two are well-reviewed theatrical releases: The Look of Silence, Joshua Oppenheimer’s second exploration of Indonesian genocide, and Listen to Me Marlon, Stevan Riley’s look at Marlon Brando through the famed actor’s trove of personal audio recordings and visual materials. And festival favorite Alfred and Jakobine is Jonathan Howell’s attempt to document the denouement of his parents’ love story, which began with high adventure (a round-the world trip by taxicab) and ended, decades ago, in heartbreak. See the theater’s website for showtimes. BO Screenings continue through Sun., Oct. 4. 644 Broadway Ave., McKees Rocks. Free. 412-766-1668 or www.communityreelartscenter.org 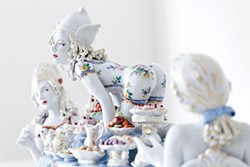 They’re saucy, these little porcelain figurines, their nipples red, flirtatiously handing each other flower petals, or crawling across tables laden with pastries. Forbidden Fruit: Chris Antemann at Meissen is the work of Antemann, an artist raised in Johnstown who since 2011 has been in residence at Germany’s Meissen, Europe’s oldest maker of porcelain. Her figurines hark to the 18th century, when porcelain was the ultimate luxury item, though her works like The Love Temple, The Pleasure Garden and Paradise Chandelier have a contemporary sensual twist. The exhibit opens today at the Frick Art & Historical Center. Bill O’Driscoll 10 a.m.-5 p.m. 7227 Reynolds St., Point Breeze. Free. www.thefrickpittsburgh.org

Get medieval with Anonymous 4 as it kickstarts Renaissance & Baroque’s 2015-16 concert season. Anonymous 4 was created out of a desire to hear what medieval chant and polyphony would sound like when sung with female voices, and its 1992 recording, An English Ladymass, was the first recording of medieval music to appear on the Billboard’s classical charts. The New York-based a capella quartet, which is celebrating its final tour, will perform pieces from more than 20 recordings at Calvary Episcopal Church. Kelechi Urama 8 p.m. 315 Shady Ave., Shadyside. $20-35. 412-361-2048 or www.rbsp.org

“We walked to the sea with a bucket / and a hand rake. We dug out our / kidneys, put them in the bucket, then / waited for rain you said the weatherman / promised. On the beach, we lay tangled like the leashes of euthanized / house pets, red trails from our bodies / tied together at points, then keeping / a passionate, rational distance.” Poet Daniel Khalastchi, a first-generation Iraqi-American who’s also Jewish, works at the University of Iowa. Tonight, at East End Book Exchange, he reads from his new collection, Tradition (McSweeney’s) along with local poet Don Wentworth. BO 7 p.m. 4754 Liberty Ave., Bloomfield. Free. www.eastendbookexchange.com 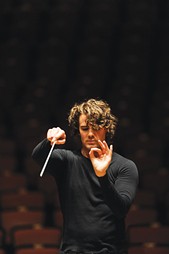 Leslie Pietryzk has published two novels, but her first story collection is particularly personal, and wrenching. This Angel on My Chest, the winner of this year’s Drue Heinz Literary Prize, is a series of 10 stories, each about a different young woman whose husband unexpectedly dies. Pietryzk, whose own husband died when she was 37, is based in Alexandria, Va. Her University of Pittsburgh Press reading and book-signing tonight is at Phipps Conservatory and Botanical Gardens, and it’s free. BO 7 p.m. 1 Schenley Drive, Oakland. Free. 412-383-2493

Yo! Suffering from Breaking Bad withdrawal? Drusky Entertainment presents a fix in the form of one superfan’s parody, One Man Breaking Bad, at Altar Bar. Los Angeles-based Actor Miles Allen plays all of the show’s iconic characters in a one-man re-enactment of the entire AMC series about a meth-dealing high school teacher. Allen got his start after his Breaking Bad impressions on YouTube garnered more than a million hits and led to sold-out runs at comedy festivals in Melbourne and Edinburgh. KU 8 p.m. 1620 Penn Ave., Strip District. $20. www.thealtarbar.com