If you haven't caught Carl Kurlander's 2008 homage to Pittsburgh, My Tale of Two Cities, at one of its many local screenings, here's a chance to do so without leaving your couch. Kurlander is the local boy turned Hollywood screenwriter and producer who returned to discover his hometown's postindustrial rebirth. Tale is admittedly a feel-good documentary. But really, what other movie boasts guest spots by Franco Harris, Cyril Wecht, Teresa Heinz Kerry, Thomas Starzl, former Treasury Secretary Paul O'Neill and Mr. McFeeley, plus a singalong of "It's a Beautiful Day in the Neighborhood"? A panel talk airing at 7:30 p.m. precedes the 2009 film's broadcast premiere, on WQED, tonight. Bill O'Driscoll 8 p.m. wqed.org

With school and day care on intermittent holiday hiatus, Carnegie Science Center offers day camps for kids ages 4-10. The first two are Science Fun Days, today and Mon., Nov. 28. Then comes a week-long round Dec. 26-30, with a variety of themes based on age. All camps include a live theater or laser show, an Omnimax movie, a science workshop and play time. The camps are full day, with half-day options for 4- and 5-year-olds, and come-early and stay-late options, for an additional fee. BO 9 a.m.-3 p.m. Camps continue through Dec. 30. $20-40 per kid daily. 412-237-1637 or CarnegieScienceCenter.org

Pittsburgh Playwrights Theatre Co. has a new home Downtown -- one block over and four blocks up from its old one -- and its first production there is the company's signature Theatre Festival in Black & White. The annual festival matches new one-act plays by white playwrights with black directors, and vice versa (though the plays themselves aren't all explicitly about race). Program A, with four works including Ray Werner's "Felled Family Tree," directed by Lonzo Green, and Kim El's "Just Fishin'," directed by Hallie Donner, premieres tonight. It rotates with Program B, which includes "Apple Says Yes," by Andre Kimo Stone Guess (best known for heading the August Wilson Center) and directed by Randy Kovitz, and F.J. Hartland's "Shaving Lessons and Half Windsor Knots," directed by Ja'Sonta Roberts-Deen. BO 8 p.m. Performances continue through Dec. 4. 937 Liberty Ave. (third floor), Downtown. $15-20. www.pghplaywrights.com 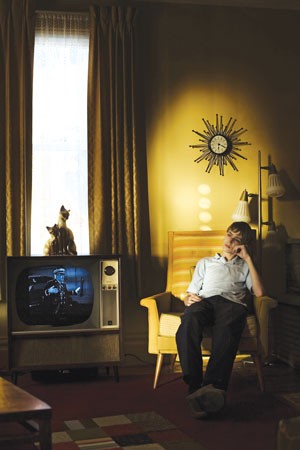 Do unbridled corporate greed, censorship and inhumane farming outrage you? Do you have filmmaking skills? The Progressive Visions Video Contest offers a chance to express your viewpoint -- and win one of two $300 awards. In the wake of its 2010 Progressive Action Video Contest -- winners included the Jasiri X music video "What If the Tea Party Was Black?" -- the Pittsburgh 14th Ward Independent Democratic Club began accepting video submissions for its next competition. Entries must address relevant and compelling topics and be no more than 15 minutes long. Register and submit video entries via email at ron@pgh14widc.org; digital copies may be physically submitted to the contest chair. The deadline is March 16. AK www.pgh14widc.org

In 1911, William Magee, mayor of a town called "hell with the lid off," created Pittsburgh's Art Commission. Urban beautification seemed a tall order here, but the commission survives. One current member is Sylvia Rohr Samaniego, an associate professor of art history at Carlow University and an expert on murals of the early 20th century. Today, the Office of Public Art (a partnership between city government and the Greater Pittsburgh Arts Council) marks the centennial with "From Smoky City to Renaissance: Pittsburgh's Art Commission and the Shaping of Urban Space and Identity," a free talk by Rohr at the David L. Lawrence Convention Center. BO 5:30 p.m. Convention Center (Room 406), Downtown. Registration required at proartstickets.org. www.publicartpittsburgh.org

Triplet sisters, abandoned by their father, are forced to find a way out of the woods; two brave separate paths and meet back where they began -- 20 years later -- with the sister who vowed to stay. Stage play This Girl Laughs, This Girl Cries, This Girl Does Nothing received the 2010 Rodney Seaborn Playwrights Award, prompting Irish-born playwright Finegan Kruckemeyer to credit young audiences in his acceptance speech: "I am committed to making strong and respectful work for children, which acknowledges them as astute audience members outside plays." The play premiered in translation, in Argentina; University of Pittsburgh Repertory Theatre presents its English-language premiere in a six-show run starting tonight, at Studio Theatre in the Cathedral of Learning. AK 8 p.m. Show continues through Dec. 4. 4200 Fifth Ave., Oakland. $8-12. 412-624-7529 or www.play.pitt.edu