In its Broadway premiere, in 2011 — even with an all-star cast led by Chris Rock — acclaimed playwright Stephen Adley Guirgis' The Motherfucker With the Hat struggled to fill seats. Guess why? Couldn't have helped that most newspapers couldn't print the show's full title, or that Rock couldn't say it on broadcast TV. And if you think Pittsburgh's barebones productions has it any fuckin' easier ... "Getting the word out about this show has been harder" than with any of barebones' prior 11 shows, says founder and artistic director Patrick Jordan. So barebones is marking its 10th anniversary with posters that — even with "fucker" blacked out — were refused from store windows, and with airtime unbought, strategic bleeps notwithstanding. Too bad, because this dark romantic comedy's premiere production drew strong reviews, and a bunch of best-play nominations. Barebones' staging at the New Hazlett Theater features Jordan as Jackie, paroled and newly sober, who suspects that his smart, coke-sniffing lover (played by Ruth Gamble) is sneaking around. Jackie's neighbor and AA sponsor, Ralph, is played by Obie winner Edwin Lee Gibson, who starred in barebones' 2012 production of Guirgis' Jesus Hopped the ‘A' Train; the cast (pictured) is directed by Rich Keitel. "There's no other name you could have called this show," contends Jordan, adding, "The title is the disclaimer." Bill O'Driscoll Thu., Nov. 21-Dec. 7. 6 Allegheny Square East, North Side. $25-35. 888-718-4253 or www.barebonesproductions.com 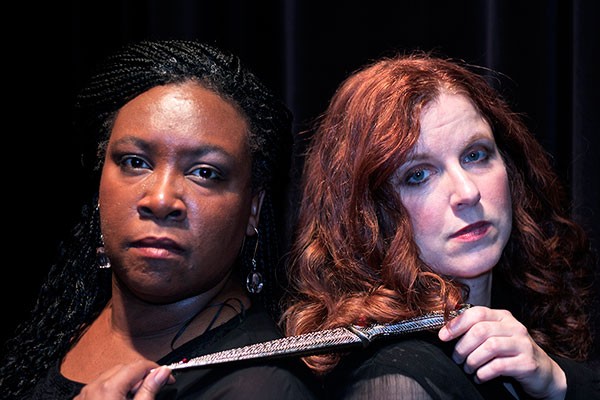 Lynne Koplitz isn't so sure how she'd be with kids. "I have this horrible image of a little kid being like, ‘Mommy, I need milk money.' And I'm like, ‘Mommy needs lipstick. Now we have a situation. ... Sorry, Selfish.'" The nationally touring comedian stars in IFC's comedy Z Rock and has numerous other TV credits, including her own Comedy Central special. Starting tonight, she does six shows at the Pittsburgh Improv. BO 7 p.m. Shows continue through Sun., Nov. 24. 166 E. Bridge St., The Waterfront, West Homestead. $15-17. 412-462-5233 or www.pittsburgh.improv.com

Whether you come for the hot chocolate, the first night of ice-skating at PPG Place or the lighting of the tree, Pittsburgh's Light Up Night is back for its 53rd holiday season. No matter where you are Downtown, something will be happening: Several blocks of Smithfield Street will be closed for a "dancing through the decades" street party; at 5:45 p.m., the Oxford Centre tree and "Santa's Lights BNY Mellon Season of Lights" will be lit; at 7:30 p.m., there's a free Pittsburgh Symphony Orchestra concert at Heinz Hall; and at 9:38 p.m., the BNY Mellon fireworks finale will be launched from the Andy Warhol Bridge. And if you like horse-and carriage-rides, then this is just getting started ... Brett Wilson Some events start as early as noon. Downtown. Free. 412-566-4190 or www.downtownpittsburgh.com

The I Made! Market indie-crafts marketplace operates year-round, moving from venue to venue. But the group's big show is its annual Holiday Market, which attracts thousands with handmade, non-mallified consumer pleasures. Today and tomorrow, in two vacant storefronts at The Waterfront, you'll find 100 local artisans selling everything from reclaimed-wood wall hangings, ceramics and jewelry to knitted goods, baby clothes, pet treats and housewares. Plus, while you browse, enjoy sounds from DJ JMalls and a DJ from Get Hip Recordings. BO 5-10 p.m. Also 11 a.m.-6 p.m. Sat., Nov. 23. West Homestead. Free entry. www.imadeitmarket.com

If there are people out there who don't dig Bob Marley ... well, you won't find them at Suite Bob, the first in a showcase-style series hosted by Reed Dance to honor legendary performing artists. Successor to the decommissioned August Wilson Center Dance Ensemble, and still led by Greer Reed, the troupe welcomes a variety of spoken-word performers, dancers and musical acts for an informal evening set to a soundtrack by the reggae master and cultural icon. Guests at the Hill District's Kaufmann Center include the reggae band Zapology. There's also an open mic, and refreshments. BO 7-10 p.m. 1835 Centre Ave., Hill District. $8. Reed.dance@gmail.com

Apparently, it's the weekend for Whose Line Is It Anyway? alums at Munhall's Carnegie Library Music Hall. Tonight, former WLIIA? host and sitcom star Drew Carey takes a break from The Price Is Right to revisit his standup roots. And then tomorrow, Colin Mouchrie and Brad Sherwood honor WLIIA?'s improv legacy with their Two Man Group show. The evening's shenanigans are based entirely on audience suggestions; in one video, the pair can be seen blindfolded, barefoot and marching across a stage filled with mousetraps, all while singing an improvised opera about lost mail, necessarily punctuated with gasps and "ows." Both Carey's gig and the Two Man Group show are all-ages. BO Carey: 8 p.m. ($30-50). Two Man Group: 8:30 p.m. Sat., Nov. 23. ($38.50). 510 E. 10th Ave., Munhall. 412-368-5225 or www.librarymusichall.com

Swing dance thrives at PittStop Lindy Hop. The weekend-long festival draws hundreds of dancers from across the country and beyond to celebrate the Lindy Hop and other vernacular dances from the 1920s through the '40s. In its 13th year, PittStop features seven dance events in three days at three distinct venues. Start out tonight at Soldiers and Sailors Memorial Hall with live music by Dr. Zoot — then go all night (1-5 a.m.) at Pittsburgh Opera with The Solomon Douglas Sextet. Other DJ and live-band dances follow through Sunday night at those venues and Carnegie Mellon's Rangos Ballroom. BO 8 p.m.-midnight and 1-5 a.m. Events continue through Sun., Nov. 24. Various venues. $10-20 (single events); $70 for whole weekend. 412-242-4562 or www.pittstoplindyhop.com

Just a guess here that when these guys call it the Pride of Our Fathers Comedy Showcase, they're being at least a little ironic. They are comedians, after all. Tommie Grant Jr., Norlex Belma, Krish Mohan, Derek Minto and Day Bracey are featured at this late-night Club Café show. Drew Rodgers hosts. BO 10:30 p.m. 56-58 S. 12th St., South Side. $8-10. 412-431-4950 or www.clubcafelive.com

Tabla music is one of the distinctive sounds of India, and University of Pittsburgh instructor Samir Chatterjee is a world-renowned tabla virtuoso who's performed with the likes of Ravi Shankar. He's also a composer. And today, his Chhandayan Tabla Orchestra performs his tabla symphony on the four stages of human life. The concert is at Bellefield Hall Auditorium. BO 2 p.m. 315 S. Bellefield Ave., Oakland. $5-30. www.music.pitt.edu

Amy Tan remains best known for her 1989 debut story collection, The Joy Luck Club (later adapted as a feature film). But her fame has only grown, and the eight-year wait since her previous novel ended with publication of The Valley of Amazement. Set in early 20th-century Shanghai, it's about a mother and daughter — an American running a high-class courtesan house and the abandoned, half-Chinese girl who herself becomes a celebrated courtesan. Glowing advance reviews in tow, Tan brings her national book tour to Carnegie Music Hall for Pittsburgh Arts & Lectures' Monday Night Lectures tonight. BO7:30 p.m. 4400 Forbes Ave., Oakland. $10-25. 412-622-8866 or www.pittsburghlectures.org