The Man Who Mistook His Wife for A Hat opera; annual Billy Strayhorn tribute; yo-yo champ visits; This Is What We Will Build When We Get Our Reparations

Typically, Quantum Theatre artistic director Karla Boos selects works to stage based on the playwright’s words. But when frequent collaborator Andres Cladera introduced her to Michael Nyman’s 1986 chamber opera The Man Who Mistook His Wife for A Hat, what enraptured her was the sound. Of the work’s deeply moving minimalist score, she says, “It has all the emotion in it,” even apart from the Christopher Rawlence libretto. That music serves as language for the listener fittingly mirrors the work’s own narrative: Based on a portion of the late neurologist and author Oliver Sacks’ eponymous 1985 nonfiction bestseller, Nyman’s opera tells the story of world-famous concert singer Dr. P, who develops visual agnosia, a condition in which his mind makes no sense of what his eyes take in. The critically acclaimed, hour-long opera has a prologue, an epilogue and just two scenes: Dr. P’s visit with his wife to see the neurologist Dr. S., and a house call by Dr. S.

Nyman, a composer perhaps best known for scoring such Peter Greenaway films as The Piano, works in a minimlist style that’s been compared to that of Philip Glass. Both sophisticated and accessible, his own music is augmented here by interpolations of compositions by Schumann, a particular favorite of the real-life Dr. P. It’s a singularly poignant approach to depict the life of a man who can perceive abstractions like music, but not reality. Bill O’Driscoll Fri., Nov. 25-Dec. 11. 200 N. Highland Ave., East Liberty. $18-51. 412-362-1713 or www.quantumtheatre.com

Nothing doing Thanksgiving night? How about some table tennis? The South Park Table Tennis Club, as usual on Thursdays, offers open play or practice. (Competitive play is saved for Tuesdays.) Post-feast, haul yourself to the South Park Home Economics Building and give it a try. All are welcome, regardless of skill level. Memberships are just $40 a year, and new members can visit three times for free. BO 7:30-9:30 p.m. 3735 Buffalo Drive, South Park Township. www.pittsburghtabletennis.com

The Winter Flower Show and Light Garden begins today at Phipps Conservatory and Botanical Gardens with a Snow Day at Phipps theme. Intended to evoke nostalgia for childhood, the display rooms depict penguins caught in a snowball fight and ice-skating reindeer, in addition to the beds of foliage, plus the sea of luminous colors in the Outdoor Garden. Visits from musical acts and Santa are planned for closer to the holidays. The show runs daily, with special extended hours, into the New Year, and the Light Garden will be open daily from 5-11 p.m. Ian Flanagan 9:30 a.m.-11 p.m. Exhibit continues through Jan. 8. 1 Schenley Drive, Oakland. $11.95-17.95. 412-622-6914 or phipps.conservatory.org 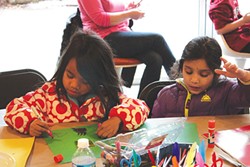 Photo courtesy of the Mattress Factory

Kids and their adults can take a fresh tack on the Mattress Factory art museum at Family Day. Today’s day-long festival includes activities inspired by artists with works now in the museum. So, for instance, build a glow-stick skyline inspired by Hans Peter Kuhn’s Acupuncture, which now tops the building, or construct a miniature world as suggested by Dennis Maher’s house-filling A Second Home. After that, enjoy face-painting, a hot-chocolate bar, music by DJ Dave Zak — and the galleries, which are also open. BO 11 a.m.-4 p.m. 500 Sampsonia Way, North Side. Free with museum admission ($15-20; free for kids 6 and under). www.mattress.org

Each year, local crafters and other vendors provide opportunities for both an alternate Black Friday and a jump on Small Business Saturday. Itinerant indie-craft marketplace I Made It! Market’s 10th annual I Made It! for the Holidays kicks off today — and continues tomorrow — at Downtown’s Heinz 57 Center. The pop-up, shop-local marketplace features 100 artists from the region offering everything from origami to jewelry, artwork to edibles, and arty T-shirts and other clothing to housewares, wooden toys and natural body-care products. There are also kids’ activities courtesy of Pittsburgh Center for the Arts; demos from TechShop; food trucks; and more. Also tonight, right next door, locally based vintage and retro clothing brand Steel City opens its own pop-up shop; this one is open daily through Dec. 24. Holiday special: Parking in Parking Authority lots and on Downtown streets is free. BO I Made It: 11 a.m.-6 p.m.; also 11 a.m.-6 p.m. Sat., Nov. 26 (623 Smithfield St.). Steel City: 11 a.m.-7 p.m. (625 Smithfield St.). Downtown. www.imadeitmarket.com

Billy Strayhorn would have turned 101 this month. The acclaimed pianist, composer and key Duke Ellington collaborator, who grew up largely in Pittsburgh, is a co-namesake of the Kelly-Strayhorn Theater, and each year the organization honors him with its Suite Life Tribute Concert. Tonight’s ninth annual concert fetes the composer of “Take the A Train” and “Lush Life” with performances by local jazz legends Roger Humphries and RH Factor, joined by two top Pittsburgh-based vocalists, Anqwenique Wingfield and Tania Grubbs. Admission is pay-what-makes-you-happy; a Suite Life Social + Benefit, supporting KST Family programming, precedes the concert. BO Benefit: 6-7:30 p.m. ($80; $130 for couples). Concert: 8 p.m. (pay what makes you happy). 5941 Penn Ave., East Liberty. 412-363-3000 or www.kelly-strayhorn.org

Tyler Severance, a world and national yo-yo champion from Delaware, is coming to Pittsburgh for a week of performances at Downtown’s S.W. Randall Toyes and Giftes. Today through Fri., Dec. 2, Severance will display his skills with various yo-yo demonstrations for elementary- and middle-school kids throughout the city, followed by daily public performances from 3-5 p.m. at the store. On Sat., Dec. 3, Severance will be part of a bigger event at S.W. Randall from noon to 3 p.m. with North American YoYo Champion Ky Zizan and National YoYo Champion John Wolfe. IF 3 p.m. Events continue through Sat., Dec. 3. 630 Smithfield St., Downtown. Free. 412-562-9252

The reparations owed to the descendants of enslaved African Americans would be enormous — but how could those resources be used to reshape a place like Pittsburgh? Architect and artist Mitch McEwen wants your input. Tonight, at Alphabet City, McEwen will lead This Is What We Will Build When We Get Our Reparations, a fast-paced, culturally conscious interactive design session that equips participants with foam, magazines, scissors, glue and more to imagine rebuilding the city to benefit communities. McEwen, who teaches at Taubman College (University of Michigan), has worked as an urban designer, and her A(n) Office was exhibited at the 2016 Venice Architecture Biennale. The event is hosted by City of Asylum. BO 6:30 p.m. 40 W. North Ave., North Side. Free, but tickets required at www.cityofasylum.org.

If you’d like someone to talk art with, Contemporary Craft has a new program for you. The Space Between is a salon-style speakers’ series in which pairs of local thinkers and doers discuss creativity in their respective fields. The theme for the first of three scheduled events is language, and the guests are art critic Alexandra Oliver and vocalist and educator Anqwenique Wingfield (pictured). An informal discussion follows, inspired by both the talks and the gallery’s current Edward Eberle Retrospective, featuring work by the famed ceramicist. Future dates, with new speakers, include Feb. 9 (“The Body”) and March 9 (“Food”). BO 6 p.m. 2100 Smallman St., Strip District. Free. 412-261-7003 or www.contemporarycraft.org

While a handful of Pittsburghers have journeyed west to physically join with the Native Americans opposing the Dakota Access Pipeline, there are other ways to support those fighting to protect the environment from this oil-industry project. Tonight’s Standing With Standing Rock — A Benefit Show for Solidarity at Howlers features sets by local rock acts including The Filthy Lowdown, Old Dream, The Bloody Seamen, Photo Joe and the Negatives, and Blue Clutch. Local art and more will be for sale at discount donation pricing; all proceeds will benefit the Standing Rock cause. BO 8 p.m.-midnight. 4509 Liberty Ave., Bloomfield. Suggested donation: $5-10. www.howlerspittsburgh.com