Artist Carolyn Pierotti went to college at age 40; graduating into the workforce in middle age was “scary,” she says. Among other things, the mother of three was told that her kids were a career hindrance, and she was subject both to sexual harassment and to gender-based deficits of accolades, credit and pay appropriate to her contributions. “I go through it all the time, and it’s insane,” she says.

In this, of course, Pierotti is not alone — not even in the arts community, where observers might expect more enlightenment. Now Pierotti has curated DIGS — Sexism in the Arts, a group show opening May 6 at Artists Image Resource. The show’s titled for the multiple “digs” from men that women artists and curators face daily. The 13 contributing artists in a variety of media include Sarika Goulatia, Christiane D., Julie Mallis, Oreen Cohen, Dawn Pogany, Staycee Pearl and Danielle Robinson.

Pierotti owns the Purple Room Fine Art consultancy, and is gallery manager at Wilkinsburg’s Percolate Art Space. She says she’s doing DIGS for her children — her 10-year-old son as much as her daughters, ages 13 and 21. Making art about an issue, after all, can have effects that simple discussion couldn’t: “Once you put it on the wall, and maybe people feel uncomfortable about that, it’s really putting the message out there,” she says.

Making your own light saber or Padwan braids? Felting your own Death Star? All that and more is possible tonight at May the 4th Be With You, a Star Wars-themed episode of the Children’s Museum of Pittsburgh after-hours MAKEnight. The sessions let 21-and-overs loose for hands-on fun in the museum’s MAKESHOP, with snacks and complimentary adult beverages. BO 6:30-9:30 p.m. 10 Children’s Way, North Side. $15-25. www.pittsburghkids.org

Fans of PICT Classic Theatre’s 2015 production of Sharon’s Grave will want to check out the play John B. Keane wrote just before it. Sive is the beloved Irish playwright’s tragic 1959 romance about an impoverished young village girl who’s sold to a rich old man for 200 pounds. The play’s Pittsburgh premiere, directed by PICT’s Alan Stanford, stars Cassidy Adkins in the title role, and its cast includes local favorites Karen Baum, Sharon Brady, James FitzGerald and Martin Giles. Tonight is the first performance at the Union Project. BO 8 p.m. Continues through May 20. 801 N. Negley Ave., Highland Park. $15-50. 41-561-6000 or www.picttheatre.org

Many will recall the big exhibit of Dale Chihuly’s botanically inspired glass art at Phipps Conservatory 10 years back. Phipps aims for another blockbuster with Super.Natural., by Seattle-based Jason Gamrath, who creates detailed likenesses of botanicals on a larger-than-life scale, some up to 14 feet tall. Forty works by Gamrath, in eight rooms, include orchids, pitcher plants, a Venus flytrap — and Phipps’ famous corpse flower, at monster scale but sans stench. The show opens tomorrow — but sneak-preview it tonight at Party in the Tropics, with a DJ, cash bar and more, free with museum admission. BO 9:30-5 p.m. 1 Schenley Drive, Oakland. $11.95-17.95 (free for kids under 2). 412-622-6914 or www.phipps.conservatory.org 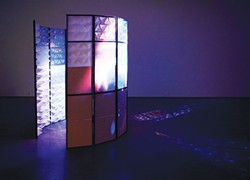 At times, Katt Williams has been known as much for his run-ins with the law as for his standup comedy and roles in films like Friday After Next. As Williams himself has acknowledged, “Any time you are standing next to Suge Knight and you are the one going to jail, that is a wake-up call for your ass.” But Williams remains on the road: His Great America Tour brings him to Heinz Hall. The show is tonight. BO 8 p.m. 600 Penn Ave., Downtown. $45.75-145.75. 412-392-4900 or www.pittsburghsymphony.org 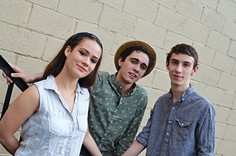 Among young-adult books with a local connection, the most popular include The Perks of Being a Wallflower, Stephen Chbosky’s 1999 best-seller informed by his experiences more than a decade earlier at Upper St. Clair High School. The popular film adaptation of the story centering on wallflower Charlie was written and directed by Chbosky and shot here. Now Prime Stage Theatre closes its season with the regional premiere of Hailey Rohn’s stage adaptation. Jeffrey M. Cordell directs; the first performance is tonight. BO 8 p.m. Continues through May 14. New Hazlett Theater, 6 Allegheny Square East, North Side. $5-25. www.primestage.com 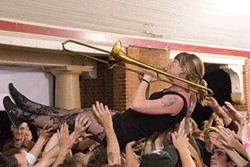 It’s music for community, music for social justice, music for fun. And plenty to eat. That’s Pittonkatonk May Day Brass BBQ & Potluck, which returns for its fourth year today. The groovy, communal all-day grassroots event hosts brass bands from around the country, from Balkan brass and activist marching bands to samba and New Orleans swing, from Oakland, Calif.’s La Misa Negra to Pittsburgh’s Drum Lines and Hard Rhymes. It’s free, with no corporate sponsorship; people spread out on the lawn of Schenley Park’s Vietnam Veterans Pavilion to chill, dance and listen. And the potluck rules. BO 1-11 p.m. Oakland. Free. www.pittonkatonk.org 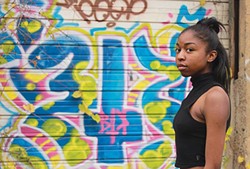 Art is a crucible of both expression and representation. Yet when it comes to seemingly simple things like finding relevant monologues for auditions, black women are often left out. The Monologue Project — happening in Pittsburgh, Los Angeles and New York City — asked writers from around the country to contribute monologues for women of the African diaspora. Today, at the Charity Randall Theatre, local professional and student actors (like Dominique Brock, pictured) gather to perform some of these original works by award-winning writers including Amy Evans, Dominique Morisseau, Charlayne Woodard, Mfoniso Udofia and Pittsburgh-based Yona Harvey. A post-show discussion ties into the Black Lives Matter movement. BO 2 p.m. 4200 Fifth Ave., Oakland. Free. RSVP to gcody@dramatistsguild.com.

Whether abstract, representational or hovering in between, the paintings of Fabrizio Gerbino glow with light. Even a stack of railroad ties has a muted effulgence. A two-day solo exhibit of this local artist’s paintings and video opens tonight with a reception at the Ryan Arts and Culture Center. BO Reception: 6-9 p.m. Also 3-6 p.m. Sun., May 7. 420 Chartiers Ave., McKees Rocks. Free. www.forstorox.org

It might not be officially spring around here until opening day for Kayak Pittsburgh. Starting today, the North Side location of this nonprofit Venture Outdoors offshoot, which rents kayaks for river jaunts, is open weekends through Memorial Day, after which daily summer hours begin. It’s easy paddling, and a great way to tour the city. BO 10 a.m.-8 p.m. Beneath the Clemente Bridge. Rates from $16 an hour for solo kayaks. www.ventureoutdoors.org 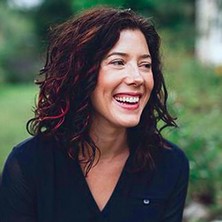