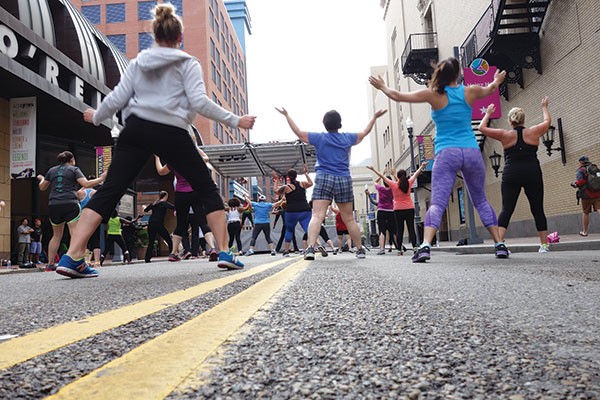 One Sunday last July, the inaugural OpenStreetsPGH closed Market Square, Sixth Street and the Clemente Bridge to cars for four hours. Offering yoga classes and dance lessons along with liberated blacktop, it drew 4,000 visitors. This year's reprise will surely beat that number: On May 31, the free Bike Pittsburgh initiative will close 3.5 miles of streets from Market Square to Lawrenceville, along the route offering activities and the chance to walk, run, bike and skate streets usually dominated by cars. (Motorists: The route will be crossable by car at 11 intersections.) In Market Square, Pittsburgh's take on the open-streets concept embraced by 100 U.S. cities includes: the long-awaited launch of the Healthy Ride Bike Share; tai chi and yoga classes; and the City Spree race (see separate Short List entry). At 8th and Penn, there'll be zumba classes, ballroom dance and more. At 23rd and Penn, in the Strip: more yoga, and dancing. And Lawrenceville's Leslie Park hosts still more yoga, an historical bike tour, fitness classes and hula-hooping. Beyond pure fun, says Bike Pittsburgh's Mike Carroll, the idea is to make public space people-friendlier, highlight neighborhood amenities and connect neighborhoods. "It's about featuring what's already here in Pittsburgh," he says. Two more Open Streets are planned this summer, on June 28 and July 26. Bill O'Driscoll 8 a.m.-noon, Sun., May 31 (rain or shine). Free. www.openstreetspgh.org

It was news to us that Barbra Streisand's Malibu estate includes a "street of shops" built in the basement. And it was such news to Jonathan Tolins that he wrote a play about it. Buyer & Cellar is Tolins' well-reviewed one-man 2013 comedy about the lone clerk who serves the superstar lone customer in her subterranean mall. Pittsburgh Public Theater stages the show's Pittsburgh premiere, directed by Don Stephenson. It stars Tom Lenk (of TV's Buffy the Vampire Slayer) as Alex More, Streisand and other characters. The first performance is tonight. BO 8 p.m. Show continues through June 28. 621 Penn Ave., Downtown. $15.75-56. 412-316-1600 or www.ppt.org

Undercroft Opera is a community-based company that since 2006 has staged the classics and more with local talent and thrifty budgets. But for its new production of Madama Butterfly, the troupe is touting not just its singers' chops, but also the lighting and costumes. The production of Puccini's classic tragedy double-casts sopranos Anna Singer and Katie Manukyan as Cio-Cio San. Tonight is the first of four performances this weekend at Carlow University's Antonian Theatre, all sung in Italian with English supertitles. BO 8 p.m. Continues through Sun., May 31. 3333 Fifth Ave., Oakland. $5-35. www.undercroftopera.org

When the recent Commonwealth Press Beer Barge dance party ended, as scheduled, at 9 p.m., and everyone went home happy, Kelly Beall and Matt Buchholz decided they were on to something. Tired (literally) of dance parties that didn't get cranking till midnight, blogger and designer Beall and artist Buchholz tonight premiere In Bed by Ten. The no-cover happy-hour dance party at Lawrenceville's brand-new Spirit Lodge is for people who have kids or who work early, or something. BO 6-9 p.m. 242 51st St., Lawrenceville. Free. 412-586-4441 or www.spiritpgh.com

As one of Pittsburgh's newer dance troupes, FireWALL Dance Theater has earned critical acclaim. But plaudits are not the same as equality, as women know all too well. FireWALL's new show, Admission, is billed as "a celebration of female empowerment" in which six dancers depict women struggling for their due "in a world full of all-boys' clubs, glass ceilings and disproportionate salaries." The choreography is by Elisa-Marie Alaio, with original music by Ryan McMasters. The first of six performances at Off the Wall Performing Arts Center is tonight. BO 8 p.m. Continues through June 6. 25 W. Main St., Carnegie. $5-25. 888-718-4253 or www.insideoffthewall.org

Image courtesy of the artist.
Art by Gohar Dashti.

Whatever your ideas about Middle Eastern identity — or about women artists from the Middle East — they'll likely be challenged by She Who Tells a Story: Women Photographers from Iran and the Arab World. This touring exhibition, organized for the Museum of Fine Arts, Boston, features more than 70 works by 12 photographers. The "visual stories" depicting contemporary life range in style from documentarian to expressionistic to surreal. Artists include Jananne Al-Ani, Gohar Dashti, Tanya Habjouqu and Rania Matar. The show opens today. BO 10 a.m.-5 p.m. Exhibit continues through Sept. 28. 4400 Forbes Ave., Oakland. $11.95-19.95 (free for kids under 3). 412-622-3131 or www.cmoa.org

Before they got famous, Andy Warhol, Philip Pearlstein and Dorothy Cantor were schoolmates studying art at Carnegie Tech, in the late 1940s; Warhol and Pearlstein later pursued their careers as roomies in Manhattan (and Pearlstein and Cantor later married). A new exhibit at The Andy Warhol Museum, including paintings and drawings from their Carnegie Tech classwork, is the first to examine these formative years. The show also includes period photos of the three, as well as a sampling of Pearlstein's most recent paintings. Pearlstein, Warhol, Cantor: From Pittsburgh to New York, co-curated by the Warhol's Jessica Beck and Matt Wrbican, opens to the public today. BO 10 a.m.-5 p.m. Exhibit continues through Sept. 6. 117 Sandusky St., North Side. $10-20. www.warhol.org

Wandering around while running a marathon would typically mean last place, but the annual City Spree can't be won without an explorer's heart. Participants create their own paths through a series of checkpoints spread across Downtown, Lawrenceville and the Strip District. Seeing as the whole point is to connect with Pittsburgh, winners are chosen based on how many places they visit within the allotted time. The event is presented by City of Play, in partnership with OpenStreetsPgh (see Free Event, above), and benefits the Community Lawns project. Joseph Peiser 8 a.m. Market Square. Pre-registration required. $25 (free with registration code "OPENSTREETSPGH"). info@cityofplay.org or www.cityspreerace.com

It's got time travel. It's got witches, vampires, an enchanted book and a quest. But novelist Deborah Harkness' All Souls Trilogy also boasts a moatful of reviews hailing the books as smart, witty page-turners that delve into history and science as well as fantasy. With final installment The Book of Life in paperback, the best-selling University of Southern California history professor is on a national reading-and-signing tour that tonight hits Shadyside Academy's Hillman Center. BO 7 p.m. 423 Fox Chapel Road, Fox Chapel. $5-20. 412-968-3040 or www.shadysideacademy.org

Released last summer, Celeste Ng's debut novel, Everything I Never Told You, was named a New York Times Notable Book for 2014. Set in 1970s Ohio, it follows the mixed-race Lee family unraveling after the mysterious death of daughter Lydia exposes a tangled web of lies and secrets. Ng, who grew up in the South Hills and Shaker Heights, Ohio, reads at the Carnegie Library Lecture Hall as part of Pittsburgh Arts & Lectures and Carnegie Library's Authors on Tour series. JP 7 p.m. 4400 Forbes Ave., Oakland. $5. 412-622-8866 or pittsburghlectures.org