A Literary Brothel for Grand Guignol; Girls Rock benefit art show at Percolate; The Guard at City Theatre; Drumline at the Benedum

Call it a lust for language: Lori Howsare, a.k.a. The Mad Muse, is starting a Literary Brothel. On arrival, guests will make the rounds of the chambers occupied by a series of Sacred Literary Whores, who’ll pleasure them with words and narrative (until, one assumes, each story climaxes). Howsare, partly inspired by poetry brothels in Pittsburgh and elsewhere, adds the twist that her inaugural production, with three shows nightly March 9-11 at a private home in Bellevue, honors Maurice Level, the French writer whose stories of the macabre were bloodily staged at the notorious Grand Guignol theaters in Paris and London in the early 20th century. Concierge Lilith DeVille (pictured) will introduce three Whores — drag artist Janet Granite, actress Katie Crandol and performer Madame D — who’ll regale visitors with tales such as Level’s “30 Hours With a Corpse.”

“I wanted to use a theatrical form that could show us human monsters,” says Howsare. Besides turning people on to literature, she says, the idea is to create empathy: “Not all monsters are born that way.” The performances will conclude in the attic, with the Mad Muse herself enacting a half-hour monologue (co-written with Stephanie Lenz) about an infamous Western Pennsylvanian: Stella Williamson, a loner who after her death was, under Southern-gothic circumstances, implicated in the murder of five infants whose bodies were later found in a trunk in Williamson’s residence. Howsare, as it happens, grew up in that same small town, Gallitzin, near Altoona. What’s more, says Howsare, “I knew Stella. She would give us cookies.” And after Stella died, “We watched them bring the trunk out of the house.

The newly opened Alphabet City Center, the bookstore/restaurant/performance space operated by City of Asylum, welcomes Ghanaian musician Osei Korankye for a one-night performance. Korankye is one of the very last remaining seperewa (Akan harp) musicians in Ghana. Once used in the traditional ceremonies of the Ashanti and Akai people, the instrument has nearly disappeared, replaced with guitars. Korankye has dedicated his life to preserving this instrument and sharing its unique sounds and history with Ghanaian and Western students. Amani Newton 8 p.m. 40 W. North Ave., North Side. Free. 412-435-1110 or www.alphabetcity.org

Set in the early 20th century and based on the 1912 novel by American writer Jean Webster, Daddy Long Legs premiered in regional theater in 2007 before migrating to London’s West End in 2012. It tells the story of orphan Jerusha Abbott and the mysterious benefactor with very long legs who agrees to send her to college, under the condition she write him once a month. These letters form the center of the two-character musical written by John Caird, with music and lyrics by Paul Gordon. Pittsburgh Public Theater’s local-premiere production, starring Danielle Bowen and Allan Snyder, has its first performance tonight. AN 8 p.m. Continues through April 9. 621 Penn Ave., Downtown. $25-62. 412-316-1600 or www.ppt.org

Arthur Lubetz has worked in Pittsburgh for a half-century, but even if you don’t know him, you know his work: His bold colors, signature geometric forms and inventively constructed spaces distinguish such landmarks as Shadyside’s Ellsworth II building; the Sharpsburg Library (pictured); Garfield’s Glass Lofts; and the renovated Carnegie Library branch in Squirrel Hill. Today, at the Carnegie Museum of Art, the Heinz Architectural Center opens Action, Ideas, Architecture: Arthur Lubetz/Front Studio, a retrospective curated by critic, historian and occasional CP contributor Charles Rosenblum. BO 10 a.m.-5 p.m. 4400 Forbes Ave., Oakland. $11.95-19.95 (free for kids under 2). 412-622-3131 or www.cmoa.org

As detailed in last week’s CP, ever since the election, Artists Image Resource has gotten busier, from its open-studio screenprinting nights to special evenings devoted to making protest art. Tonight, the North Side artspace’s open-submission, unjuried show Active Voice — A Response to the New Administration holds a reception. View this salon-style exhibition featuring work expressing anger, disdain and the need to fight back against fear, bigotry, greed and apathy. AIR promises the project will continue, but this is the perfect chance to appreciate phase one. BO 6-9 p.m. 422 Foreland St., North Side. Free. www.artistsimageresource.org

An Old Master once depicted a classical philosopher contemplating the sculpture of a legendary poet — and Rembrandt’s iconic “Aristotle With a Bust of Homer” in turn inspired Jessica Dickey’s The Guard. The 2015 drama portrays a dedicated museum guard who takes a time-bending journey after breaking the rules to physically connect with a painting. City Theatre’s Tracy Brigden directs this main-stage show by Dickey (whose The Amish Project and Charles Ives Take Me Home City previously staged). The cast features Andrew May (pictured) as both the guard Henry and Rembrandt, and includes Melinda Helfrich and Raphael Nash Thompson. The first performance is tonight. BO 5:30 p.m. Continues through April 2. 1300 Bingham St., South Side. $15-59. 412-431-2489 or www.citytheatrecompany.org

The 18-and-over event After Hours Cabaret —A Burlesque Tribute to Postmodern Jukebox promises a sexy speakeasy vibe. Burlesque dancers, belly-dancers, go-go dancers, singers and hula-hoopers perform live on the Oaks Theater stage to the prerecorded sounds of Scott Bradlee’s Postmodern Jukebox, the viral YouTube group that interprets contemporary pop hits in the style of genres including swing and big-band jazz. The show’s presented by Pin-Up Perfection Productions, and organized by Pittsburgh’s own award winning Boom Boom Bridgette, the “Buxom Beauty with the Banging Booty.” AN 7-11 p.m. 310 Allegheny River Blvd., Oakmont. $12-18. 412-828-6322 or www.theoakstheater.com

In conjunction with the exhibition Iris van Herpen: Transforming Fashion, the Carnegie Museum of Art hosts talks by designers committed to changing the way we think about fashion. This afternoon, the spotlight shines on Pittsburgh native Tereneh Mosley. In “Globalization for Good,” Mosley will discuss founding Idia’Dega: Elegant Ethical Apparel, which brings together environmentally sustainable practices with creative teams of Maasai women artisans in Kenya as equal partners in process and design. The talk is free, but registration is recommended. AN 1:30-2:30 p.m. 4400 Forbes Ave., Oakland. 412-622-3131 or www.cmoa.org

Some might say the marching bands are the actual draw to football games between historically black colleges and universities; it’s common to go to an HBCU matchup and find the stadium vibrating from 60,000 people shaking a tailfeather. Tonight only, the DRUMLine Live Worldwide Tour brings that energy to Pittsburgh at the Benedum Center. The show, featuring 45 trained musicians, dancers, singers and actors, was created by the same musical team behind the hit Nick Cannon movie of the same name. AN 7 p.m. 237 Seventh St., Downtown. $28.50-53.50. 412-456-6666 or www.trustarts.org 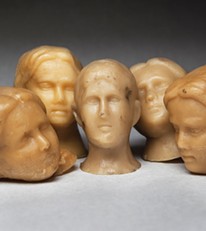 The Mattress Factory turns 40 this year. (Dahling, you don’t look a day over 29!) The North Side’s world-renowned museum of installation art is celebrating its landmark birthday with a series of events beginning with tonight’s A Walk Through the Archives. This guided tour samples archival materials — most never before publicly displayed — from installations by the likes of Damien Hirst, Ann Hamilton, Juan R. Diago and more, chosen by museum co-directors Barbara Luderowski and Michael Olijnyk and archivist Sarah Hallett. Tickets include two drinks and light appetizers. BO 6-8 p.m. 500 Sampsonia Way, North Side. $15. 412-231-3169 or www.mattresss.org