"I've grown up hunting and living off the land. There's so much going on now about knowing where your food is coming from. I think the thing with hunters is that we know exactly where our food comes from," Rebecca Lessner says about her upcoming photography exhibit at 707 Penn Gallery, Hunter Gatherer. Addressing the methodical thought that goes into the hunt, Hunter Gatherer suggests that the act of harvesting directly from the land instills a respect for it that cannot be grasped while picking over the shelves of a supermarket. With photos taken in Chesapeake Bay and York County, the exhibit depicts the process of hunting and cleaning pheasant, deer and fish, and includes repurposed deer-skull sculptures. Meanwhile, next door at 709 Penn Gallery, photographer Joey Kennedy captures the unique movements of light in everyday Pittsburgh landscapes and natural spaces. The images in Light & Landscape were crowdsourced from Kennedy's Instagram account, where many of the images featured were ones that earned the most "likes." The images that resonated most with the audience — the most popular on Instagram — were printed proportionately larger. Pittsburgh's skyline and green spaces are featured prominently. The opening receptions at both of these adjacent galleries are this Friday. Zacchiaus McKee Receptions: 5:30-8 p.m. Fri., March 6. Exhibits continue through April 12. 707 and 709 Penn Ave., Downtown. Free. 412-456-6666 or www.trustarts.org

Senior Rabbi Aaron Bisno, of Rodef Shalom Congregation, says, "Purim is the holiday on which we don masks, assume characters and behave as if we had not a care in the world." Sounds like a drag show. So that's exactly what Rodef Shalom is doing. In partnership with OUTrageous Bingo, the congregation hosts a night of cocktails, costumes, prizes, dancing and a musical drag Purim play, Queen Esther's Cabaret. The holiday celebrates the survival of the Jewish people in Persia thanks to the bravery of Queen Esther. Expect over-the-top drag queens, Jewish history and diversity. And Manischewitz. Zacchiaus McKee 7 p.m. 4905 Fifth Ave., Shadyside. $25-50. 412-621-6566 or www.rodefshalom.org 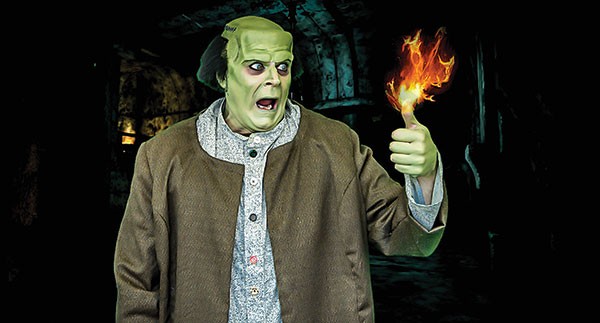 Frankenstein's monster comes alive at the Byham Theater in Mel Brooks' musical Young Frankenstein, and he breaks out into a chorus of Irving Berlin's "Puttin' on the Ritz." Based on the 1974 movie of the same name, this parody of classic horror films offers a new take on the famous story about scientist and monster. The gigantic hit has been described as "lively and a helluva good time"; Pittsburgh Musical Theater's new production features performances by Tim Hartman, Trey Compton and Lara Hayhurst. The first showing is tonight. ZM 7:30 p.m. Continues through March 15. 101 Sixth St., Downtown. $12.75-49.75 412-456-6666 or www.pittsburghmusicals.com

Almost certainly, the violence faced by women in campus settings (and indeed, everywhere) is vastly underreported, not least because many victims themselves fear speaking up. Snowflakes in the Cemetery is a new dance/installation work addressing such issues. It's a collaboration between two Carnegie Mellon students — writer and composer Theo Teris and video artist MacKenzie Bates — and Bodiography Contemporary Ballet, choreographed by Bodiography's Maria Caruso. The show, subtitled "A Journey into Womanhood That Turns into a Testament of Survival," is performed tonight and tomorrow night at CMU's Kresge Hall. Bill O'Driscoll 7:30 p.m. Also 7:30 p.m. Sat., March 7. CMU campus, Oakland. Free. www.snowflakesballet.com

While Pittsburgh-based indie publisher Autumn House Press has branched into fiction and essays, it made its name with poetry. It continues staking that claim with the third edition of its Autumn House Anthology of Contemporary American Poetry. Many of the 106 poets whose work is included are locally based. Several of them read tonight at a free book-release event in Chatham University's Mellon Board Room. Among the poets: Jan Beatty, Ed Ochester, Sheryl St. Germain, Patricia Jabbeh Wesley and Michael Wurster. BO 7:30 p.m. Chatham campus, Shadyside. Free. www.autumnhousepress.org

Heavy metal, bodily functions, nerd culture: These are some of Brian Posehn's talking points. "Being a nerd, I know how to make other nerds mad, and that's getting their obsession wrong," he says in one bit, recounting the time he yelled, "Star Trek sucks!" at Star Wars fans lined up to see Attack of the Clones: "I'm sitting in the car going, ‘Ha ha, nerds!' and I've got a stack of comic books in the passenger seat." The comedian — known for his roles on Mr. Show and The Sarah Silverman Program — appears tonight at the Rex Theater. Margaret Welsh 8 p.m. 1602 E. Carson St., South Side. $25-30. 412-381-6811 or www.rextheater.com

Subtlety is the hallmark of paintings by Fabrizio Gerbino. The Italian-born, Pittsburgh-based artist's mostly abstract compositions in muted colors have been exhibited internationally and at area showcases including the Pittsburgh Biennial and The Andy Warhol Museum exhibit Factory Direct. Tonight, a show featuring a dozen of Gerbino's latest works opens with a reception at Galerie Werner, located inside Shadyside's Mansions on Fifth. BO 5-8 p.m. Exhibit continues through May. 5150 Fifth Ave., Shadyside. Free. RSVP at 412-716-1390 or info@galeriewerner.net.

In a powerhouse double billing, Manchester Craftsmen's Guild Jazz presents jazz legend Kenny Barron and vocalist Cyrille Aimee. A National Endowment for the Arts Jazz Master and Grammy nominee, Barron is a solo pianist and jazz traditionalist whom popmatters.com ranks "among jazz's greatest pianists." Aimee (pictured) is a French singer who covers everything from Grover Washington's "Just the Two of Us" to Michael Jackson's "Wanna Be Startin' Somethin'." Each artist does two sets tonight. ZM 6 and 8:30 p.m. 1815 Metropolitan St., North Side. $49.50-55. 412-323-4000 or www.mcgjazz.org

Leslie Minnis offers a fresh take on the graphic novel. The Pittsburgh-based artist's Echoroad is a set of five comic books comprising a single graphic novel, one for each of the five main characters. In the story's future fantasy world, memories have become tangible objects. Minnis (who also co-wrote the book with Andrew States) plots the panels as irregular shapes that flow together to show the whole story at once, like a narrative mosaic. The book's release party, tonight at The Gallery 4, opens an exhibit of her work. BO 7-11 p.m. Exhibit continues through March 28. 206 S. Highland Ave., Shadyside. Free. 412-363-5050 or www.thegallery4.us

A new open-mic night for poetry launches tonight. Po'it Up takes place at the venerable Homewood Coliseum, a former roller rink repurposed as an arts and events venue. Po'it Up is hosted by Hotep the Artist, who says the evening's themes will range from "Love Jones" to "World Changing Words." Featured artists are TBA; your ticket includes food and wine. BO 8 p.m. 7310 Frankstown Ave., Homewood. $15. 412-853-3382

With the weather at last starting to break, it's time to get outside again. Venture Outdoors has been active all winter, mind you, but the group won't mind if your first jaunt of the year is today's Raccoon Creek Long Distance Hike. Fit hikers (and even dogs that can match the pace) are welcome on this day-long, guided outing covering  some 10 miles of challenging trails in this state park located west of Greater Pittsburgh International Airport. BO 10 a.m.-4:30 p.m. Hookstown. $12. www.ventureoutdoors.org

Time and materiality can be fickle and transient, but these concepts also inspired the latest exhibition at Spinning Plate Gallery. Featuring artwork from Pittsburgh-based artists Michelle Browne, Camilla Brent Pearce and Laura Tabakman, the show of mixed-media work reflects on the passage of time. Browne incorporates rusting, printmaking and painting on a variety of fabrics. Pearce focuses on found objects, and Tabakman's jewelry and sculptures use fiber and organic polymer clay. Meet the artists at today's opening reception for Time and Materiality. ZM 3-6 p.m. Exhibit continues through March 27. 5821 Baum Blvd., Friendship. Free. time.materiality@gmail.com