Almost everyplace has its refugees. But unlike the more privileged immigrants whom cities like Pittsburgh are recruiting, those fleeing political or economic strife are typically voiceless. LOST/FOUND: Finding Refuge in Pittsburgh is a new stage work that gives some local refugees not only a microphone, but also actors, a brass band and a stomping beat. This City of Asylum/Pittsburgh-produced project enlists the Czech Republic's Archa Theatre collective and its Allstar Refugee Band. In recent weeks, an Iraqi engineer, a family from the Democratic Republic of Congo, and refugees from Nepal and Bhutan shared their stories; Archa's Jana Svobodová and Phillipp Schenker devised ways to stage them; and the Allstar Refugee Band and bandleader Michael Romanyshyn composed original music. On June 28 and 29, audiences will convene at COAP's Alphabet City tent, then walk to four nearby venues for each 20-minute telling. An Allstar Refugee concert follows, with local musicians joining the group's eclectic mix of members from Kurdistan, China and beyond, and its equally hybridized music. LOST/FOUND is all about making the politics behind refugees personal. "It doesn't work if people are just told about the political reasons ... it does not touch people at all," says Svobodová. But through storytelling, "suddenly you find you can identify with the person as an audience." Bill O'Driscoll 6 p.m. Sat., June 28, and 6 p.m. Sun., June 29. 318 Sampsonia Way, North Side. Free; reservations recommended at cityofasylumpittsburgh.org/events.

"Concepts interest me," writes Dean Moss in an online profile. "Imagery interests me. Activities of falling involve me. I like to do all, all at once." The veteran award-winning, Brooklyn-based choreographer visits Pittsburgh with a work in progress courtesy of the Kelly-Strayhorn Theater's Community Residency Program. johnbrown is Dean Moss/Gamophyte Inc.'s interdisciplinary work exploring the still-controversial legacy of the radical abolitionist of Harper's Ferry fame. The show will premiere this fall, at New York City's The Kitchen. BO 8 p.m. 5931 Penn Ave., East Liberty. Admission is pay-what-you-can. 412-363-3000 or www.kelly-strayhorn.org

One of Pittsburgh's longest-running arts institutions teams with one of the newest. About 40 area artists — including Patricia Barefoot, Claire Hardy, Christopher Ruane and Bob Ziller — have contributed to the latest Associated Artists of Pittsburgh group show, curated by the 114-year-old group's Scott Hunter. The venue is Most Wanted Fine Art at the Waterfront, a new-this-spring offshoot of its Garfield parent gallery. The opening reception is tonight. BO 6 p.m. 149 W. Bridge St., West Homestead. Free. www.aapgh.org

Alongside the Carnegie Museum of Art's exhibit of baroque prints, a new exhibit opens today. Faked, Forgotten, Found documents the scientific analysis and conservation of five alleged Renaissance paintings from the museum's collection. They include a 16th-century portrait of Florentine noble Isabella de Medici (pictured), which was painted over during the Victorian era. By tracing the life of this painting and others, the exhibit showcases modern restoration technology, and provides historical context for both the original and revised paintings. DW 10 a.m.-5 p.m. Exhibit continues through Sept. 15. 4400 Forbes Ave., Oakland. $11.95-17.95. 412-622-3131 or www.cmoa.org

Want to know more about male strippers? La Bare is a new doc about the titular strip club in Dallas, directed by Mount Lebanon's own Joe Manganiello (who portrayed "Big Dick Richie" in Magic Mike). In La Bare — whose Hollywood Theater run starts tonight — you'll go onstage and off with mancake including "The Chef," "The Aerialist" and "The Crowd Pleaser." On Fri., June 27, Manganiello will attend a fundraising party at Ivy, in the Strip District ($20; proceeds benefit the Hollywood and Denis theaters). Al Hoff Film: 9:15 p.m.; also 2 p.m. Sun., June 29; 7:30 p.m. Wed., July 2; and July 4 weekend. 1449 Potomac Ave., Dormont. $8. 412-563-0368 or www.thehollywooddormont.org

If you've been to the Carnegie Science Center, chances are you've seen its Cold War-era submarine, the USS Requin. But starting today, and on select Sunday mornings this summer, visitors on guided Tech Tours can get special access, going behind the scenes to better understand the vessel's history, science and engineering. The sub's unrestored compartments, conning tower and periscope will all be accessible, with Science Center staff and a submarine veteran on hand. Self-guided tours of the rest of the submarine are also available daily. DW 9-11:30 a.m. Also July 13 and 27; Aug. 10 and 31; and Sept. 14. 1 Allegheny Ave., North Side. $15-20. 412-237-3400 or www.carnegiesciencecenter.org

Pittsburgh Center for the Arts' sixth annual yART sale has some new twists —including flames. The fundraiser, held on the big Fifth Avenue building's lawn, lets local artists sell affordable artworks, equipment and supplies, from ceramics to art books, and this year including photos by Kelly Bogel from her fine recent Ghost Signs exhibition. New at yART is a live 3 p.m. performance by singer-songwriter Joy Ike. Then there's Burn, a show and sale by watercolorist Kathleen Zimbicki. She celebrates her 80th birthday by steeply discounting her paintings — and by offering a selection of $8 paintings that, if not sold, will be burned in an onsite kiln starting at 1 p.m. BO 10 a.m.-4 p.m. 6300 Fifth Ave., Shadyside. Free. 412-361-0873 or www.pittsburgharts.org 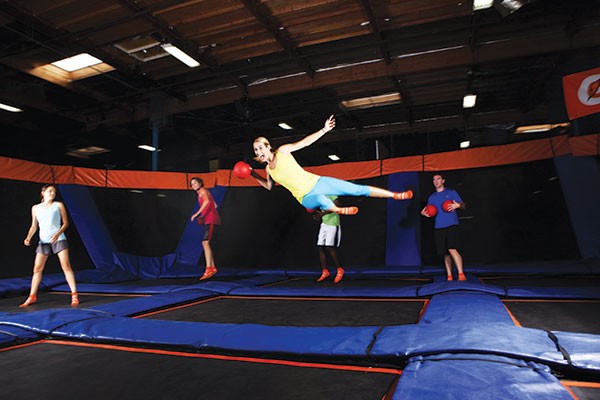 Ultimate Dodgeball is an up-and-coming extreme sport that takes the perennial playground activity and incorporates the added insanity of trampolines. Sound interesting? Well, the SkyZone Indoor Trampoline Park, in Leetsdale, is closing off its unique wall-to-wall trampoline court tonight for the Pittsburgh qualifier round of the national Ultimate Dodgeball Championship. The grand championship in Las Vegas will award $50,000 in cash prizes. Teams can register for $50 at UDodgeball.com DW 7 p.m. 740 Brickworks Drive, Leetsdale. $50 per team. 724-251-6100 or www.skyzone.com

Enough corporations lately claim to be green that they've exhausted all stock art of drops of water on leaves, and hands cupping seedlings. But if you suspect such ads unhelpfully narrow the environmental conversation, tonight's Big Idea Bookstore event is for you. The co-operative's Radicalism 101 discussion series continues with Against Green Capitalism, a presentation facilitated by local scholar Lars Peterson. Suggested readings include Bob Black's "The Abolition of Work" and Janice Peck's "The Oprah Effect: The Ideological Work of Neo-liberalism." BO 7 p.m. 4812 Liberty Ave., Bloomfield. Free. 412-687-4323