What better way for Attack Theatre to kick off its year-long community dance project Remainder/Northside than with a free, family-friendly community day at the New Hazlett Theater? On Sun., June 22, the Pittsburgh-based, internationally touring troupe will launch the project and entertain audiences as only Attack Theatre can, with interactive movement activities, mini-performances, and games including life-size chess, Four-Square and Bag Attack Boogaloo. "We have had a longstanding relationship with the North Side, performing at the New Hazlett, The Andy Warhol Museum, the Children's Museum, and teaching in its schools," says Attack managing artistic director Michele de la Reza. "We wondered what it would be like to cultivate a more personal relationship with the residents of its 17 neighborhoods, listening to their stories and creating a work around those experiences." The project builds on prior Attack Theatre community programs, such as Some Assembly Required and improvised performances at the Carnegie Museum of Art's 2008 Carnegie International. "We are not looking to create a dance documentary of the North Side," says de la Reza. "We are more interested in creating passionate portrayals of everyday life." Two work-in-progress showings, in November and in February, preface the project's final performance at the New Hazlett, next June. Steve Sucato Noon, Sun., June 22. 6 Allegheny Square East, North Side. Free. 412-320-4610 or www.attacktheatre.com 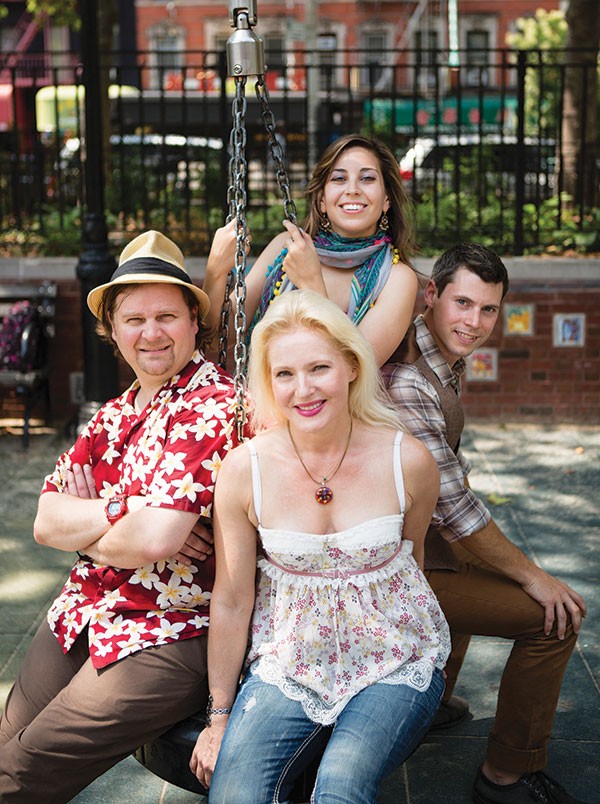 The Voyager spacecraft, with their golden records of images and sounds from Earth, are as far from this planet as any manmade object's gotten, and they're pretty high-tech. The Pillow Project's new show, inspired by the "human signature" on those records and Carl Sagan's classic TV series Cosmos, is both relatively low-tech and much closer to home. A Pale Blue Jazz features dancers Beth Ratas and Joshua Manculich and original music. Five days of late-night performances at The Space Upstairs are launched tonight. BO 10 p.m. Continues through Mon., June 23. 214 N. Lexington St., Point Breeze. $10-15. www.pillowproject.org

Composer Michael Ching's Speed Dating Tonight is a one-act 2013 comic opera set in a bar on speed-date night. Microscopic Opera's Pennsylvania-premiere production — staged in a private Shadyside garden costumed as a bar — is also the premiere of Ching's full, small-group orchestration for the piece. While this isn't participatory theater, it does seat audiences of up to 50 at café tables, and has them change tables when the bell rings, just like the singers will. Tickets include complimentary beverages and light snacks; the first of six performances is tonight. BO 7 p.m. Continues through June 29. 5 Shadyside Lane, Shadyside. $40. 412-580-9267 or www.microscopicopera.org

Veteran local comic Gab Bonesso calls tonight's Comedy for the People show "The Cheap Date Factory." Actually, no dates (or figs) are involved — unless they're in the sauce at Union Pig & Chicken, the downstairs neighbor of Harvard & Highland. That's the venue where Bonesso will headline, with WDVE's Sean Collier as the featured comic, and host Jason Clark. But ordering any food or drink is truly optional — you can come just for laughs. BO 9 p.m. 220 N. Highland Ave., East Liberty. Free. 412-363-7675 or www.sousapgh.com

Families can kick off summer today with the Children's Museum of Pittsburgh's Community Day. Not only is the museum free and open for the public all day, but it's also brought in special summery treats like wading pools, sprinklers, art-activity tents and performances by the Pittsburgh Banjo Club. The museum itself has plenty to offer, too, like a Fred Rogers exhibit, a workshop for Eric Carle-style tissue collage, and its long-running exhibit XOXO, which explores themes of love and forgiveness through interactive multimedia art. DW 10 a.m.-5 p.m. 10 Children's Way, North Side. Free. 412-322-5058 or www.pittsburghkids.org

Today and tomorrow, a Fort Pitt Museum living-history program explores the importance of artillery in 18th-century warfare. And that means the cannons are going off. During Artillery at the Forks, the museum's replica Revolutionary War-era cannon, which requires a six-person crew, will be fired at select times throughout the day, alongside various military artifacts, life-like figurines and a featured exhibit about the 1763 siege of Pittsburgh and the 1947 Hollywood film thereof. DW 10 a.m.-5 p.m. Also 10 a.m.-5 p.m. Sun., June 22. 601 Commonwealth Place, Downtown. $6. 412-471-1764 or www.heinzhistorycenter.org

Pittsburgh's had screening series for years, but never the sort of full-time boutique cinema pioneered in the '90s by Austin, Texas's Alamo Drafthouse. That changes tonight with the grand opening of Row House Cinema. The 83-seat Lawrenceville venue occupies the old Star Discount Store, courtesy of developer Brian Mendelssohn. It plans a repertory program focusing on older film, says Row House general manager Geoff Sanderson, with themed weekly programs ranging in time from silent cinema through French New Wave, Kubrick and even '80s action cheese. (That also makes Row House Pittsburgh's first full-time rep house since the venerable Pittsburgh Playhouse series ended, way back when.) Though compact in size, Row House boasts digital projection, stadium seating — they took some floor out — and a beer shop. (Yes, you can take drafts or bottles into the theater.) The grand opening features a single screening of Pulp Fiction, but if you can't make it, Tarantino's cultural touchstone runs for a week, part of a first-week repertory that includes Trainspotting. BO 8 p.m. 4115 Butler St., Lawrenceville. $5-9. 412-904-3225 or www.rowhousecinema.com

Deena Mendlowitz is living proof that laughter is the best medicine. Funnel Cakes Not Included, her series of darkly comic monologues about living with suicidal depression, premieres locally tonight at Arcade Comedy Theater. After honing her improv chops with Chicago's Second City, Mendlowitz moved to Cleveland, where she founded the troupe This Improvised Life (which opens both showings of Funnel Cakes tonight), and debuted Funnel Cakes to a sold-out crowd. She brings the harsh yet uplifting show to Pittsburgh for one night only. DW 8 and 10 p.m. 811 Liberty Ave., Downtown. $5-10. 412-339-0608 or arcadecomedytheater.com