In 2011, GQ named Pittsburgh the "third worst-dressed city in America." Gil Mansfield wrote, "There is no city on Earth that can equal the utter sloppiness of Pittsburgh." Wadria Taylor, founder and CEO of event-planning company Style & Steel, agrees: She's tired of seeing Pittsburghers in their pajamas. But where GQ sees a bunch of hopeless slobs, Taylor discerns potential. She insists the city houses hordes of style geniuses, from designers to makeup artists. But she fears that unless Pittsburgh gets its act together, that talent will leave. This summer, Taylor hopes to help cultivate Pittsburgh's style renaissance. She has spent the past four months organizing the inaugural Style Week Pittsburgh, which kicks off Aug. 7 with a champagne-cocktail launch party at Downtown's Perlé lounge. This five-day affair is distinct from the upcoming Pittsburgh Fashion Week, which is filled with fashion shows and focused on clothes and accessories. Style Week includes only one fashion show, which will take a retrospective look at style, starting in the 1970s. (Some proceeds will benefit Gwen's Girls, a local charity.) Style Week also includes the Superwoman in Heels Style Awards, which is a style networking party at the Pittsburgh Urban Winery; a Beauty Boot Camp event at LaLa's Salon; and a free boutique crawl. Olivia Lammel Wed., Aug. 7-Aug. 11. All-access: $70 (regular)-$125 (VIP); individual events start at $10. www.styleandsteel.net or 412-208-0249

Image courtesy of the artist.
Art by Scott Goldsmith.

If it seems like just last week we were telling you about the Rivers of Steel National Heritage Area's seasonal tours of the Carrie Blast Furnaces, well, we were. But the hits just keep coming for this long-decommissioned industrial site in Rankin, now well into its second act as a National Historic Landmark, tourist destination, movie set … and installation-art site for a giant found-object deer-head sculpture. Add to that list "photographer's playground": The latest tribute is Carrie Furnaces: Contemporary Views, a Silver Eye Center for Photography exhibition of 51 photographs by 32 artists. The images were culled from an open call that drew 332 photographs. The show, co-presented with Rivers of Steel, opens with tonight's reception. Bill O'Driscoll 6-8 p.m. 1015 E. Carson St., South Side. Free. 412-431-1810 or www.silvereye.org

If you love art, there'll probably be something you dig at this month's Penn Avenue gallery crawl Unblurred. Garfield Artworks hosts the launch of If Not You, Then Who?, the fourth in local author Tricia Klinkhamer's "You = Love" kids'-book series (illustrated by Dean Anthony Cercone Jr.), with live music and coloring activities. At the Irma Freeman Center for Imagination, there's Automata, A Kinetic Art Show, in which artists from across the country offer art with moving parts, including hands-on activities and live music by BurnOut WarCry and Mike Tamburo. (A work by T.R. Reed is pictured.) Artisan has paintings by tattoo artist Nathan Mould. And don't forget What If Airplanes Were Lawnmowers?, a mixed-media, found-materials show at Studio 5013; Ex Libris, a show of book-themed paper-cuts, sculptures and other book-themed art at Most Wanted Fine Art; late night's Habeas Corpus tango-dancing at the law office of Richard J. Walters; and more. BO Most venues open by 7 p.m. 4100-5500 Penn Ave., Bloomfield/Garfield/Friendship. Free. 412-389-5521

Not content to have just closed a rock musical comedy about defeating fascism, No Name Players are ready to delve, well, rather deeper into Western history. In Oedipus and the Foul Mess in Thebes, playwright Sean Graney weaves together the whole of the Oedipus saga as told by Aeschylus, Sophocles and Euripides. Graney, a noted specialist in adapting Greek tragedies, is founding director of acclaimed Chicago-based troupe The Hypocrites. This world-premiere production, which opens tonight, is directed by Pittsburgh native Steven Wilson, a frequent collaborator of Graney's. The all-Pittsburgh cast includes Todd Betker, Tressa Glover and Ricardo Vila-Roger. BO 8 p.m. Continues through Aug. 17. Off the Wall Theater, 25 W. Main St., Carnegie. $15. www.nonameplayers.org 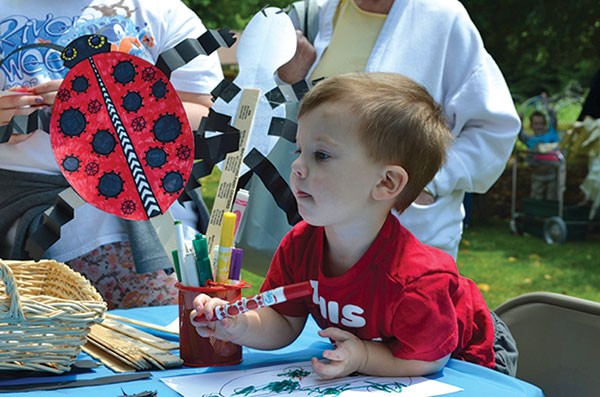 "Blocks, Bricks and Boulevards" is the title of this weekend's Frick Family Fun Day. Today, children will collaborate to build a city, using only cardboard boxes, paint and paper. Of course, they will have to leave their cardboard creations on the lawn of the Frick Art & Historical Center, but each kid will get a chance to make a collapsible paper cityscape to take home. Croquet, beanbag-toss and other games will provide an outlet for the kids' inevitable pent-up artistic frustrations. OL 11 a.m.-4 p.m. 7227 Reynolds St., Point Breeze. Free. 412-371-0600 or thefrickpittsburgh.org

The settings are like this: a jumble of random music instruments, a tumble-down fireplace, a mosaic fish, a saw; or else tree limbs bearing lockboxes, sprouting from wallpaper printed with labyrinths. And each scene is inhabited by a young woman. Such are the oil paintings of Denver, Colo.-based artist Leslie Minnis, whose new works are featured in the exhibit Ghost Feeding Arena. Minnis is a veteran of the video-game industry, where she's worked as a concept artist. She's now re-exploring her fine-art roots, and working on a graphic novel, a psychological thriller titled Echoroad. Presumably it has the same "themes of identity, the unconscious, monstrosity, object relations, dreams and the surreal" she posits for this Gallery 4 exhibit, which features paintings inspired by sets Minnis built with painted objects she assembled from found materials. The opening reception is tonight. BO 7-11 p.m. Exhibit continues through Aug. 24. 206 S. Highland Ave., Shadyside. Free. 412-363-5050 or www.thegallery4.us

Likely this is saucier fare than you're used to at the Cabaret at Theater Square — but the joint is, after all, called a "cabaret." So catch the debut run of Burlesque: The Introduction. The six-member troupe includes five women in spangly (and typically scanty) attire, performing a burlesque-style dance review that strives to combine the old-school with the new. The show, from locally based RED Productions, promises to "make you want to get up and dance." BO 10:30 p.m. $10 (21-and-over only); free to ticket-holders for earlier Cultural District shows. 412-456-6666 or www.trustarts.org

More and more, corporations are implanting genes from one creature into another — think tomatoes with fish DNA — and claiming it improves the food supply. And more and more, activists warn that genetically modified organisms mean more pesticides in the environment, and more risks for humans, on whom the long-term effects of eating GMOs are unknown. Among other things, activists are fighting to require state government or the feds to label GMO foods, as they do in Japan, Brazil and even China. Such labeling is the goal of the otherwise light-hearted Are We Eating Fishy Food Tour, which involves five art cars roof-mounted with spoofy versions of GMOs, including a giant hybrid corncob/fish. Two days into this 11-day cross-country trip from Washington, D.C., to Seattle, The Fishy Food Tour tailgates at tonight's Pirates game. Look for these scary (or are they more on the cute side?) cars starting at 5 p.m. BO www.AreWeEatingFishyFood.com

There are no clowns or bedazzled elephants in the Crescent Circus. Like many neo-circuses, Morgan Tsu-Raun and Nathan Kepner, a duo from New Orleans, have modified the sparkly, spectacle-filled big-top tradition. They've kept the acrobatics and juggling, but have added more humor, audience participation and magic tricks. They have performed at colleges and corporations, for audiences in Las Vegas and London. Tonight, they give a one-night performance at Zelienople's Strand Theater. OL 7:30 p.m. 119 N. Main St., Zelienople. $17-22 (kids under 12: $10-15). 724-742-0400 or thestrandtheater.org