Endless road construction be damned — up on Penn Avenue, they're still opening new art galleries. The latest technically isn't brand-new: BOOM Concepts has already hosted several events, including an art show, a fashion show and the Rhinestone Steel Queer vaudeville night. But this week is its official debut in the long-vacant storefront at 5139 Penn Ave., which houses Magic Organs (e.g., artists D.S. Kinsel, who's pictured, and Julie Mallis) and online youth-lifestyle publication JENESIS Magazine. BOOM plans diverse programming, from exhibits to community classes on everything from business and technology to health and politics. On July 3 and 4, BOOM joins a bustling, if still partially blockaded, Unblurred for a special two-day holiday-week gallery crawl. This Thursday, BOOM holds studio tours and an art exhibit; on Friday, a 6-11 p.m. open house includes live music, free massages and an outdoor fundraiser barbecue. Elsewhere on Penn, some Unblurred venues are open both evenings, some only one day or the other. Highlights include Rust Belt Rivalry, an annual group show and exchange with Cleveland's Waterloo Arts Festival, at Garfield Artworks (open both days) and Friday's Fourth of Ju Luau, at Artisan, including a pig roast (really). And on Friday, don't miss the crafters and food vendors at the Garfield Night Market. Bill O'Driscoll Thu., July 3, and Fri., July 4. 4100-5400 Penn Ave., Bloomfield/Garfield/Friendship. Times and dates vary by venue. Most venues are free. www.pennavenue.org.

Just like it says in the Constitution, July 4 is all about free entertainment. And if you're anywhere near the Point today, you're covered. The EQT Pittsburgh Three Rivers Regatta runs one more day, starting at noon, with its temporary beach, boat races, Anything That Floats contest and live music from the likes of No Bad JuJu (funk) and The Granati Brothers (rock). At 2 p.m., the Steelers kick off the Heinz Field Fourth of July Celebration, including free admission to the Steelers Experience exhibit and more live music. (The all-country lineup includes The Stickers and Jerrod Niemann.) And that's about it — oh, except for the big, inevitable Zambelli Fireworks show at 9:30 p.m., which you can watch, also for free, from countless vantage points near and far. Bill O'Driscoll Regatta: www.threeriversregatta.net. Heinz Field: www.steelers.com 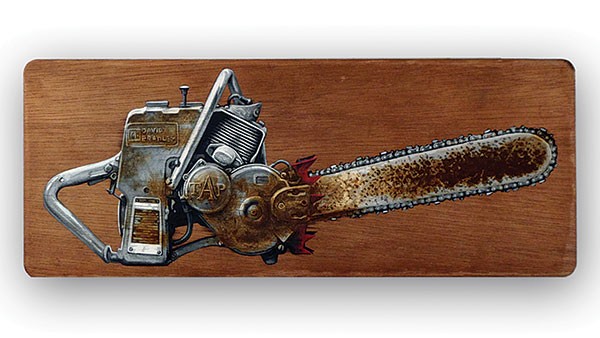 Anthony Purcell's Chainsaw Show comprises a series of painstakingly detailed paintings of vintage chainsaws — rendered on hunks of wood rough-cut by power tools similar to the ones whose portraits they bear. The exhibit of new work is at The Gallery 4, where the locally based Purcell is a favorite for offerings 2011's Wunderball and 2012's The Sepia Show. The new show's formal opening reception is actually on July 12, but you can see the art itself starting this afternoon. BO 1-8 p.m. 206 S. Highland Ave., Shadyside. 412-363-5050 or www.thegallery4.us

"I went down a YouTube wormhole," says Kasey Daley, explaining how she conceived of The Orson Welles 1978 4th of July Spectacular. Tonight's live show imagines the great filmmaker, late in life and having spent his earnings from hawking Paul Masson wine — see the ads, and piteous outtakes, online — hosting what proves to be "the worst variety show ever for a major network." Daley says the partly improvised show at Steel City Improv Theater features a cast of 10 SCIT regulars, including Justin Zell as Welles. Expect period-appropriate celebrity impressions and, one imagines, a certain air of comic pathos. BO 8 p.m. 5950 Ellsworth Ave., Shadyside. $5. 412-404-2695 or www.steelcityimprov.com

Everybody around here knows about McConnells Mill State Park — situated around scenic Slippery Rock Creek Gorge, about 40 miles north of town — but here's betting that you haven't been there in a while. Today's Waterfall Hike is a perfect excuse to catch up. The guided, day-long Venture Outdoors trek traverses seven miles of trails, taking in the falls themselves and whitewater rapids. The terrain ranges from easy to difficult, and your guide will contribute a little history, such as tales of the park's namesake 18th-century grist mill. BO10 a.m.-4 p.m. 2697 McConnells Mill Road, Portersville. $12. 412-255-0564 or www.ventureoutdoors.org

For a Yank, Susan Elia MacNeal has done pretty well for herself writing about wartime England. MacNeal — who grew up in Buffalo, N.Y., and went to Wellesley College — published her debut novel, Mr. Churchill's Secretary, in 2012. That was quickly followed by Princess Elizabeth's Spy and His Majesty's Hope, the next two entries in her series centering on Maggie Hope, an American spy and code-breaker in 1940s England. The award-winning MacNeal's in town with her new one, The Prime Minister's Secret Agent. Tonight's Mystery Lovers Bookshop event includes a dinner. BO 6:30 p.m. 514 Allegheny River Blvd., Oakmont. $25. 412-828-4877 or www.mysterylovers.com

We've had heavy-metal yoga in these parts, but here's a new one: yoga and live jazz. Jazz Is Balance is an evening class at Manchester Craftsmen's Guild, led by local vinyasa yoga teacher LA Finfinger. Call it hep cats and down dogs: The 75-minute session for practitioners from beginners on up is done to live music by a band led by bassist Paco Mahone, himself a Bikram yoga teacher. Well, if you can dance to it, why not? BO 6 p.m. 1815 Metropolitan St., North Side. $30. 412-322-0800 or www.mcgjazz.org

Few directors have had a greater impact on the medium than the maker of Dr. Strangelove, 2001: A Space Odyssey and A Clockwork Orange. But in 1953, Stanley Kubrick was a 25-year-old former Look magazine staff photographer and aspiring filmmaker from the Bronx, making his first feature-length film with money borrowed from friends and relatives. Tonight, the Hollywood Theater launches its year-long, chronological Kubrick retrospective with the rarely screened Fear and Desire, a drama about four soldiers trapped behind enemy lines. Kubrick's 62-minute debut feature stars future Hollywood name Paul Mazurky, with a script by future Pulitzer-winner Howard Sackler. The series continues in August with 1955's Killer's Kiss. BO 7 p.m. Also 7 p.m. Sun., July 13. 1449 Potomac Ave., Dormont. $6-8. 412-563-0368 or www.thehollywooddormont.org

Ryan McMasters might be best known for his music and sound design for theater troupe No Name Players. But McMasters is a composer, too, and two of his works feature in reSOUNDing Courage, three evenings of chamber music, dance and spoken word he's curated for No Name. The program includes Frederik Rzewski's "Coming Together" and "Attica," both works inspired by letters from prisoners involved in the 1971 Attica prison uprising. Vocalist Anna Elder is featured in "Battle Hymns," a song cycle of Civil War tunes arranged by McMaster for string trio. Along with local and visiting musicians, the weekend's collaborators at Off the Wall Theater also include members of Texture Contemporary Ballet and Continuum Dance Theatre. BO 8 p.m. Also 8 p.m. Fri., July 11, and 8 p.m. Sat., July 12. 25 W. Main St., Carnegie. $15-20. 412-207-7111 or www.nonameplayers.org 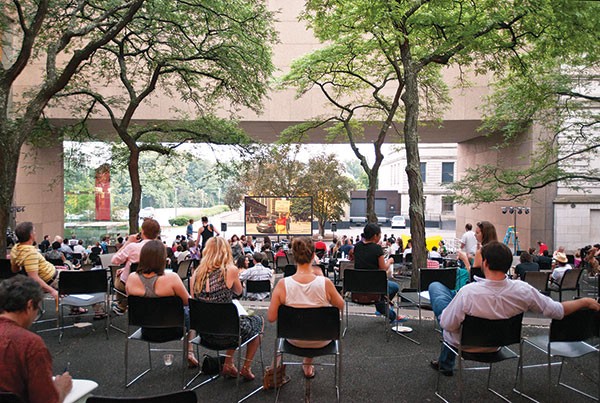 If you've ever thought it would be nice to spend a summer evening on the back patio of the Carnegie Museum of Art — the terraced Sculpture Court just outside the big glass wall — watching movies and sipping a cool beverage, tonight's the night. The museum's 2-Minute Film Festival, founded in 2010, threatens to become a tradition, with filmmakers from around the country vying to create prize-winning works of 120 seconds or less. This year's theme is "Outer Space." Watch the finalists and help choose an audience favorite tonight; at 8:15 p.m., in the museum's indoor theater, pre-game with a screening of the documentary "Extraterrestrial," about efforts to digitally recover the first photographs of the lunar surface. BO 7:30 p.m. (screening at 9:15 p.m.) 4400 Forbes Ave., Oakland. $10. www.2mff.cmoa.org