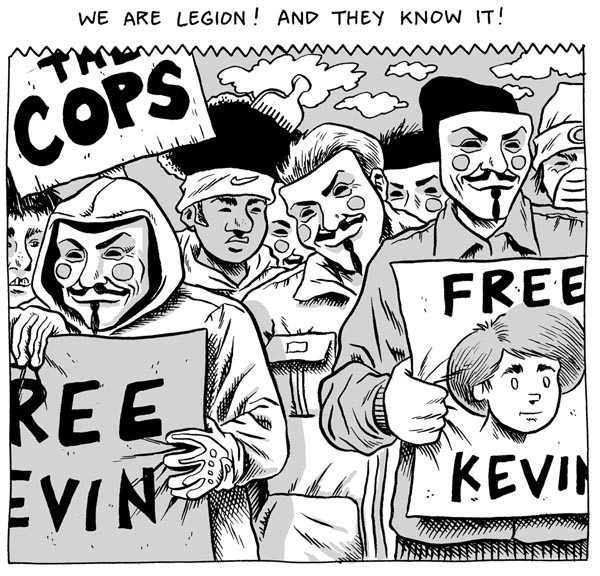 Speaking by phone from the San Diego Comic-Con, Ed Piskor is having a day from an Ed Piskor cartoon. First he reports seeing "some crackheads" digging cans out of the trash. Then come muffled shouts on the line — "Jesus protesters," Piskor reports, assailing the assembled geeks with shoddy megaphones. And don't forget his recent connecting flight, full of Con attendees: "It felt like I was on a flying short bus," he quips. Piskor, 29, of Munhall, is Pittsburgh's hottest cartoonist. In recent years, he's illustrated for the late American Splendor author Harvey Pekar (Macedonia, The Beats) and for Cartoon Network series Mongo Wrestling Alliance. Now comes Wizzywig (Top Shelf), Piskor's debut solo graphic novel. Wizzywig began in 2008, as self-published volumes that follow fictional computer hacker Kevin "Boingthump" Phenicle from early-'80s adolescence to federal prison. Painstakingly detailed, ranging from darkly humorous to harrowing, Wizzywig's been praised from Wired to Publisher's Weekly; Rolling Stone called it "the next big thing in graphic novels." The book-release party is July 27, at ToonSeum. Meanwhile, Piskor's new labor of love is Hip Hop Family Tree, a comics series on BoingBoing.net. Strips have been retweeted by the likes of Chuck D and Fab Five Freddy. "I want this to end up being the most comprehensive history of rap music ever," says Piskor. Bill O'Driscoll 8-10 p.m. Fri., July 27. 945 Liberty Ave., Downtown. Free. 412-232-0199 or www.toonseum.org

Among Pittsburgh's forgotten historical oddities is Luna Park, the sizable amusement park that opened in North Oakland in 1905 and burned down in 1909. "It's like this ghost that lives in Oakland," says playwright Murphi Cook — not least because its founder was doomed visionary Frederick Ingersoll. Working as The Society for the Advancement of Miniature Curiosa, Cook and puppet artist Zach Dorn stage The Luna Park Spectacle at the Brew House. The performance work uses live actors, puppets and 3-D artwork by Jim Rugg to explore what Cook calls "the dark side of the amusement park" with a Pee-wee's Playhouse sensibility; the centerpiece is an interpretation of Ingersoll's The Mystic River, a crazy boat tour. One goal is to "recreate the sense of awe that Pittsburghers felt" when confronted with the Luna's then-overwhelming array of electric lights: "We wanted to make a play that felt like a ride." Bill O'Driscoll 8 p.m. Fri., July 27. (6:30 p.m. reception). Additional performances at 8 p.m. Sat., July 28; Aug. 3 and 4; and Aug. 10 and 11. 2100 Mary St., South Side. $12. www.lunaparkproject.com

It isn't every day that the actors who played Superman, Jabba the Hutt and Austin Powers' Mini-Me convene in the same location, much less in Pittsburgh. All the more reason, then, to visit the Monroeville Convention Center this weekend, and take advantage of these celebrity sightings. At this year's Steel City Con — a toy, comic, film and pop-culture-collectibles show — everyone from a former WWE star to an entertainment reporter is in attendance, alongside merchandise dealers. Andy Tybout 2-8 p.m.; 10 a.m.-6 p.m. Saturday; and 10 a.m.-4 p.m. Sunday. 209 Mall Blvd., Monroeville. $12 per day; $20 for three-day pass. 724-502-4350 or www.steelcitycon.com

Locals yearning to experience Paris' celebrated nightlife needn't book an expensive overseas flight — at least not if they're only interested in the city's more old-fashioned, romantic aspects. Tonight, the Pittsburgh Song Collaborative presents "La Belle Époque Cabaret: An Evening in the Bohemian Style," a program of songs, monologues and comedic sketches that evoke the spirit of the city at the turn of the 20th century. Benjamin Binder, Rob Frankenberry, Liza Forrester and Joseph Gaines perform selections by Yvette Guilbert, Aristide Bruant and other singers. AT 7:30-10 p.m. Carnegie Music Hall Foyer, 4400 Forbes Ave., Oakland. $20-$25. 412-622-3288 or www.cmoa.org

Making a movie, as anyone involved in filmmaking can attest, is hard enough under normal circumstances. But for participants in Pittsburgh's 48 Hour Film Project, even routine procedures — writing, shooting, editing, and scoring — take on a new dimension of difficulty. Last Friday, teams were given a character, a prop, a line of dialogue and a genre, all of which they had to incorporate into a short film by Sunday. Today and tomorrow, the results of their efforts are on display at the Hollywood Theater. A "best of" screening will follow on Aug. 4. AT 1 and 4 p.m.; also 1 and 4 p.m. Sun., July 29. 1449 Potomac Ave., Dormont. $6-8. 412-563-0368 or www.48hourfilm.com/en/pittsburgh

Most art exhibits restrict their focus to a particular person, period or medium. But starting tonight, the Associated Artists of Pittsburgh will showcase work encompassing a wide range of styles. Earlier this summer, the 102-year-old nonprofit encouraged its members to submit any 2-D art they completed during their careers; "there is no time limit," the call for entries emphasized, "to the life of a vision." The exhibit, Timeless, juried by the Carnegie Museum of Art's Amanda Donnan, runs through Aug. 18. AT 5:30-8:30 p.m. opening night. Silver Eye Center for Photography, 1015 E. Carson St., South Side. Free. 412-361-1370 or www.aapgh.org

Before the Baby Boomers grew up, went corporate and ruined everything, they fancied themselves the ultimate champions of Youth Power. Or at least that's the story in Wild in the Streets, a gloriously campy cinematic artifact from 1968. In it, a young pop singer becomes president and puts everybody over 30 into internment camps, where they're forced to take LSD. The film, which features Shelley Winters and an early role for Richard Pryor, concludes Pittsburgh Filmmakers' month-long series of films that take a strong stand. Al Hoff 8 p.m. Regent Square Theater, 1035 S. Braddock Ave., Edgewood. $9. 412-682-4111 or www.pghfilmmakers.org

The kooky and ooky Addams Family have had many homes: Originally from the pen of cartoonist Charles Addams, the brood has appeared on TV, in films and now, in an eponymous Broadway musical. The Benedum Center presents the macabre cast of characters in a Pittsburgh CLO and PNC Broadway Across America-produced show, opening tonight. Featuring several Tony-nominated actors, The Addams Family follows Wednesday Addams, the family's now-grown-up daughter, as she attempts to win her parents over to the "normal" boy with whom she's fallen in love. AT 7:30 p.m. Through Aug. 12. 803 Liberty Ave., Downtown. $22-$71. 412-456-6666 or www.trustarts.org

While it may seem as if modern times have created the "pet portrait," people have been snapping photographs of their pets for as long as there have been cameras. Opening today at Photo Antiquities Museum of Photographic History is The Dog Days of Summer, an exhibit of more than four dozen albumen prints from the mid-19th century depicting dogs; one photo dates back to 1852. In the works, man's best friend is depicted with children, adults and occasionally, just in solitary dogginess. AH 10 a.m.-4 p.m. Mondays, and Wed-Sat. 531 E. Ohio St., North Side. $10. 412-231-7881 or www.photoantiquities.org