While researching a mural project in Shadyside, artists Logan Randolph and Nic Marlton learned the unlikely story of Margo Lovelace, who in 1964 launched Lovelace Marionette Theater at 5888½ Ellsworth Ave. Along with entertaining two decades' worth of Pittsburgh kids, Lovelace helped spark the neighborhood's rebirth as an arts corridor. But Randolph and Marlton's Margo Lovelace Project didn't end with their Lovelace-inspired mural on Ellsworth (detail pictured), a kids' puppet workshop, nor even Alex Lee's in-progress Lovelace documentary. This Sunday, the Project and the Weather Permitting series present The Lovelace Puppet Festival. The Shadyside Nursery event features six original performances by local artists. Cheryl Capezzuti and Kellee Van Aken present "Random Teleology," a selection from their new puppet opera "Songs from a Lost Civilization." The Schmutz Company offers "Moses of the Allegheny," a "wild yet (most likely) true" story about a baby who survived the Johnstown Flood only to become a sideshow attraction. Other performers include Creative Citizen Studios, Cyberpunk Apocalypse, Joan Kielar and Miko Miko. Lovelace now lives in New Jersey. "She had a dream and she accomplished absolutely everything she set out to do," says Marlton. Adds Randolph: "Her legacy was that she found a way for creativity and the creative process to be a way to revive the community and the neighborhood." Bill O'Driscoll 5-9 p.m. Sun., July 27. 510 Maryland Ave., Shadyside. $10 (includes beverage with ID). www.weatherpermittingpgh.com

709 Penn gallery presents Monotype Prints, an exhibition of local artist Jo-Anne Bates' latest work. The opening reception is tonight. The artist's color palette for this exhibit was inspired by her travels to South Africa a decade ago, and the vivid hues of both the landscape and the locals' clothing. Bates has been a major local proponent of the arts, serving as chairwoman of Pittsburgh Public Schools' Friends of Art committee and as a member of the Carnegie Museum of Art Education Committee. Dan Willis 5:30 p.m. 709 Penn Ave., Downtown. Free. 412-456-6666 or www.trustarts.org

Tonight at Unsmoke Artspace, it's art you can knock around. Carnival Part Deux is the follow-up to Unsmoke's popular 2012 event that asked artists to go midway for a night of playable artworks — like Tresa Varner's "Punk Town-Knock Down" game (pictured) — and performances for the whole family. Step right up to work by more than a dozen artists in total, also including Mary Tremonte, The App Expo, Alisha Wormsley and Dave English. Pizza will be made in Unsmoke's famous outdoor wood-fired oven. Bill O'Driscoll 6-10 p.m. 1137 Braddock Ave., Braddock. Free. unsmoke@gmail.com or www.unsmokeartspace.com

Last year, the formerly Pittsburgh-based writer, playwright and performer Robert Isenberg moved to Costa Rica, where he's been reporting for the English-language Tico Times. His work there includes a series of short documentaries for the publication, some of which the former regular CP contributor screens tonight in Mucho Gusto, his mini film fest at ModernFormations Gallery. Featured: a (humane) bull-fight; a portrait of a German woman who's swum Costa Rica's Pacific Coast seven times; a Nicaraguan cigar factory; and an account of Isenberg's own Caribbean-to-Pacific bike ride. BO 7 p.m. 4919 Penn Ave., Garfield. $2. www.modernformations.com

Gabrielle Revlock and Nicole Bindler, two Philadelphia-based dancers and choreographers, bring their award-winning "community performance work" I made this for you to the Kelly-Strayhorn Theater tonight for one night only. The genre-defying collaboration incorporates elements of satirical theater, yoga and even the kissing of audience members. It was designed to break down the barrier between performer and audience, as well as seamlessly integrate elements of improvisation into careful choreography. The show will also utilize the talents of 25 additional dancers, all local. DW 8 p.m. 5941 Penn Ave., East Liberty. Pay-what-you-want. 412-363-3000 or www.kelly-strayhorn.org

As part of its ongoing, multi-faceted XOXO exhibit, and in accordance with the show's themes of love and forgiveness, the Pittsburgh Children's Museum presents The Gift, a reinterpretation of O. Henry's "The Gift of the Magi" by Pittsburgh's own Zany Umbrella Circus. Performers Ben Sota and Karen Forney use masks, audience participation and circus skills to explore gift-giving as an expression of love. It's this 30-minute show's final weekend; today's performances will be ASL-interpreted, and a workshop on animation projection and acting in masks will follow the first performance. DW 1 and 3:30 p.m. Also 1 and 3:30 p.m. Sun., July 27. 10 Children's Way, North Side. $12-14. 412-322-5058 or www.pittsburghkids.org

Pittsburghers with a little kayaking experience and a big itch to get out of the city have a perfect opportunity tonight, when Venture Outdoors holds its Stargazing Paddle at Moraine State Park. The moderate-difficulty kayaking excursion will go from dusk until about 10:30 p.m., with the ultimate goal of seeing a starlit sky. Beginner's paddling lessons and ecology tours are also scheduled to take place in the park throughout the rest of the summer. DW 8 p.m. 225 Pleasant Valley Road, Portersville. $33. 412-255-0564 or www.ventureoutdoors.org

It's the closing weekend of Opera Theater's SummerFest, but it's going out with a full slate of performances including one world premiere. Happy Hour! is a set of nine commissioned, comic "bar arias" depicting Pittsburgh singles on the dating scene, from "Karaoke Catastrophe" and "Bachelorette" to "Desperately Seeking" and "Full Service Menu." The composer is Pittsburgh-based Roger Zahab, with librettos by local talent as well. The cast features Opera Theater's 2014 Young Artists. Drink it all in at performances tonight and tomorrow. BO 10 p.m. Also 5:30 p.m. Sun., July 27. 4201 Bigelow Blvd., Oakland. $25 (students half-price at the door). 412-386-9687 or www.otsummerfest.org

In the wake of all that World Cup madness, what the rest of the globe calls "football" takes over Heinz Field today as Pittsburgh becomes one of 12 North American cities to host the second annual Guinness International Champions Cup. The tourney brings eight elite European squads across the pond for a competitive version of the Continent's traditional preseason. Pittsburgh gets reigning Premier League champ Manchester City playing Italy's A.C. Milan. This afternoon's match is one of three for each team in the Cup's round-robin format. BO 4 p.m. North Side. $35-275. www.internationalchampionscup.com 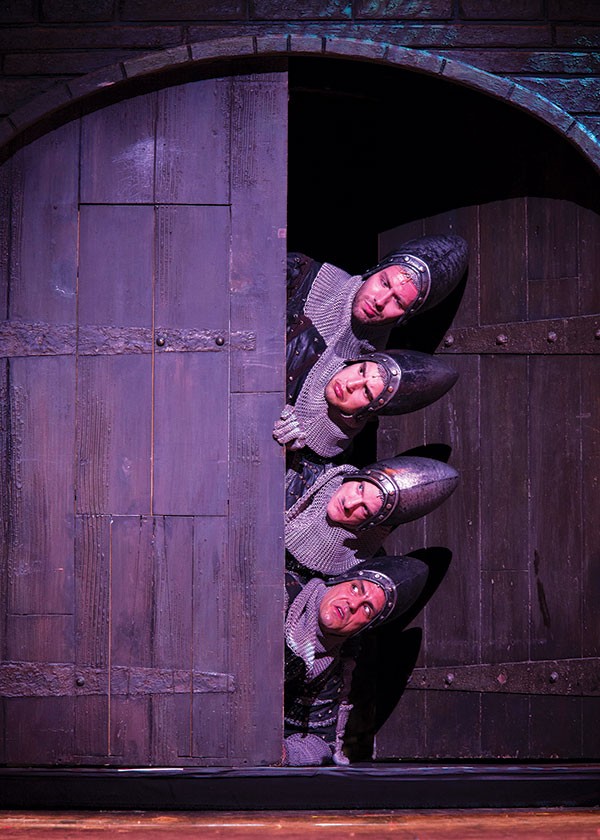 Spamalot, the Tony-winning musical based on Monty Python and the Holy Grail, tonight begins an eight-show run at the Benedum Center. The show, which concludes Pittsburgh CLO's summer season, incorporates musical material from across the Monty Python canon in spoofing the legend of King Arthur and the Knights of the Round Table. Closed-captioning and audio description are available for select performances. DW 8 p.m. Continues through Aug. 3. 803 Liberty Ave., Downtown. $10-65.75. 412-281-3973 or www.pittsburghclo.org