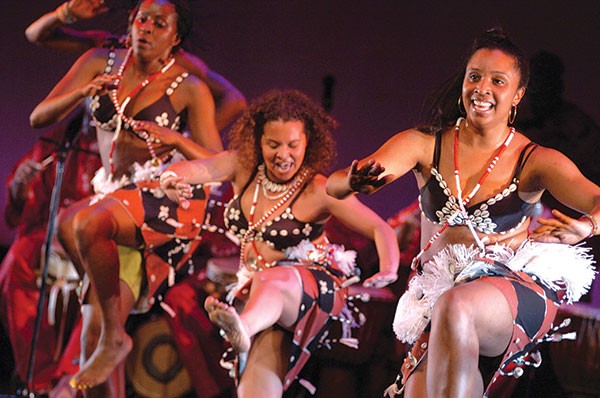 There's a two-day pickle festival on the Rachel Carson Bridge — yes, this was fact-checked. Picklesburgh, a free event of the Pittsburgh Downtown Partnership with sponsorship by Kraft-Heinz and Whole Foods, celebrates everything pickled. International pickled dishes; cocktails with pickled ingredients; contests in pickle-juice-drinking and homemade pickling; pickle ice cream — the list goes on. If you like anything to do with the word "pickle," the inaugural Picklesburgh is for you. JP 3-10 p.m. Also 11 a.m.-10 p.m. Sat., July 18. Downtown. Free. www.picklesburgh.com

Tattoos have been a part of human expression for millennia, whether to denote one's tribe or get back at Mom. Tonight, the Carnegie Museum of Natural History continues its 21-and-over After Dark parties with Inked. Learn the history of inks and what the earliest tattoo patterns symbolized; check out local tattoo artists' skills; make your own free screenprint; and dance to live music. Beer, wine and hors d'oeuvres can be purchased. JP 6-10 p.m. 4400 Forbes Ave., Oakland. $10-15. 412-622-3131 or www.afterdark.carnegiemnh.org

It's scary to imagine politics without satire; caring about government would be so boring! Thankfully, funny people have been dedicatedly skewering our leaders since the early days of journalism, and tonight the Toonseum unveils a collection of some of the best current political cartoons. Slinging Satire: Political Cartoons and the First Amendment features more than a dozen Pulitzer-winners and work from prominent magazines, websites and newspapers. The exhibit also engages the post-Charlie Hedbo conversation over satire's rights and limits with cartoons addressing the attack. JP 7-10 p.m. 945 Liberty Ave., Downtown. Free. 412-232-0199 or www.toonseum.org

Of all the superheroes, the one who could really lighten up is Batman. Some of his friends — but mostly his enemies — seem aware of this, and tonight they're staging The Roast of Batman, at Club Café, courtesy of Race to the Coffin Comedy. Hosted by Bane (John Dick Winters), the Dark Knight (Ray Zawodni) will be powerless against verbal onslaughts by the likes of the Joker (Alex Stypula), Superman (Travis Walling) and Mr. Freeze (Shannon Norman). This event is 21-and-over. JP 10:30 p.m. 56 S. 12th St., South Side. $5. 866-468-3401 or www.clubcafelive.com

Those VHS connoisseurs at the nationally touring Found Footage Festival have a new treat. The Wonderful World of Boning combines clips of vintage sex-ed videos with comedic commentary by hosts Lux Alptraum (a former sex-ed teacher and Fleshbot.com blogger) and former Onion writer Joe Garden. The program includes: "Seriously Fresh" (blending '90s fashion and slang with HIV ed); "You, Your Body and Puberty"; the 1981 classic "A Family Talks About Sex"; and the animated "What's Happening to Me?" The on-screen acting is sure to be as good as the scripts at tonight's midnight showing at Arcade Comedy Theater. Bill O'Driscoll Midnight. 811 Liberty Ave., Downtown. $10. www.arcadecomedytheater.com

Sometimes abstract, sometimes suggesting natural or man-made objects, Erin Treacy's paintings and paper assemblages explore time and fragmentation, inspired principally by nature. Jim Studeny's paintings, meanwhile, are inspired solely by Japanese woodblock prints from the 16th through 18th centuries, from Kuniyoshi's samurai images to Hokusai's landscapes. The New York-based Treacy and Pittsburgh's own Studeny share an opening reception today at Boxheart Gallery. It's a good excuse to check out her exhibit, Dismantled and Reclaimed, and his You Only Live Twice. BO 5-8 p.m. Exhibits continue through Aug. 21. 4523 Liberty Ave., Bloomfield. Free. 412-687-8858 or www.boxheartgallery.com

Thanks to her book I Can Barely Take Care of Myself: Tales From a Happy Life Without Kids, Jen Kirkman — appearing tonight at the Rex Theater — is a hero to many in the child-free-by-choice club. "You do not want me to be a mother," she quips. "If I had a daughter and she was screaming, ‘Mommy, there's a monster under my bed!' I'd be like, ‘Of course there is, that's where they live!'" But breeders, too, can enjoy Kirkman's conversationally acerbic comedy, honed in regular appearances on Chelsea Lately and on her recent Netflix special, I'm Gonna Die Alone (And I Feel Fine). Margaret Welsh 8 p.m. 1605 E. Carson St., South Side. $15. 412-381-6811 or www.rextheater.com

When was the last weekend you crossed off your entire to-do list, let alone wrote, shot and edited an entire movie? That's the challenge of the 48 Hour Film Project, the worldwide timed film competition. Participants started with a prop, a character and a line of dialogue, drew a genre from a hat and got to work. That was last weekend. Screenings of the short films completed by Pittsburgh's 46 production teams run today through Tuesday at the Hollywood Theater. Audience members can vote for their favorites. Winners vie for a slot at the Cannes Film Festival. JP 3 and 7 p.m. Also 7 p.m. Mon., July 20, and 7 p.m. Tue., July 21. 1499 Potomac Ave., Dormont. $6-8. 412-563-0368 or www.48hourfilm.com/pittsburgh-pa