by Romare Bearden
"The Train"

We can't show you any art from Space Gallery's Drawn in a Day, because the exhibit doesn't exist yet. But you can watch it being made 1-9:30 p.m. Fri., July 15. That's when 12 artists or artist teams will create large drawings directly on the big gallery's walls, straight through the opening reception of this exhibit guest-curated by Robert Raczka (an occasional CP contributor). But Drawn in a Day is just one highlight of the Pittsburgh Cultural Trust's summer Gallery Crawl. The August Wilson Center for African American Culture opens From Process to Print: Graphic Works by Romare Bearden. Bearden -- world-renowned for his collages evoking African-American life and culture -- grew up largely in Pittsburgh; this nationally touring exhibition traces his artistic journey. Elsewhere, Wood Street Galleries opens Long Are the Days, Short Are the Nights, with videos, installations and photographs by contemporary Icelandic artists; 709 Penn Gallery opens In Search of Something More, featuring Stephanie Armbruster's paintings; the Trust Arts Education Center hosts Facebook It, a live photo shoot of gallery-goers (that's you) by local professional photographers; and Jason Sauer's Love Letters opens at 929 Liberty, a one-night show employing twisted bicycle parts. Post-crawl, there's Cosmopolitan Pittsburgh, a three-level, cruise-themed party (ticketed) with live music, dancing and more, at 119 Sixth St. Bill O'Driscoll 5:30-9 p.m. Fri., July 15. Downtown. Free. (Cosmopolitan Pittsburgh tickets are $40-125.) 412-456-6666 or www.pgharts.org

Sebastian Maniscalco brings his exuberant observational comedy to the Improv tonight for the first of five shows. Ridiculous facial expressions and a general disdain for human behavior permeate Maniscalco's routine, as seen on The Late Late Show With Craig Ferguson, The Tonight Show and others on the late-night circuit. Maniscalco is preparing a new hour-long comedy special this spring, a follow up to the Comedy Central show that catapulted him to fame in 2009, Sebastian Live! Brendan Sullivan 8 p.m. Shows continue through Sun., July 17. 166 E. Bridge St., Homestead. $17. www.improv.com/Comedyclub/pittsburgh

Art, architecture and genetic engineering meet at the debut of Pratique SPACE. The new gallery and "lifestyle boutique" hosts Growing Home-Biology/Architecture, an exhibit of sculptures by Dale Luce inspired by the idea that plants might be artificially modified to grow themselves into shelter for humans. Which would, at least, give new meaning to "couch potato." Tonight's opening reception is free. BO 6 p.m. Exhibit continues through Sept. 15. 4027 Butler St., Lawrenceville. 412-728-2685 or www.pratiquespace.com 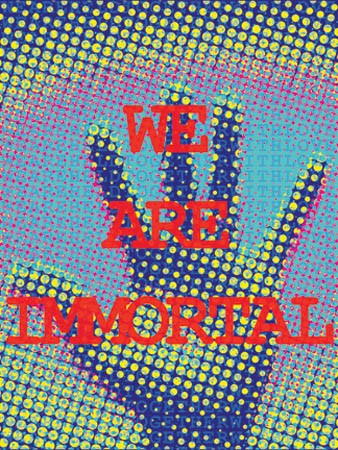 Art by Nicholaus Arnold.
"we are immortal"

Capitalism's boom and bust is manifest in Braddock, a once-thriving mill town and for decades a shell of that former self. But members of BrokenDayton Art Machine are here to address not impermanence, but rather immortality through art. The nationally known artist collective from Dayton, Ohio, uses nontraditional and public spaces, and this week it's chosen Unsmoke Artspace. With the exhibit I AM IMMORTAL, artists including Nicholaus Arnold, Ian Breidenbach and Ashley Jonas explore Braddock's own art-and-culture-based revitalization efforts. At tonight's opening reception, please bring items for a time capsule … which will be buried on site at the exhibit's closing ceremony, on July 22. BO 6-10 p.m. 1137 Braddock Ave., Braddock. Free. www.unsmokeartspace.com

It's been 150 years since the Civil War, and the Union has plenty of parties in store. Ambridge, located downriver on the Ohio, celebrates its Civil War Day today, with regiments of re-enactors, a field hospital and a Union recruitment office; refreshments are available in the Granary. Up until 1905, the town was known as Economy, the final home of the German Lutheran Separatists, a celibate, pacifist community that nonetheless directly supplied the Union Army and aided war widows and orphans. BS 10 a.m.-5 p.m. 270 16th St., Ambridge. $12 ($6 children). www.oldeconomyvillage.org

Venture Outdoors, the organization that brought kayaks to Downtown and thousands of hikers, bikers and snowshoers to local trails, celebrates its 10th anniversary with a party under the Clemente Bridge, at Kayak Pittsburgh. Free food, free crafts and free bluegrass music from the Mon River Ramblers would seem like enough, but this party on the North Side also has kayaking, fishing and biking -- all for free, even if you're not a VO member. The grill is hot from noon to 4, and attendees are asked to bring a potluck dish to share. Everyone will be entered in a raffle to win a kayak. And yes, there's a birthday cake. BS Noon-4 p.m. North Side. Free. www.ventureoutdoors.org

The Steel City Slam poetry team is about to head off to the National Poetry Competition, in Boston, but not before we throw them a party. Shadow Lounge hosts, and there will be rounds of open-mic time for everyone to share his or her best stuff; in between, the team will perform a mini-show to prep for the big day. The event also serves as the official release for the new chapbook Busted Futures/Gentle Dreams, by William James. In short, party over here. BS 9:30 p.m. 5972 Baum Blvd., East Liberty. $5. www.shadowlounge.net