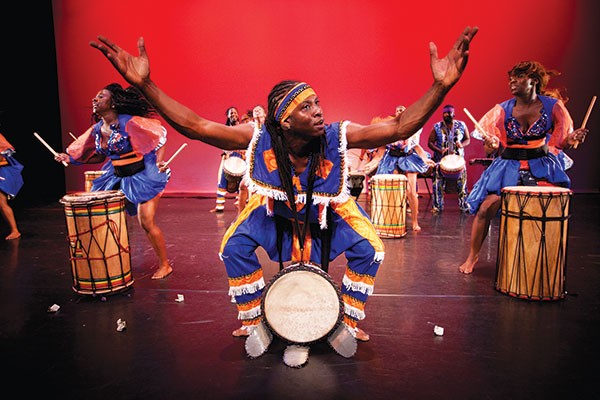 Song, music, dance and the richness of the African diaspora come together in Asase Yaa African-American Dance Theatre's ballet of Drum Love, presented by Kente Arts Alliance, at the North Side's New Hazlett Theater. With Drum Love, the Brooklyn-based troupe will make its Pittsburgh debut, having performed around the world including in Japan, Korea, France, Iceland, Ghana, Guinea and the Netherlands. Asase Yaa has also appeared at VH1's Hip Hop Honors, Stars of New York Dance and at the premiere of the HBO documentary film Sing Your Song, with Harry Belafonte. Drum Love brings together nine dancers, seven musicians and singer/historian Mandingue Djelimuso to tell the uplifting story of a young naïve girl who finds herself in love with two handsome big-city artists. Though she is warned by friends and family to avoid these men, she creates a situation that will bring shame to her family. By ballet's end, however, she recognizes her mistakes and embraces the support of her family and friends. The 90-minute production features colorful costumes, traditional music, including a balafon player, and dance from Guinea, West Africa. Its energy and excitement, says Asase Yaa co-director Kofi Osei Williams, "will keep you on the edge of your seat." Steve Sucato 8 p.m. New Hazlett Theater, 6 Allegheny Square East, North Side. $20. 1-888-71-TICKETS or www.kentearts.org.

Although it concerned children with cancer, Dani Girl, the first stage musical by young Carnegie Mellon alums Michael Kooman and Christopher Dimond, went on to productions in Toronto, Boston and Australia. Kooman (music) and Dimond (book and lyrics) are now working on a commission from the Kennedy Center; they're that good. Their latest work, made for Pittsburgh CLO's CLO Cabaret, is the musical comedy Judge Jackie Justice. It's about a TV judge who rules on cases involving zombies, spaceships and furries ... until the tables are turned. The premiere production, directed by the CLO's Van Kaplan, opens tonight. Bill O'Driscoll 7:30 p.m. Continues through April 27. $34.75-39.75. 412-456-6666 or www.CLOCabaret.com

J.T. Rogers' 2004 Madagascar received the American Theatre Critics Association's award for best new play and the 2005 Pinter Review Prize for Drama; the U.K.'s Telegraph called it "a subtle and haunting piece [that] quietly captures ... how little we may know about those we love, and the shifting nature of personality itself." Quantum Theatre's new production is Rogers' first play to be staged in Pittsburgh. Madagascar depicts three Americans individually telling their stories in a Roman hotel room: the wealthy widow of a famed economist who's vanished; her daughter; and one of the economist's former colleagues. Directed by Sheila McKenna, the stellar cast — Helena Ruoti, Larry John Meyers and Melinda Helfrich — performs in the resplendently marbled The Carlyle, in Downtown's Fourth Avenue Historic District. The first performance is tonight. BO 8 p.m. Continues through Feb. 16. 306 Fourth Ave., Downtown. $18-49. 412-362-1713 or www.quantumtheatre.com

Judging by the praise for EM Lewis' Heads, a play about four people held hostage in Iraq, seeing this show belongs on your to-do list. The Los Angeles Times hailed Heads as one of its top-10 productions of 2007. The Denver Examiner website described it as "a welcome, intelligent and moving drama." The show debuts tonight, presented by Point Park University's The REP, and directed by John Shepard. Angela Suico 8 p.m. Continues through Feb. 16. Pittsburgh Playhouse, 222 Craft Ave., Oakland. $15 (Jan. 30 preview performance only; subsequent shows are $24 and $27). 412-392-8000 or www.pittsburghplayhouse.com

Don't let these pesky polar vortexes keep you from enjoying the great outdoors. Beat back the cold by bundling up and fortifying yourself with beans. Today, Venture Outdoors leads a Dutch Oven Chili Hike through Hollow Oak Land Trust, near Moon Township. Work up an appetite on an easy 3-to-4-mile hike around this wooded conservation area, then replenish those calories with chili cooked over the campfire. Al Hoff 1 p.m. Montour Run, Moon Township. $15 (members)/$20 (non-members). 412-255-0564 or www.ventureoutdoors.org

On the cover of Amy Regan's latest album, Pretty Little Baby, the singer-songwriter appears to be practicing her child's pose (on a wall, no less), so it's little surprise that her show tonight is at BYS Yoga. She'll perform a bit for the Healing a Broken Heart yoga class at 5:30 p.m., but the full concert starts at 7:30, if you're interested in remaining upright while listening. Either way, the folky pop singer will please with her personal tunes and silky vocals. Andy Mulkerin Class: 5:30 p.m.; concert: 7:30 p.m. 1113 E. Carson St., South Side. Class: $10-15; concert: $10. 412-481-9642 or www.bys-yoga.com

Supreme Court Justice Sonia Sotomayor speaks at the University of Pittsburgh tonight. In a conversation with Pitt Chancellor Mark Nordenberg, she'll address the personal history described in her memoir, My Beloved World. Justice Sotomayor will also take questions, both pre-submitted and from the audience. Feel free to ask her advice for forging a career in law, but note that she cannot comment on current issues before the Court. A book-signing will follow the talk, presented by the Pittsburgh Arts & Lectures series. AS 7:30 p.m. Carnegie Music Hall, 4400 Forbes Ave., Oakland. $20-50. 412-622-8866 or www.pittsburghlectures.org

The Scholastic Art & Writing Awards change "My kid could paint that" from a low-blow insult into a statement of parental pride. The contest invites teenage artists and writers to submit their best work to a panel of creative professionals. Winners receive scholarships, and have their works showcased around the country in the Art. Write. Now. Tour 2013-2014. Beginning today, more than 130 literary and visual works will be on display at The Andy Warhol Museum — Warhol himself was a Scholastic winner in 1945 — as the show makes its stop in Pittsburgh. Opening reception is Fri., Feb. 7. AS Through March 2. 117 Sandusky St., North Side. Free. 412-237-8300 or www.warhol.org

Playwright Glen Berger might be best known as co-writer of the star-crossed Broadway musical Spider-Man: Turn Off the Dark. But his earlier work, Underneath the Lintel, couldn't be more different. The 2000 play has one character: a Dutch librarian obsessed with learning the secret behind a library book mysteriously returned 113 years overdue. The play's Pittsburgh premiere, at 12 Peers Theater, comes largely courtesy of local actor Randy Kovitz, who saw Berger give a reading of the script in New York, in 2009, and was blown away. "It starts out as a very realistic sort of lecture, but it turns into a beautiful piece of theater," says Kovitz, a seasoned stage and screen actor. He describes Lintel as "an existential detective story" that ultimately spans the globe and millennia of history. And it's played out on a stark stage, with just a chalkboard, a slide projector and a suitcase full of props. The play's title refers to decisions made in doorways, which in a moment can change the course of a life. A four-week run at the Pittsburgh Playwrights space, Downtown, begins tonight. BO 8 p.m. Continues through Feb. 26. 937 Liberty Ave., Downtown. $10-15. www.12peerstheater.org

It's unusual for an author to win both an O. Henry award and a Grammy, but Walter Mosley has done it. Whether he's writing novels or liner notes for Richard Pryor, Mosley produces work that's as diverse as his awards, with work ranging from science fiction to political essays to his most famous creation, the Easy Rawlins detective series. Mosley speaks tonight as the fifth author in the Pittsburgh Contemporary Writers' 2013-2014 lineup. AS 8:30 p.m. Feb. 16. Frick Fine Arts Building, 650 Schenley Plaza, Oakland. Free. 412-624-6508 or www.pghwriterseries.wordpress.com