Tami Dixon's South Side Stories premiered at City Theatre in December 2012. The one-woman show — part oral history, part tribute to one city neighborhood's survivors — is an alternately comic and poignant work that proved so popular it earned an extended run after the holiday. And now, a year later, it's back again by popular demand, for a new three-week run. Dixon portrays some 20 characters, most drawn from the South Side Slopes resident's own experiences and extensive interviews she recorded with longtime denizens. The characters are male and female, old and young, Slopes and Flats, from a retired mill-worker to a newcomer who feels shut out by the Slopes' insularity. Don't, for the most part, expect a portrait of today's East Carson Street scene, all bars and boutiques with a big outdoor mall at one end. That mall site, Dixon reminds us, used to be home to a steel mill, and she's more interested in those who outlasted mill culture than she is in the folks popping in at Urban Outfitters. Matt M. Morrow directs; the first performance in the intimate Hamburg Studio Theatre is Wed., Jan. 8. Bill O'Driscoll Jan. 8-26. 1300 Bingham St., South Side. $30-55 ($10 off for South Side residents). 412-431-2489 or www.citytheatrecompany.org

OK, says the Pittsburgh Public Theater: This time it's really your last chance to see Tom Atkins play Art Rooney in The Chief. Tonight's the first performance in the latest revival of this one-man show about the legendary Steelers founder, the most popular production in the Public's long history. The play, by Gene Collier and Rob Zellers, depicts a loquacious Rooney hanging out in his office in 1976, just after the Steelers' second Super Bowl. But The Chief is about more than football: Much of it concerns Rooney's Irish-American North Side upbringing, city politics, life at the horsetrack and more — a personal history of the 20th century. (Rooney was born in 1901.) The play premiered in 2003; previously, the Public had said that a 2011 revival would be the last. The show returned last year ... but one of these days, that "last call" is bound to come true. This run, with the iconic Atkins directed by Ted Pappas, has six performances. Bill O'Driscoll 8 p.m. Continues through Sun., Jan. 5. 621 Penn Ave., Downtown. $15.75-65. 412-316-1600 or www.ppt.org

Jennings Environmental Education Center is active all winter, for outdoor recreation as well as edification and volunteer opportunities. Today's the registration deadline for Jan. 11's Winter Trails Day, a day of free winter-sports instruction, including snowshoeing programs (for ages 8 and up) and cross-country skiing programs (ages 12 and up); participants must bring their own gear. And through Sun., Jan. 5, you can register to help out with the 14th annual Prairie Improvement Day. The center seeks volunteers ages 12 and up to spend the morning of Sat., Jan. 18, helping to manage this state park's 20-acre prairie ecosystem, Pennsylvania's only public protected prairie. Volunteers that day get a lunch of hot soup. BO 2951 Prospect Road, Slippery Rock. Register at 724-794-6011 or www.apps.dcnr.state.pa.us

"Adventuring Princesses," artist Maggie Lynn Negrete's series of original fairy-tale zines, is in black-and-white. Now, Negrete has invited eight local artists to color in the exploits of Dara of Robles and Alva of the Dark Crescent, who turn fairy-tale gender stereotypes on their heads. Invited artists include Brian Gonella, DS Kinsel, Lizzee Solomon and 10-year-old superfan Eleanor Musgrave. The results are on display tonight as Adventuring Princesses in Living Color, at The Roboto Project. The exhibit opens with a party where visitors will have the chance to do their own coloring-in. The event is part of Penn Avenue's Unblurred gallery crawl. BO 7-10 p.m. Exhibit continues through Jan. 31. 5106 Penn Ave., Bloomfield. Free. mgglnt@gmail.com 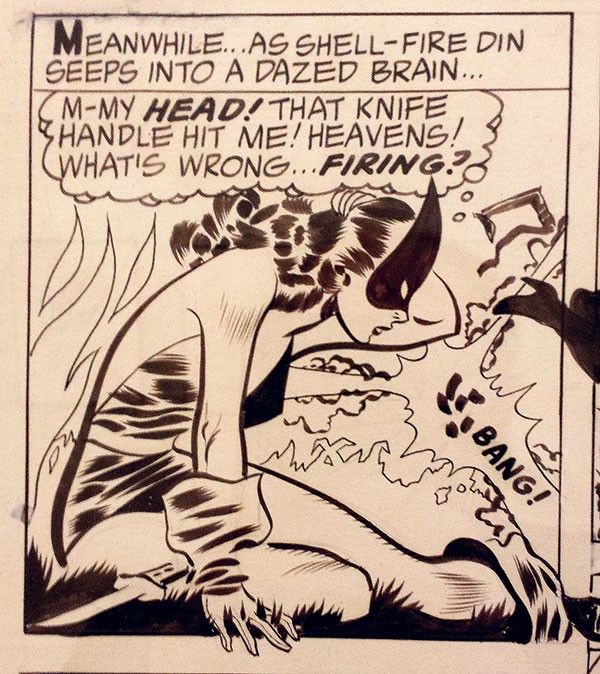 Wonder Women: On Page and Off, the new Toonseum exhibit, does not involve Wonder Woman, the iconic superhero. Rather, it chronicles women in the comics industry and their art, based on the work and art collection of comics historian Trina Robbins. That history, says Robbins by phone from her home in San Francisco, is notably long: Her own trove of original art by women cartoonists dates to 1903. "Some of them were really superstars," says Robbins. Pioneers included Grace Drayton (who created the fat-cheeked Campbell's Soup kids) and Nell Brinkley — whose Brinkley Girls were so popular they featured in Broadway's Ziegfield Follies. Dale Messick's long-running strip "Brenda Starr" debuted in 1940 ... but her earlier work had been rejected by a male editor who, Robbins says, complained that "he had tried a woman cartoonist once and she did not work out." Other artists less famous are also represented, including Jill Elgin, whose circa-1945 artwork for Harvey Comics' crime-fighter The Black Cat is pictured here. After the 1940s, when women replaced male cartoonists off at war, women struggled in the industry for decades. Even Wonder Woman herself was seldom drawn by women (though Robbins herself drew a four-part series for D.C. in 1985). But the rise of graphic novels has opened up opportunities, says Robbins, whose new history of women cartoonists is titled Pretty in Ink (Fantagraphics). Robbins says that change has delighted not just readers, but bookstore-owners and librarians, too: "They have been so happy to find all these books that have girl heroes in them." Bill O'Driscoll Opening reception: 7 p.m. Sat., Jan. 4 ($20). Exhibit runs through March 30. 945 Liberty Ave., Downtown. 412-232-0199 or www.toonseum.org

Ring out the holidays with a free choral concert at the Andrew Carnegie Free Library & Music Hall. The group Voces Solis will perform traditional but little-heard seasonal songs including "In the Bleak Midwinter" (based on a Christina Rossetti poem); an arrangement of "Riu Riu Chui," a traditional carol derived from a medieval Spanish chant; and "Shepherd's Pipe Carol." Voces Solis is an ensemble of The Summer Singers, a choral group composed of professional musicians, music educators and other trained singers. The group's members include Becki Toth, a Summer Singers co-founder known for her performances and directing with the Carnegie venue's resident theater company, Stage 62 Production. BO 4 p.m. 300 Beechwood Ave., Carnegie. Free. 412-276-3456 and www.carnegiecarnegie.org

Tonight, learn about American meat with American Meat. Graham Meriwether and Memo Salazar's 2013 documentary contends that our meat-production system of factory farms is bad for animals, bad for small farmers and bad for the environment — and that better ways of doing things can still feed everyone affordably. Featured is Joel Salatin, whose Polyface Farms was spotlighted in The Omnivore's Dilemma and numerous other food docs. The free screening at the East End Food Co-op is followed by a discussion with the store's meat buyer, Jessica Santacrose. BO 6:30 p.m. 7516 Meade St., North Point Breeze. Free; reservations required at 412-242-3598.

Acclaimed detective novelist Martha Grimes is back with The Way of All Fish. Her forthcoming follow-up to 2003's satirical Foul Matter, also set in the cutthroat world of publishing, revolves around two hit men, a wronged author and an unscrupulous agent. Grimes, 82, is a Pittsburgh native best known for her 22 Richard Jury mysteries and her biting humor; this year, she also published Double Double: A Dual Memoir of Alcoholism, written with her son, the pseudonymous Ken Grimes. Martha Grimes visits Mystery Lovers Bookshop tonight for a talk and signing. BO 7 p.m. 514 Allegheny River Blvd., Oakmont. Free. 412-828-4877 or www.mysterylovers.com