In the antebellum South, a slave keeps running away. His owner has him hanged, and leaves the body displayed. The slave's sister, Estella, wants to bury her brother. For the Tree to Drop began as local playwright Lissa Brennan adapting Antigone, then became its own work. The debut production is PICT Classic's season-opener, and also the premiere of the troupe's Downtown Series. The play has 11 performances starting Feb. 19 at the Pittsburgh Cultural Trust's Trust Arts Education Center. PICT artistic director Alan Stanford directs a skilled cast that includes Siovhan Christensen, as Estella, alongside David Whalen, Karen Baum, Linda Haston and Justin Lonesome. Brennan herself is familiar as an actor on local stages, including PICT's, and founded Dog & Pony Show Theatricals. While she's also an experienced playwright, Tree (its title drawn from the song "Strange Fruit") marks the first time a full-length play of hers has been produced by a company not her own. The play was developed through a 2013 staged reading at Bricolage Productions. Brennan (also a frequent contributor to CP's visual-art coverage) says that to her, Tree is a play about status and power — specifically, "resistance in the face of power, the powerless refusing to be controlled by the powerful." Bill O'Driscoll Thu., Feb. 19-28. Trust Arts Education Center, 805 Liberty Ave., Downtown. $40-48. 412-561-6000 or www.picttheatre.org

"Our forest is in progress, getting painted with Chinese ink," Jennifer Wen Ma wrote last week, on her Facebook page, about her new public artwork in Market Square. The Chinese-born, U.S.-based artist's work has been exhibited from Taipei to the Guggenheim, and she was chief designer of the visual and special effects at the opening and closing ceremonies at the 2008 Beijing Olympics. The new work, a commission, is the second art installation in the Market Square Public Art Program, a project of the Pittsburgh Downtown Partnership and the city's Public Art Division. (The first was last year's interactive sound-and-projected light installation Congregation.) Wen Ma's "forest," an installation, formally opens today. Bill O'Driscoll Downtown. Free. www.downtownpittsburgh.com

Traditional and modern values collide in Sumeida's Song, a Pittsburgh-premiere production by Pittsburgh Opera. The 2013 work by Arab-American composer Mohammed Fairouz (based on Tawfiq al-Hakim's play Song of Death) is set in a peasant village in Upper Egypt. The cast of Pittsburgh Opera resident artists includes Laurel Semerdjian as Asakir, the matriarch desperate for her educated son to avenge his father's long-ago murder. The four performances at Opera headquarters, in the Strip District, are sung in English. The first show is tonight. BO 8 p.m. Show continues through March 1. 2425 Liberty Ave., Strip District. $40.  412-281-0912 or www.pittsburghopera.org

"As I watched the struggles in Darfur and Sudan unfold, I felt compelled to present the horrific side of war to young readers in a way that they could understand," New York Times bestselling author Andrea Davis Pinkney says about her children's book The Red Pencil. The book follows a refugee girl who is given a red pencil, which allows her to express her grief. In a Pittsburgh Arts & Lectures Kids and Teens event, Pinkney visits the Hill House Kaufmann Center to read from and sign copies of her book today. ZM 2:30 p.m. 1835 Centre Ave., Hill District. $5-10; free for children under 3. 412-622-8866 or www.pittsburghlectures.org

With her 1994 book Black Noise: Rap Music and Black Culture in Contemporary America, Tricia Rose pioneered the study of hip hop as a cultural phenomenon. In her 2008 book The Hip Hop Wars, she argued that hip hop's influence on society was bigger than ever. Rose, a professor of Africana studies at Brown University, speaks today as part of the University of Pittsburgh's Black History Month programming. Her free lecture is slyly titled "Fighting Racism in a Color-Blind Era." BO 5:30 p.m. Alumni Hall (seventh floor), 4227 Fifth Ave., Oakland. Free. www.news.pitt.edu

Since the third century BCE, handscrolls have been a way of writing text and mounting artwork in China. New York-based, Chinese-born artist Yun-Fei Ji uses the scroll to address social change. As part of Carnegie Mellon School of Art's lecture series, Ji visits this evening to speak about his practice and the state of art today. Famously incorporating themes of mass displacement and environmental cataclysm, his works have been exhibited across the U.S. and Europe. ZM 5 p.m. Kresge Theater, CMU campus, Oakland. Free. 412-268-2409 or www.cmu.edu/art 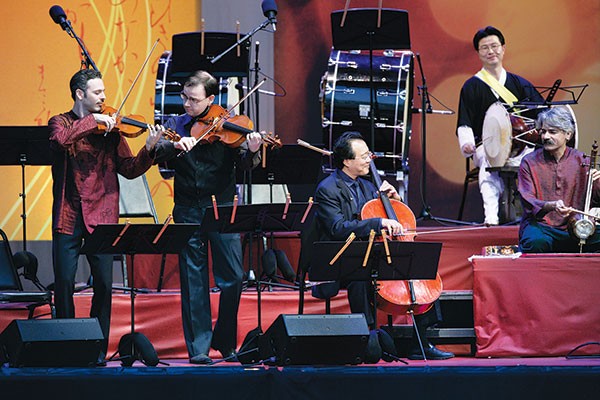 Yo-Yo Ma's 75 albums have garnered him 15 Grammys and world acclaim as one of the best cellists of all time. Tonight, the Silk Road Ensemble, a music collective Ma founded, makes its Heinz Hall debut. The group blends instrumentation and vocal styles from Eastern and Western traditions. Over the years, it has performed pieces ranging from traditional Chinese music to popular large-orchestra compositions by Strauss. With performers and composers from more than 20 countries, the ensemble uses instruments including a Chinese short-neck lute and a Japanese bamboo flute. The show is presented by the Pittsburgh Symphony Orchestra, which is not part of this performance. ZM 7:30 p.m. 600 Penn Ave., Downtown. $55-150. 412-392-4900 or www.pittsburghsymphony.org