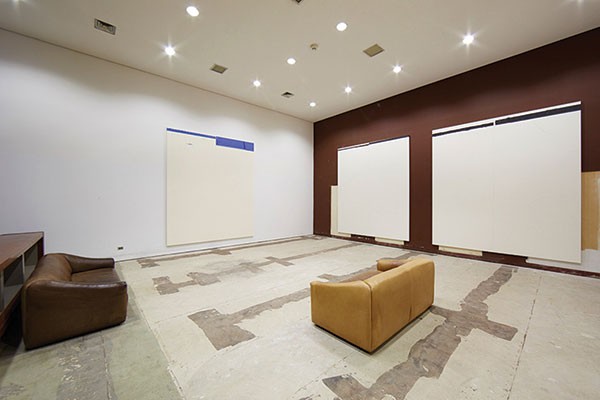 Drinkies are de rigueur at art openings, usually verboten in museum galleries. But while the Carnegie Museum of Art's monthly Culture Club always offers cocktails in the museum's lobby, on Dec. 13, visitors will be encouraged to imbibe in the makeshift gallery better known as the coatroom. That night, artist Wade Guyton and Carnegie International co-curator Daniel Baumann will serve drinks from behind the coatroom's counter-turned-bar, which stands alone after the removal of all those metal lockers to accommodate Guyton's large-scale abstract works made with an Epson printer. There is furniture, though: "The sofas are from my studio," Guyton tells CP by phone from his home base, in New York City. The informal event consists of chats with Guyton and Baumann and readings by local literary types (like Caliban Books' John Schulman) from texts by photographer Joel Sternfeld, whose series Sweet Earth: Experimental Utopias in America is also part of the International. (The evening includes a brief toddle to Sternfeld's work and Guyton's other work.) Baumann has often exhibited works by the internationally known Guyton at other venues; here, their goal is to reanimate a familiar space. "It's giving a life to the room it wouldn't otherwise have," Guyton says. But are he and Baumann actual mixologists? Not really. "It'll be tequila night," says Guyton. Bill O'Driscoll 8-11 p.m. Fri., Dec. 13. 4400 Forbes Ave., Oakland. $15-20 (includes drinks). 412-682-3131 or www.carnegieinternational.org

"Because we did not have threads / of turquoise, silver, and gold, / we could not sew a sun nor sky. / And our hands became balls of fire. / And our arms spread open like wings," wrote poet Shara McCallum in her 2003 collection Song of Thieves. The Jamaican-born poet, a professor at Bucknell University, has been published internationally. Today, at the request of the Library of Congress, she visits the Carnegie Library of Pittsburgh's main branch to share work from her latest collection, The Face of Water: New and Selected Poems. The free reading continues Pittsburgh Arts & Lectures' Writers LIVE series. Bill O'Driscoll 6 p.m. 4400 Forbes Ave., Oakland. Free. 412-622-8866 or www.pittsburghlectures.org

As they say in Elf, "The best way to spread Christmas cheer is singing loud for all to hear." This week and next, the Pittsburgh Symphony Orchestra joins the Mendelssohn Choir of Pittsburgh and other guests for Highmark Holiday Pops, a program of classic holiday tunes. Led by Todd Ellison, whom the New York Times calls one of "Broadway's electric conductors," the PSO will ring in the season for anyone of any age. Brett Wilson 7:30 p.m. Continues through Dec. 21. 600 Penn Ave., Downtown. $21-99. 412-392-4900 or www.pittsburghsymphony.org

Don't try the local "North Ver-sales" or "Du-boys" pronunciation trick with Pittsburgh je t'aime. The title of this show of some 100 prints of iPhone photos of the urban landscape, taken by Hilary Robinson, just wouldn't sound right without all those luxurious consonants. Robinson spent several years at Carnegie Mellon as dean of the College of Fine Arts and an art professor, and was a welcome presence on our arts scene. Now a dean at London's Middlesex University, she's contributed this photographic billet doux. It opens today at Filmmakers Galleries, sans reception; a closing reception is set for Feb. 17. BO Noon-6 p.m. Exhibit continues through Feb. 21. 477 Melwood Ave., North Oakland. Free. 412-681-5449 or www.pfm.pittsburgharts.org

School violence is chronic, and Wilkinsburg gets more than its share: One 2011 study ranked the town's school district as the most dangerous in the state. But during his 2012-13 artist residency at Wilkinsburg High School, Blaine Siegel saw other possibilities. In conjunction with his work in the Society for Contemporary Craft exhibit ENOUGH Violence: Artists Speak Out, Siegel has organized tonight's hour-long program of performances and readings by student musicians, writers and poets, including members of the school's marching band. BO 5:30 p.m. 2100 Smallman St., Strip District. Free ($5 suggested donation). 412-261-7003 or www.contemporarycraft.org

If you've always thought A Christmas Carol would be better with sword fights, Stage & Steel Productions has you covered. The local troupe specializing in stage combat presents A Medieval Christmas Carol, its brand-new ye olde version of the tale, this one depicting cold-hearted King Scrooge and various Yuletide ghosts. The script's by Ruth Comley, and Micheal R. Kiser directs a cast of six who play all the characters. The show has two more performances, tonight and tomorrow at Carnegie's St. Peter and Paul Hall. BO 8 p.m. Also 8 p.m. Sat., Dec. 14. 220 Mansfield Blvd., Carnegie. $5-12. www.stageandsteel.com

'Tis the season ... for holiday-themed spoofs. This weekend, at Arcade Comedy Theater, local stage troupe No Name Players performs Greg Kotis' new musical The Truth About Santa. Kotis promises to "peel back the tinsel" and reveal who Santa Claus really is. (The answer is recommended for those 18 and over.) No Name's Don DiGiulio directs tonight's late-night show and a Saturday performance. Meanwhile, Saturday's late-night slot at Arcade is a special holiday edition of the sketch/variety show Fireside Chat with Mark & Jonathan. BO Santa: 10 p.m. and also 8 p.m. Sat., Dec. 14. 811 Liberty Ave., Downtown. $5-10. www.arcadecomedytheater.com

Since late November, Native American artist Tommy Joseph has been working daily to hand-carve "The Hunt," a 16-foot Tlingit totem pole commissioned by the Carnegie Museum of Natural History. The Alaska-based Joseph (a member of the Eagle Moiety, Kaagwaantaan Clan) is widely known for carving canoes, masks and ceremonial objects. This morning, he'll unveil "The Hunt" for its installation at its new home at the museum. This Celebration of the Raising features Tlingit song, drum and flute by musician Morgan Redmon Fawcett, plus guided tours of the museum's permanent exhibit on Native Americans. BO Unveiling: 10:30 a.m. (museum hours: 10 a.m.-5 p.m.). 4400 Forbes Ave., Oakland. Free with museum admission ($11.95-17.95). 412-622-3131 or www.carnegiemnh.org

Benny Benack III is a rising jazz star, but the Benack name is familiar here: His grandfather was a Dixieland cornet player and local icon, and his father is a musician and educator. (His mother, too, is a singer.) Pittsburgh-born B3 is an acclaimed trumpeter and vocalist in his own right, now relocated to New York, where he plays out and teaches at Lincoln Center. But Benack, 23, comes home for the holidays with his band to hit the Backstage Bar during the Pittsburgh Cultural Trust's JazzLive series. And tonight's the night. BO 5-9 p.m. 655 Penn Ave., Downtown. Free. www.trustarts.org