I doubt we at City Paper are alone in wishing 2017 the hastiest of farewells. But that’s what’s great about an arbitrary “new year”: We imagine that at midnight, we start afresh. As always, this restorative fiction is aided by the city’s biggest annual evening-length festival. Highmark First Night Pittsburgh really is a fine (and affordable) excuse to enjoy the performing and visual arts alongside some 50,000 fellow human persons.

The Pittsburgh Cultural Trust event takes place in Downtown’s 14-block Cultural District, with more than 100 shows, exhibits and activities, both indoors and outdoors. Outside, for example: live ice sculpting alongside the fire-arts theatrics of Steel Town Fire. Indoors: silent disco at the August Wilson Center with HollyHood, DJ Inception and DJ Big Phill. The Downtown galleries are all open, and the Fort Pitt Museum, too. Duck into the Byham Theater for a comedy showcase with John Evans, Wally Baram and Day Bracey. Elsewhere, catch magic acts, contemporary, African and Chinese dance, and arts activities for kids, or try soul line-dancing in EQT Plaza. Musically, sample everything from rock ’n’ roll to bagpipers, jazz combos, classical guitarists and brass bands. Featured groups include Byron Nash and Plan B (at the outdoor Dollar Bank Stage) and WYEP local band of the year The Crew of the Half Moon (inside the Trust Arts Education Center).

Also, make time for the community parade along Penn (theme: “Love, Peace, Pittsburgh”). At 10:45 p.m., see headliner Lee Fields and the Expressions, fronted by the soul and funk vet, at the Highmark Stage, right where the Raising the Future of Pittsburgh Ball ascends at midnight. (Fireworks follow.)

Admission is the $10 price of a First Night button, available online; at the Box Office at Theater Square; and participating Giant Eagles (where there’s a $1 discount with an Advantage Card).

Holidays at the Frick is winding down. This year’s tour, a glimpse at the lifestyles of the 99 percent during the Gilded Age, is Through the Back Door: Domestic Service at the Clayton During the Holidays, which runs until Jan. 7. Afterward, catch Undressed: A History of Fashion in Underwear, the Frick Art Museum’s current exhibition. You can also take advantage of extended Friday hours (until 9 p.m.), and sit down for a holiday meal at The Café. Amanda Reed 10 a.m.-5 p.m. Holidays at the Frick continues through Jan. 7. 7227 Reynolds St., Point Breeze. $11-20. 412-371-0600 or www.thefrickpittsburgh.org 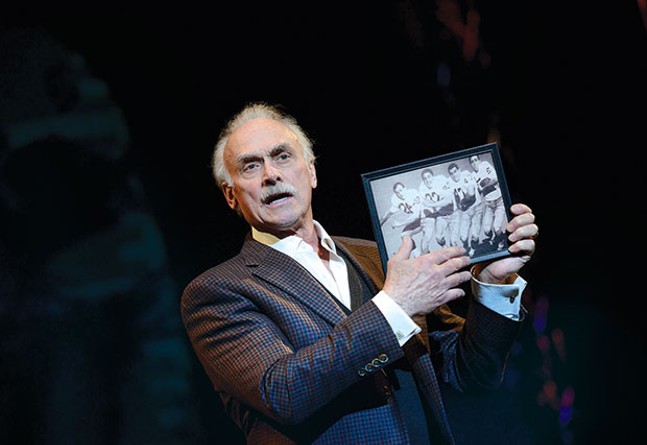 Steelers lore from the 1970s is an infinitely renewable resource, and few tap it like Pittsburgh Public Theater. The company’s multi-year hit The Chief was a one-man show about Art Rooney Sr.; now it brings back Rocky Bleier to reprise The Play, his one-man show written by Gene Collier. The Steelers icon winningly tells his remarkable life story, including his service in Vietnam and his near-legendary comeback from a catastrophic injury to star on four Super Bowl-winning teams. The hit show, which debuted last year, gets nine performances only. Bill O’Driscoll 7 p.m. Continues through Sun., Jan. 6. 621 Penn Ave., Downtown. $60-80. 412-316-1600 or www.ppt.org 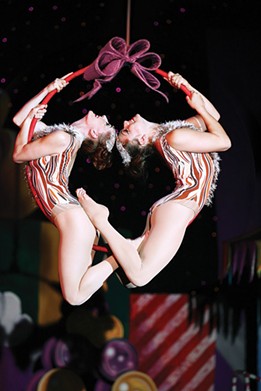 The New York Daily News has called Cirque Dreams Holidaze “[a] delicious confection of charm, sparkle and talent by the sleigh load.” Tonight and tomorrow, Cirque comes to the Benedum Center for three shows as part of its 10th-anniversary tour, courtesy of the Pittsburgh Cultural Trust. The production features more than 300 costumes, with acrobats performing gravity-defying feats while dressed as snowmen, penguins, candles, reindeer and toy soldiers. The production is conceived and directed by Neil Goldberg. AR 7:30 p.m. Also 2 and 7:30 p.m. Sat., Dec. 30. 237 Seventh St., Downtown. $40.25-60.25. 412-456-6666 or www.trustarts.org

Let’s face it: The ideal time to see a live radio play called “The Killbot That Saved Christmas” was probably at this time last week, when the nonstop holiday music was turning your brain into figgy pudding. But as some of us learned around the Christmas tree, you can’t always get what you want. Instead, visit Unplanned Comedy Pittsburgh tonight to see murder-mystery comedy “Killbot” and another short comedy by formerly Pittsburgh-based writer Abby Danger Denton: “Ladyfingers,” “a cynically repurposed sitcom plot about anarchists, baked goods and the merits of a gynocracy.” The show features local actors, standup comedy sets by Shannon Norman and Isaac Crow, and live music by Midge Crickett. BO 8 p.m. 5001 Butler St., Lawrenceville. $5. www.facebook.org (“kill-bot Christmas”)

A local institution goes by the wayside as Prosody bids goodbye. WESA 90.5 FM has canceled the on-air, full-length version of the locally produced public-radio showcase for poets and writers, though the show will live on as a podcast, and continue with shorter on-air spots. Today’s farewell episode features the program’s longtime host and producer, poet Jan Beatty, welcoming poet and Pitt Poetry Series editor Ed Ochester along with John Schulman, who co-hosted Prosody when it debuted (on WYEP) 28 years ago. BO 4:00 p.m. www.wesa.fm

We know, you’re not supposed to talk politics around the Thanksgiving or Christmas tables. But how about on New Year’s Eve Eve? In a theater? John McIntire is betting on it. Tonight, at the Oaks Theater, the local pundit and comedian addresses the ever-more-bizarre political climate in an edition of his John McIntire Dangerously Live Comedy Talk Show that’s modestly themed “Everything’s Insane.” His all-star panel of guests includes Pittsburgh Mayor Bill Peduto, Braddock Mayor and candidate for lieutenant-governor John Fetterman, and Pittsburgh Post-Gazette columnist Tony Norman. The venue has a bar, in case you need one. BO 8 p.m. 310 Allegheny River Blvd., Oakmont. $17-25. www.theoakstheater.com

Celebrate 2018 at the Children’s Museum of Pittsburgh with Countdown to Noon, an alternative New Year’s celebration for those who can’t stay up until midnight. Help the little ones make their own noise-makers or party hat in the MAKESHOP, and resolve to be kinder in 2018 in the Art Studio. Enjoy live music by Lee Robinson and Iska at noon, get interviewed by Saturday Light Brigade emcee Larry Berger, and meet Mo Willems’ children’s book characters Elephant and Piggie. AR 10:30 a.m.-1 p.m. 10 Children’s Way, North Side. $14-16 (free for children under 2). 412-322-5058 or www.pittsburghkids.org 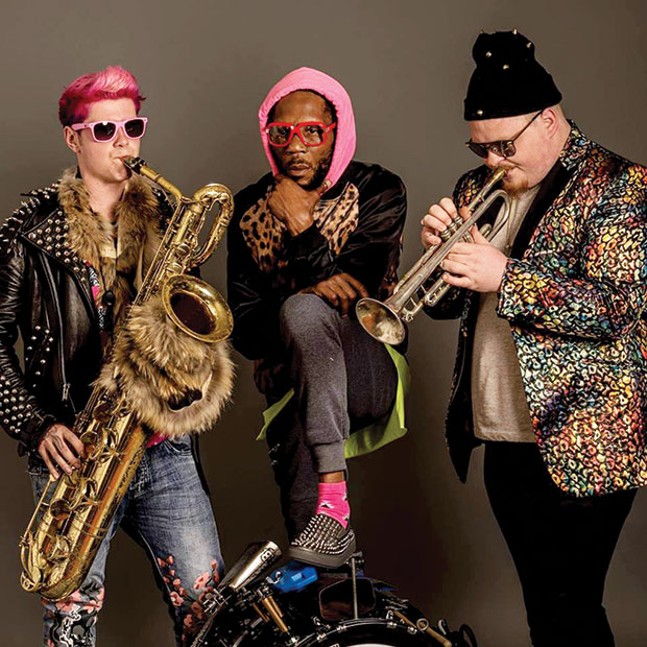 Maybe you’ve heard (of) Too Many Zooz. The funky brass-and-percussion trio — they call it “brass house” — made their bones busking in New York subways, went viral via YouTube in 2014, and in short order were doing sessions on Beyoncé’s Lemonade and backing her at the 2016 CMA Awards. Well, that guy on baritone sax? He’s Leo Pellegrino, born and raised in Pittsburgh. He’s back for the holidays, and the band — also including trumpeter Matt Doe and percussionist David Parks — bring their wacky outfits (and Pellegrino’s crazy-legs dancin’) to the Rex Theater for an all-ages New Year’s show. You Bred Raptors? and Afro Yaqui Music Collective open. BO 9 p.m. 1602 E. Carson St., South Side. $25-30. www.rextheater.net

Four years ago, when Hilary Brown launched the Grown Ass People Party, she had no idea how much demand existed for real parties (not fundraisers) for people over 30 who like diverse crowds, good music and dancing. G.A.P.P. events were regularly topping 300 guests when they went on unexpected hiatus this year. Now G.A.P.P.’s back, at a bigger, brand-new venue. G.A.P.P. NYE, at the North Side’s Hip@the Flashlight Factory, features tunes by DJ Loyal, an open bar, all-night nacho bar and, at midnight, live Brazilizian-style-percussion thunder from Timbeleza. BO 9 p.m.-2 a.m. 831 W. North Ave., North Side. $75 ($100 at the door). www.facebook.com (“grownass people”)

Most New Year’s celebrations are indoors affairs. But one of the latest to get rolling this year takes place in the woods. The family-friendly First Night Hike at Jennings Environmental Education Center starts at 10:30 p.m., as the state park’s staff and assistants lead an easy one-mile walk on prairie trails beneath a nearly full moon. Hot cider and cocoa around a campfire follow around a midnight campfire. BO 10:30 p.m.-12:30 a.m. 2951 Prospect Road, Slippery Rock. Free. 724-794-6011 or www.dcnr.pa.gov 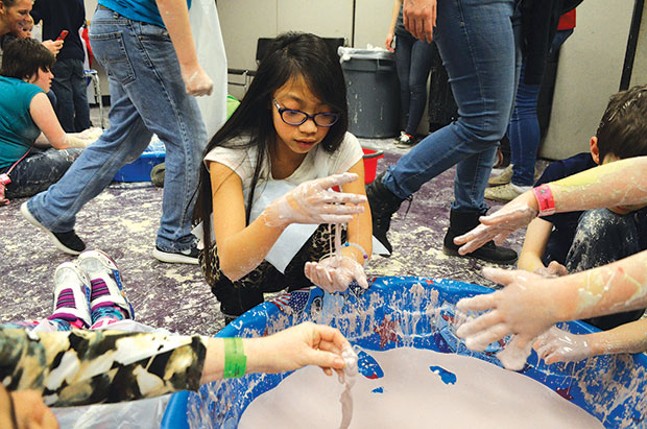 Hey, there’s gonna be slime, muck and goo on the North Side today, and we’re not talking about a wintertime Kenny Chesney concert! Rather, it’s the tradition of contained messiness of the Carnegie Science Center’s 12th annual MessFest. For the price of general admission to the Center, visitors of all ages can play with that squelchy Oobleck stuff; design a way to keep a raw egg from destruction on the Egg Zipline; finger-paint; compete in a pudding “pi”-eating contest; and more. There are also demonstrations involving explosives and other untidy happenings. Dress appropriately. BO 10 a.m.-5 p.m. $11.95-19.95. 1 Allegheny Ave., North Side. 412-237-4300 or www.carnegiesciencecenter.org