Ice-skating outdoors is pretty much confined to a few months in winter, but this week it’s a recreation as good as any, and better than most. The region’s most accessible outdoor rinks include the venerable Schenley Park Skating Rink, where for $3-5 each (and just $3 more for skate rental) you can while away an afternoon or evening circling the frozen pond. The rink is open daily, and as late as 11:30 p.m. for adults-only sessions on Tuesdays, Fridays and Saturdays; discount events include Thursday Family Nights and thrice-weekly College ID Sessions.

Other affordable options (especially for Allegheny County residents, who get favorable pricing) include the public rinks in North Park and South Park. The latter, unfortunately, remains closed for renovations, though it’s expected to open later in the season (with improvements including a new “skate trail”). But the North Park rink is operating as usual, with late, adult-only hours on Fridays and Saturdays, and, on Wednesdays, both morning senior skates and early-evening discounted family skates.

A little pricier, but perhaps most accessible of all for many, is the MassMutual Pittsburgh Ice Rink, in Downtown’s PPG Place. A seasonal tradition in this location since 2001, the rink is open daily 11 a.m.-10 p.m., and until midnight on Fridays and Saturdays. (It even keeps regular hours on Christmas and New Year’s Eve.) Admission is $7-8, with $4 skate rental, and special events include this season’s final Skate with Santa, 2-4 p.m. Sat., Dec. 23.

And if you can’t make it out this holiday week, don’t worry: All these outdoor rinks remain open well into February. 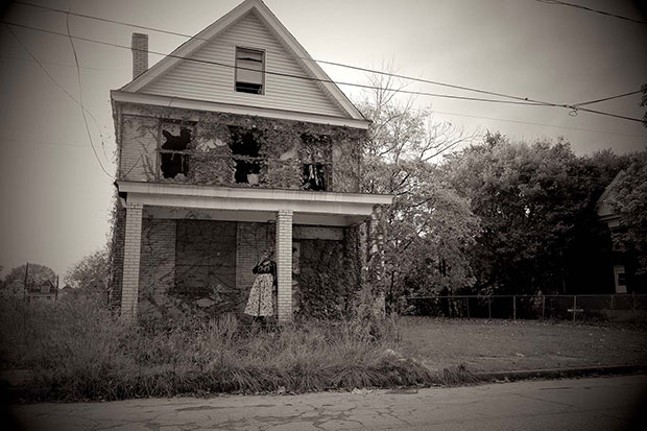 Celebrate the shortest day of the year tonight with Venture Outdoors on its yearly Winter Solstice Hike. Along the moderately challenging, guided four-mile hike through rambling and woodsy Hartwood Acres Park, you’ll occasionally stop to gaze at the stars, listen for any night critters that haven’t slipped off into hibernation, and learn fun facts about the park itself. Bring a flashlight or headlamp, cold-weather gear and trail shoes or hiking boots to traverse through the cold. Amanda Reed 6:30-8:30 p.m. 200 Hartwood Acres, Allison Park. $12. 412-255-0564 or www.ventureoutdoors.org

Many know him as Overton “Obie” Wakefield Jones on the 1990s sitcom Living Single, but comedian John Henton is no one-trick pony. He’s also appeared on The Tonight Show With Jay Leno and Late Night With Conan O’Brien, and starting tonight, he takes to the Pittsburgh Improv stage for five shows over three nights of laughs. Expect jokes about fatherhood, golf and perhaps even Henton’s stint as a guest star on Hannah Montana. AR 8 p.m. Also 7:30 and 9:45 p.m. Fri., Dec. 22, and 7 and 9:30 p.m. Sat., Dec. 23. 166 E. Bridge St., West Homestead. $20. 412-462-5233 or www.pittsburgh.improv.com 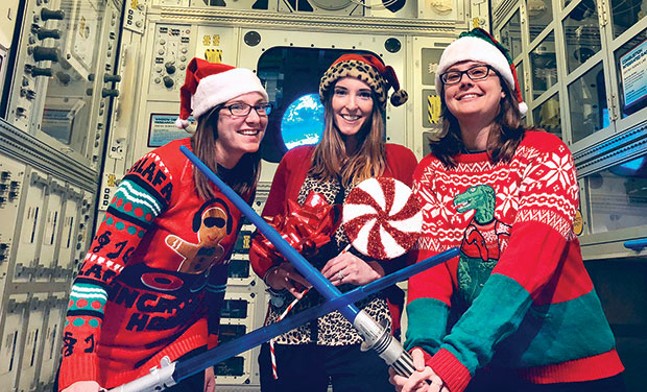 Grab your ugly holiday sweater from the depths of your closet for a 21+ Ugly Sweater Party tonight at the Carnegie Science Center. As part of the Center’s Science After Dark programming, you can sing laser karaoke in the Buhl Planetarium or (for the price of a separate ticket) watch Star Wars: The Last Jedi in the brand-new Rangos Giant Cinema. Also, don’t miss the ugly-sweater fashion show, giant beer pong, a laser-cut-holiday-ornament workshop, and more. AR 6-10 p.m. 1 Allegheny Ave., North Side. $12-17. (Tickets to Star Wars: The Last Jedi are an additional $9.95). 412-237-3400 or www.carnegiesciencecenter.org

“No one told me love is a corpse,” confesses Joanna Lowe in “All My Available Space,” a track combining spoken word with dark, atmospheric music: acoustic drums, electronic soundscape. The talented Pittsburgh-based theater artist and producer has been developing a new project, and tonight is the “band reveal” for Joanna Lowe and The Broken Word. With keyboardist Jim Barr, guitarist Brian Sproul, bassist Corry Drak and drummer Jeremy Papay, an intriguing evening awaits at Club Café. Brewer’s Row opens. BO 7 p.m. 56-58 S. 12th St., South Side. $10-12. 412-431-4950 or www.clubcafelive.com 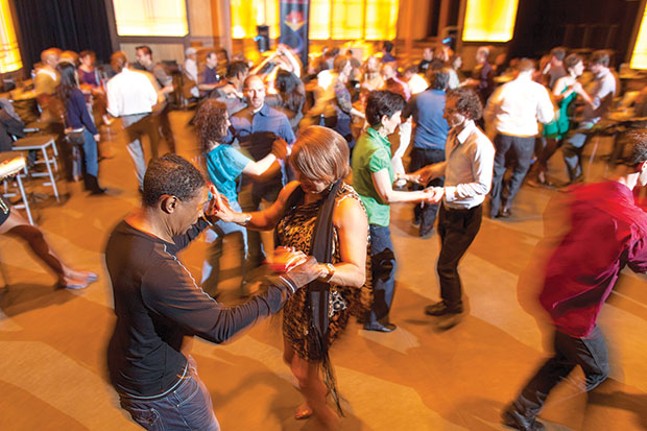 Benny Benack III’s annual holiday gig back in his hometown is a little more special than usual this year. In September, the acclaimed Pittsburgh-native trumpeter, vocalist and composer released his first solo album, One of a Kind. It’s yet another milestone for the New York-based artist whose résumé already includes stints with all the major big bands, international gigs, and even a spell as touring trumpet soloist for Josh Groban. The new album is getting strong reviews; Jazz Weekly called it “[u]pscale and sleek.” Tonight, Benack, who sings in a crooner style, takes a break from headlining at top New York City venues as he and his band play Downtown’s Backstage Bar for the Pittsburgh Cultural Trust’s JazzLive series. Admission to Benny Benack & Friends is free. BO 5-8 p.m. 655 Penn Ave., Downtown. Free. www.trustarts.org

It wouldn’t be Boxing Day in Pittsburgh without basketball — or at least without the Harlem Globetrotters making their traditional visit. The squad’s feats this year include a Guinness World Records nod for most half-court shots by a team in one hour. (They sank 348, in Times Square.) Today, the ’Trotters play two games against the perennially hapless Washington Generals at PPG Paints Arena, a matinee and an evening match. BO 2 and 7 p.m. 1001 Fifth Ave., Uptown. $18.75-80.25. www.ticketmaster.com

You never know where a musical idea will lead. In 2008, Jeff Berman, Sue Powers and Mimi Jong formed AppalAsia, with Berman on dulcimer, Powers on banjo and vocals, and Jong playing the erhu, a traditional two-stringed Chinese bowed instrument. The music, by turns pretty, playful and haunting, combines traditional American mountain sounds with those of the Far East, and it has graced the local scene, and venues throughout the Northeast U.S., ever since. In a concert marking the eve of the group’s 10th annivesary next year, AppalAsia performs tonight at Chatham Village Club House. Admission is donation-requested; proceeds will go toward a planned new album, new music intended for which the musicians will showcase. BO 7 p.m. (doors at 6 p.m.). 655 Pennridge Road, Mount Washington. Donation requested: $15 or more. www.appalasia.com

Join the Allegheny County Parks Department tonight for wintry stargazing in North Park. The night begins at the Latodami Nature Center, where you’ll receive a star chart and learn some basic information about stargazing. Then, hike to an observation post in the upper fields to see the full moon up-close with the aid of a telescope. This event is geared toward children 10 and up. Dress warmly, wear sturdy shoes and bring a flashlight. Pre-registration is required. AR 6:30-8 p.m. 303 Pearce Mill Road, Allison Park. Free. 724-935-2170 or www.county.allegheny.pa.us

One of the city’s best comedy deals is the Pittsburgh Improv Jam, held Thursdays year-round at Downtown’s CLO Cabaret. As an institution, the Jam helped kick-start Pittsburgh’s now-burgeoning improv scene: It was, for instance, where the performers who launched Arcade Comedy Theater first got together. Nowadays, the late-night, 21-and-over Jam is hosted by popular improv troupe Well Known Strangers, who assemble on-the-spot improv teams that include experienced improvisers, beginners and even first-timers to create comedy scenes based on one-word audience suggestions. (Sign-ups are at 9:30 p.m. in the Backstage Bar; the Jam is free for performers.) The Strangers or another established troupe opens each show. And tickets are only $3 at the door — or free with a ticket stub from elsewhere Downtown that evening. BO 10 p.m. 655 Penn Ave., Downtown. $3. 412-325-6769 or www.trustarts.org