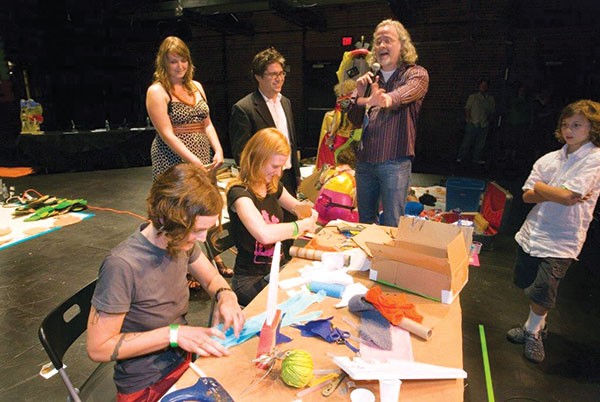 For a venue that hasn’t officially opened, Neu Kirche Contemporary Art Center’s been pretty busy. The center, occupying Deutschtown’s historic former Immanuel Church, has hosted events including the recent Deutschtown Music Festival. But on Aug. 29, it’s wrapping its own summer season of concerts and art exhibits with its official, all-day Opening Celebration. The program includes a walking tour of Neu Kirche-related art and gardening projects Fallow Grounds and New City; the opening of art exhibition In the Making, about the creation those projects; and a wearable-art performance by Hannah Thompson. Another highlight is the latest iteration of artist Tom Sarver’s long-running series Art Olympics, which combines live art-making with theatrics borrowed from game shows, reality TV and arena sports. Starting at 4 p.m., three teams of artists — led by Maritza Mosquera, Darrell Kinsel and Craig Freeman — will have two hours to build sculptures out of “random junk materials.” (A scene from a previous AO is pictured.) Judges will rate the teams on their performances as well as the finished products; the family-friendly festival atmosphere includes art-making activities for the audience. Neu Kirche was purchased in 2014 by a group of artists who are especially committed to creating opportunities for women artists. Aug. 29 is a good chance to bid them welcome. Bill O’Driscoll Noon-10 p.m. Sat., Aug. 29. 1000 Madison Ave., Deutschtown. Free. www.neukirche.org

In the history books concocted by artist Matthew Buchholz, T. Rex roamed the bucolic riverbanks of Hartford, Conn., and the occasional 19th-century Wyoming cowboy was a big-headed emigrant from Mars. Tonight, Buchholz’s Alternate Histories Project — which has been featured in media from NPR to Boing Boing and Entertainment Weekly, and exhibited internationally — marks its fifth anniversary with the 5 Years 50 States Pop-Up Art Show, at East End Brewing. The exhibit includes prints representing every state in the Union and the premiere of 14 new prints. Plus birthday cake. And beer. Bill O’Driscoll 4-8 p.m. 147 Julius St., Larimer. Free. www.alternatehistories.com

Julie Goldman, self-professed “worst lesbian in the world,” is sure to raise some eyebrows as well as laughs during her performance tonight at Cruze Bar. Goldman is known for her observational humor and cultural criticism delivered in a brash style. (The Village Voice called her “charmingly deviant.”) Her standup has been featured on the likes of Showtime and Comedy Central, and she’s guest-starred on shows including The Mindy Project and Happy Endings. The show is presented by iLaugh Pittsburgh; local comics Whitley Baker and Chrissy Costa will open. Joseph Peiser 8 p.m. 1600 Smallman St., Strip District. $20. www.brownpapertickets.com

If there were a Harvard of comedy, Chicago’s Second City would be it, plus Yale too. Second City’s latest foray into Pittsburgh is Fully Loaded, at Pittsburgh Public Theater, a night of sketches, improv and songs performed by members of the legendary comedy troupe. Directed by Ryan Archibald, Fully Loaded blends new material as well as classic set-ups written by such Second City alums as Stephen Colbert and Tina Fey. The touring cast features Adam Schreck, who grew up in Bethel Park (and who is pictured here with fellow cast member Jo Feldman). JP 8 p.m. Also 5:30 and 9 p.m. Sat., Aug. 29. 621 Penn Ave., Downtown. $15.75-30. 412-316-1600 or www.ppt.org

One of late summer’s bigger art showcases here is Shadyside … The Art Festival on Walnut Street. The 19th year of the two-day fest features original handmade art in a wide range of media by 200 artists from 30 states. The festival, which includes live music, is hosted by the Shadyside Chamber of Commerce and put on by Florida-based, nationally operating Howard Alan Events. The event shuts down Walnut between South Aiken and South Negley. BO 10 a.m.-7 p.m. Also 10 a.m.-5 p.m. Sun., Aug. 30. Shadyside. Free. www.artfestival.com

A few thousand bicyclists will take to the streets today for Pedal Pittsburgh. The city’s oldest and largest bike ride, organized by Bike Pittsburgh, marks its 22nd year with rides for every age and fitness level. A 2.5-miler along Mon riverfront trails is perfect for young kids. A 25-mile option loops through Oakland, Highland Park, the Strip and the North Side. And for the hardiest riders, a 62-miler covers most of the city, including some of its steepest hills and finest views. (It’s also a tour of some of the new bike infrastructure BikePGH has spent 11 years advocating.) You can also do a custom ride of any length in between. Riding in groups is encouraged. The rides have staggered start times, but all start in South Side Riverfront Park and end there, with the Finish Line Festival. BO 6:30 a.m.-3 p.m. South Side. $35-40 (kids under 18: $15). www.pedalpgh.org

From cornets to tubas, it’s a brassy night as the River City Brass Band visits the Allegheny County Summer Concert Series, at Hartwood Acres Park Amphitheater. The long-running group — 25 brass pieces, three percussion — is probably best known for its marches by the likes of John Philip Sousa. But tonight’s eclectic program also includes everything from the big-band jazz of Glenn Miller to “Eye of the Tiger” and tunes by Chicago — “something for everybody,” promises RCBB music director James Gourlay. The concert is free. BO 7:30 p.m. 200 Hartwood Acres, Allison Park. Free. 412-767-9200 or www.alleghenycounty.us

The Pittsburgh Symphony Orchestra ventures outside Heinz Hall and into community venues all across Pittsburgh over the course of its Neighborhood Week. The five-day series kicks off today at Soldiers & Sailors Memorial Hall with a Salute to Veterans, featuring guest conductor Lawrence Loh leading the orchestra through a program that includes the “Armed Forces Salute” and “Danny Boy.” A full schedule of these affordable performances and their locations, from the South Side to the North Side, can be found at pittsburghsymphony.org/neighborhood. JP 7 p.m. (4141 Fifth Ave., Oakland: $10-15). Series continues through Fri., Sept. 4 (admissions range from free to $15). 412-392-4900 or pittsburghsymphony.org

If you expect nothing else from the new Boxheart Gallery exhibits by locally based artists Brenda Stumpf and Daria Sandburg, expect texture. Stumpf, a recent transplant from Denver, evokes “mythic and historic figures, sacred texts and alchemy” with materials ranging from the paper from steeped tea bags to torn old dresses; her Between Worlds summons women ranging from Pandora and Hatshepsut to the victims of Jack the Ripper. In The Journal of Repetitive Learning, Sandburg employs found historical objects, sculpted metal work, fused glass and more to evoke human narratives. The show opens today. A public reception is scheduled for Sat., Sept. 5. BO 11 a.m.-6 p.m. 4523 Liberty Ave., Bloomfield. 412-687-8858 or www.boxheartgallery.com